“Forgot to mention: first long, hot shower since December. That felt so good! Step 1 of Return to Earth complete,” Hadfield tweeted on Tuesday during a flight stopover in Scotland.

Hadfield and NASA astronaut Tom Marshburn were flying to Houston, Tex., Tuesday after touching down along with Russian cosmonaut Roman Romanenko in Kazakhstan. Romanenko has headed back to his home base of Star City, Russia.

Moments after he plunged through the atmosphere and parachuted to Earth in a Soyuz rocket capsule, Hadfield phoned his wife Helene to tell her he was home safe and that he loved her.

The last one to be removed from the capsule upon landing at 10:31 p.m. ET, Hadfield smiled and gave a thumbs-up as medical staff checked his vital signs. Moments later he was speaking with his wife via cell phone.

Speaking to CTV's Canada AM from Houston, Helene Hadfield said she was glad her husband chose to call her before anyone else.

"He sounded so great on the phone, he just wanted to tell me he loved me, he was feeling really good. He said they were joking and laughing and hoo-hooing all the way down -- just like they do for everything. And when you saw Roman and how joyous he was, you could tell they had a great time," Helene said.

Canadian astronaut David Saint-Jacques said Tuesday that Hadfield and Marshburn are returning to Houston quickly so they can be reunited with their loved ones.

“After five months in space, they are very much looking forward to seeing their families again,” Saint-Jacques told CTV News Channel from Houston. “So that’s one of the reasons why we rush them back home if they’re medically fit.”

Both Hadfield and Marshburn appeared pale after they were pulled from the capsule, while Romanenko was smiling and chatting happily with medical and other personnel who greeted the men when they arrived.

Saint-Jacques said that was “totally to be expected” given what astronauts endure as they return to Earth.

“Coming back to Earth, it’s quite a surprise for your body after five months without gravity,” he said. “Suddenly your heart, your lungs, your inner ear, everything is using gravity again, they have to pump blood harder to your head. That’s one of the reasons we try to sit them down and not move them too much.”

Helene Hadfield said she doesn't worry about her husband while he's in space, despite the high level of risk involved in his work.

"If I did, I would go crazy. You can either spend your time worrying or spend your time enjoying the whole process and knowing Chris was loving every second of the time. For me to worry, it would be counterproductive because it would take away from his joy," she said.

"And I trust him. I trust that he can fix things and he knows what's going on and he's trained for so many years and he's so competent. But most of all, I just know that he loves what he does so it doesn't matter what the risks are."

When asked how she planned to celebrate Hadfield's return after five months, Helene said "that might have to be a little bit of a secret" adding that it might not be appropriate to share on "morning television."

During his five months in space, Hadfield helped conduct more than 100 science experiments, shared stunning photos of the Earth with a growing legion of Twitter followers and even recorded music in space. In one of his final acts aboard the ISS, his version of David Bowie’s Space Oddity -- posted online Sunday -- garnered more than 6.6 million hits on YouTube by Tuesday morning.

Hadfield also became the first Canadian ever to command the International Space Station. 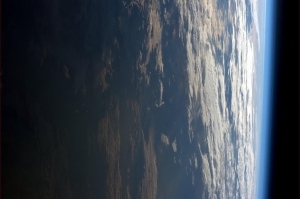 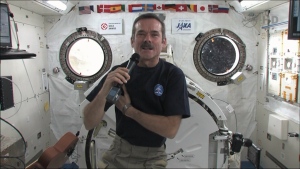