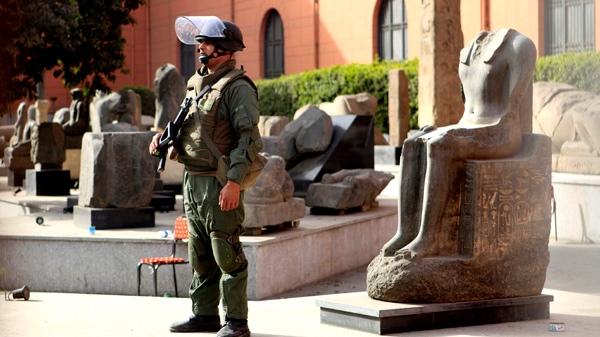 CAIRO -- Egyptian officials sought to project an upbeat tone on Monday by celebrating the 113th anniversary of the Egyptian Museum, home to the world's most extensive collection of Pharaonic antiquities, as the country grapples with a plunge in tourism following last month's Russian plane crash.

"Welcome to Egypt," Antiquities Minister Mamdouh el-Damaty said at the celebration outside the museum in the heart of Cairo, where officials and performers outnumbered tourists.

Battered by years of political turmoil, Egypt's tourism sector took another blow after the Oct. 31 crash in the Sinai Peninsula, which killed all 224 people on board, mostly Russian vacationers returning home from Sharm el-Sheikh on the Red Sea.

An investigation into the crash, which Western officials say may have been caused by a bomb, is still ongoing. But the U.K. has banned flights to Sharm el-Sheikh, while Russia banned all flights to Egypt.

El-Damaty nevertheless sought to project optimism, referring to last week's announcement that thermal scanning of the Great Pyramid in Giza could lead to new discoveries about its construction.

"We always have new things when it comes to antiquities," he said.

El-Damaty said a new museum being built by the Pyramids, known as The Grand Egyptian Museum, will partially open in May 2018. The sprawling complex has been under construction for 13 years and was supposed to open this year, but repeated delays have pushed the date of the full opening to 2022.

It will house the full collection of King Tutankhamun's treasures, as well as other artifacts that have been kept in storage because of lack of display space. Around 30 per cent of the existing museum's artifacts, some 120,000 pieces, are in storage, said el-Damaty.