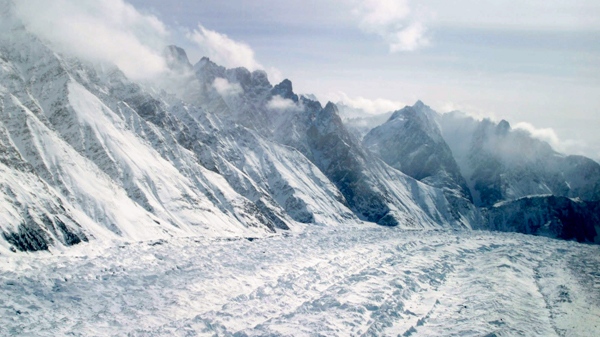 An aerial view of the Siachen Glacier, which traverses the Himalayan region dividing India and Pakistan, is seen on Feb. 1, 2005. (AP / Channi Anand, file)

TORONTO -- A new study suggests climate change is one of the many factors that could threaten the fresh water resources for 1.9 billion people globally.

The study, released Monday in the journal Nature and in partnership with National Geographic and Rolex, found the world’s 78 mountain-based glacier systems, known as “mountain water towers,” are at risk due to climate change, over population and mismanagement of water resources.

These mountain water towers are critical to the world’s water supply because they store and transport fresh water to communities through glaciers, lakes and streams.

The researchers, comprised of 32 scientists from around the world, assessed the 78 water towers and ranked them based on how much people in the area rely upon them.

They found that the Indus water tower, located in the Himalayas and covering portions of Afghanistan, China, India and Pakistan, is both the most relied-upon system and also one of the most vulnerable. The Rocky Mountains water tower was labelled as the most important in North America.

The researchers are calling for international conservation efforts and climate change policies to be made in order to properly protect these water systems.