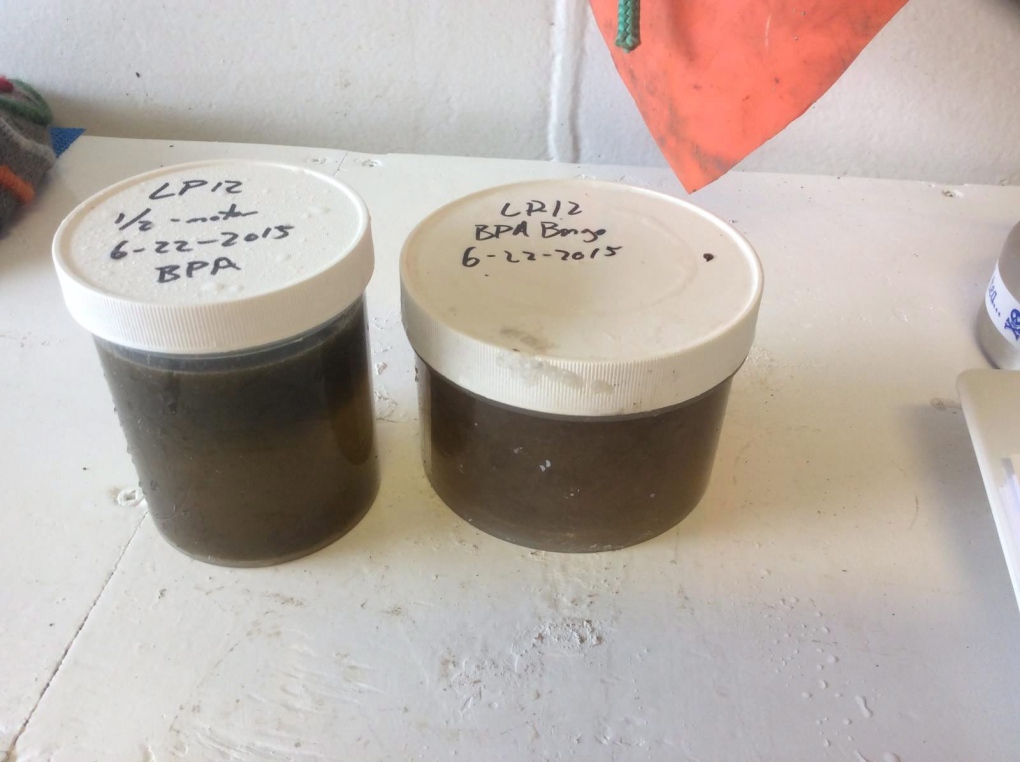 In this undated handout photo provided by NOAA Fisheries, samples of sea water containing a brownish toxic algae sit in labeled jars aboard a research vessel off the Washington Coast. (NOAA Fisheries via AP)

The research on the presence of algae toxins in marine mammals along the Alaska coastline holds a warning for British Columbia, said study author Kathi Lefebvre.

"It's the same coastline," said Lefebvre, a biologist with the U.S.-based National Oceanic and Atmospheric Administration. "Those regions are at risk in the same way as were Alaska and Washington."

Lefebvre and her colleagues studied the carcasses of more than 900 Alaskan mammals from seals to whales to look for the presence of domoic acid and saxitoxin, two common and potentially lethal algae-produced toxins.

Those toxins have been found before in Canadian waters. In 1987, more than 100 people became ill and several died after eating tainted mussels in Prince Edward Island.

Blooms of the algae that produce those toxins are increasingly common in California, where they regularly poison sea lions. And saxotoxin has long been present in shellfish in some parts of Alaska.

But a sea lion suffering from domoic acid poisoning, which causes seizures and death, had never been found north of California -- until last year when one was found in Washington.

"There was a big bloom of domoic acid (that) year," Lefebvre said.

"The concern is that it was correlated with the warmer waters. Is this what the future holds? If we have continued warming water, will there be more toxic blooms? Will they be moving North?"

It turns out they already have.

Of the 13 Alaskan mammal species examined in Lefebvre's work, low levels of domoic acid was found in all of them and saxotoxin in 10 of them.

"We really did not expect to see it in all these animals everywhere," Lefebvre said. "We don't know if these animals had high enough doses to have health impacts. We just know that the toxins were present.

"This tells us the risk is there. They may not be in high enough concentrations yet to cause health impacts, but our question is what does the future hold in terms of increasing algae blooms as the waters warm?"

The temperature of Alaskan waters has gone up by almost three degrees over the last decade.

Lefebvre acknowledges her study, which depended on carcasses harvested by hunters or washed up on the beach, doesn't indicate whether toxin levels are stable or growing.

"We are monitoring more so we're going to see more," she said. "But in general we do know that the conditions are changing to be more favourable for algal blooms."

Even if the blooms don't kill sea mammals, they're one more stressor in a changing environment.

More research is needed into how the toxins move through the food web, as well as on trends in algal blooms over time. Scientists also need to ask if changes in toxin levels are linked to climate changes.

"This is something we need to pay attention to and it could become a bigger issue."