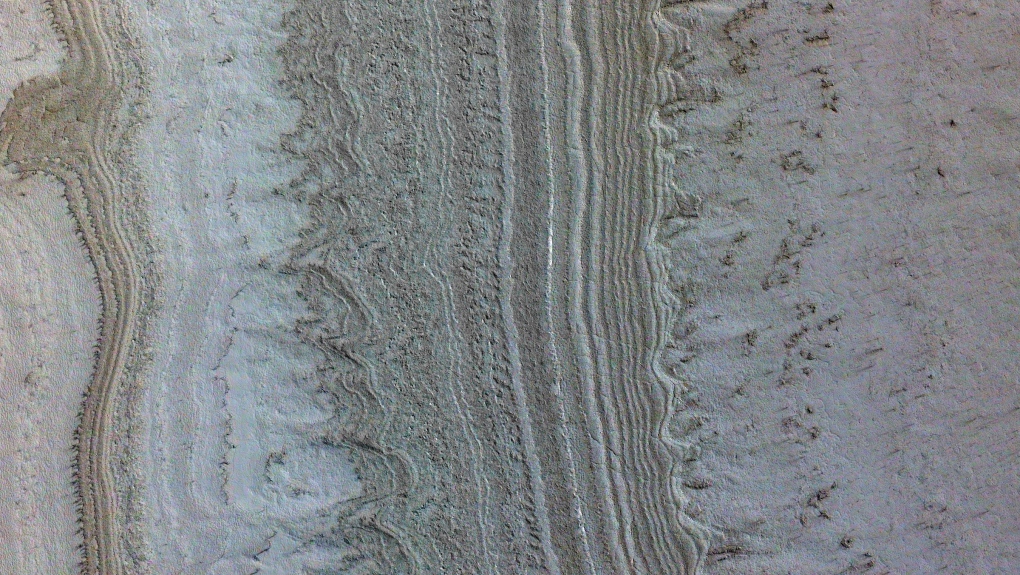 Spectral colour map from the CRISM instrument on Mars Reconnaissance Orbiter draped over HiRISE imagery at the edge of the south polar ice cap. Specific colors from this map indicate the presence of smectite clays. (Photo courtesy NASA/JPL/UA)

TORONTO -- A new study suggests that clay minerals are the cause of radar reflections below the South Pole on Mars after initially being attributed to liquid water.

Researchers at Toronto's York University have found that smectites, a common type of clay, can explain the radar signals, casting doubt on their being subsurface lakes on the red planet.

"Since being first reported as bodies of water, the scientific community has shown skepticism about the lake hypothesis and recent publications questioned if it was even possible to have liquid water," lead researcher and York University assistant professor Isaac Smith said in a press release.

In 2018, the MARSIS instrument aboard the European Space Agency’s (ESA) Mars Express orbiter found evidence of subsurface lakes deep below the ice cap on the southern side of Mars, lending to the possibility of a potentially habitable environment.

According to NASA, radar signals, which can penetrate rock and ice, change as they are reflected off different materials.

"In this case, they produced especially bright signals beneath the polar cap that could be interpreted as liquid water," NASA said in a press release on Thursday.

While water ice is plentiful on Mars due to its cold climate, NASA noted that any water warm enough to be liquid on the surface would last for only a few moments before turning into vapour in Mars’ dry air.

Other studies have also demonstrated that the amount of salt and heat required to thaw ice at the bottom of the polar cap was much more than Mars provides, drying up the lakes hypothesis further.

The latest research, which involved scientists from York University, the University of Arizona, Cornell, Purdue and Tulane universities, used experimental and modelling work to demonstrate why smectites can better explain the radar observations.

In doing so, researchers also found "spectral evidence" that smectites are present at the edges of Mars' South polar cap.

"Smectites are very abundant on Mars, covering about half the planet, especially in the Southern Hemisphere," Smith said in the release. “That knowledge, along with the radar properties of smectites at cryogenic temperatures, points to them being the most likely explanation to the riddle."

According to the study, smectites are a type of clay that is formed when basalt -- a volcanic rock that comprises most of the surface of Mars -- breaks down chemically in the presence of liquid water.

Experiments done at York University measured the radar characteristics of hydrated smectites at room temperature as well as at cryogenic, or extremely low, temperatures. The data was then evaluated using code.

With these simulations, researchers found that frozen clays produce dielectric values that are large enough to make the reflections, matching those of the initial ESA radar observations.

As these clay minerals are both present at the South Pole and can cause the reflections, the team "believes this to be a more viable scenario than the presence of liquid water."

"Because the liquid water theory required incredible amounts of heat which is six-to-eight times more than Mars provides, and more salt than Mars has, it was already implausible. Now, the clays can explain the observations with absolutely no qualifiers or asterisks," Smith explained.

Stefano Nerozzi, co-author and a post-doctoral fellow at the University of Arizona and co-author, says the bright reflectors cannot be water because some of them continue from underground onto the surface.

"If that is the case, then we should see springs, which we don't," Nerozzi said.

Additionally, Nerozzi said data shows that multiple reflectors found on Mars are stacked on top of each other, with some even being found in the middle of the polar cap. He said this would be "physically impossible" if the reflectors were in fact water.

While the researchers note that it is disappointing that liquid water may not be present, they say the new findings may help aid future studies on the conditions of ancient Mars.

Purdue University associate professor and study co-author Briony Horgan said having detected possible clay minerals in and below Mars' South Pole is important as it confirms the ice has sediments that previously interacted with water.

"While our work shows that there may not be liquid water and an associated habitable environment for life under the cap today, it does tell us about water that existed in this area in the past," Horgan said.