Birds drunk on fermented berries get help sobering up 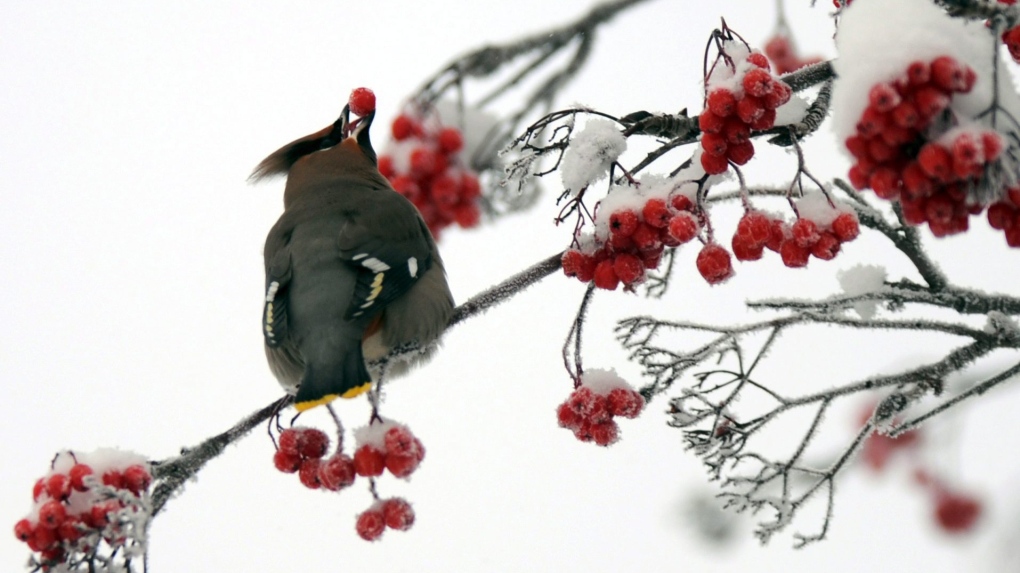 Yukon birds are eating frost-fermented berries and getting too drunk to fly straight, so Environment Yukon is helping them sober up.

The drunk birds have been accidentally flying into windows and walls, so the territory’s animal health unit is trying to nurse the injured ones back to health -- and sobriety.

Meghan Larivee of the Yukon’s animal health unit says the Bohemian waxwings have been eating fermented mountain ash berries, which grow on rowan trees often planted around people’s lawns or backyards. She says birds can behave erratically for a number of reasons -- including disease or injury -- but berry-drunk birds often show symptoms immediately after eating, and have traces of berry juice on their beaks.

“They are not very good at co-ordinating flight,” Larivee told CTVNews.ca by phone on Monday. “When they’re really drunk, they can actually go to the ground and have trouble taking off, and they’ll look like they’re stumbling around.”

She says they fall out of trees, but shakily recover before hitting the ground -- most of the time. They have trouble walking in straight lines, and sometimes struggle to even stand up.

But the real danger for the birds is when they become too drunk to navigate in the air, Larivee said. They begin to confuse windows and reflective surfaces for open air, and they can fatally injure themselves by flying directly into those obstacles.

Larivee says her team recently found three Bohemian waxwings showing signs of intoxication. Two of them died of injuries sustained from slamming into hard surfaces, while the third was “definitely stunned and not doing that great” when it was found, Larivee said.

Her team put the bird in a hamster cage “drunk tank,” and it sobered up after a few hours, she said.

Larivee said she also took in a pine grosbeak bird showing signs of intoxication, but it did not recover as well as the Bohemian waxwing. The bird was transferred to the Yukon Wildlife Preserve, where it is now showing signs of improvement, she said.

It’s not the first time this oddity has been observed. In November of 2012, a dozen blackbirds were found dead on a playground in the United Kingdom. Many of the birds showed signs of physical trauma, but animal experts found no signs of disease. However, they did find fermented mountain ash berries in the birds’ digestive tracts, said to have come from a nearby rowan tree.

They also found one bird in the area still alive, and showing obvious signs of disorientation. The blackbird reportedly couldn’t stand without using its wings for support, and often leaned against walls to stay up.

U.K. animal experts monitored the bird for two days while it sobered up, then released it.

A 2012 study published in the Journal of Ornithology found that waxwing birds actually have larger-than-normal livers to help them process the occasional meal of fermented berries. However, the bird’s system can still be overwhelmed by eating too many ethanol-infused berries.

The study observed that even though large flocks of the birds will descend on an area and eat all the berries there, only a few of the birds ever get intoxicated enough to become impaired.

Larivee says she sees similar behaviour in the Yukon ever year in November and December, as only a few birds from a large flock will actually become dangerously intoxicated.

“They eat so many of these berries that it even overwhelms their livers,” she said.

Larivee stressed that the birds pose no danger to humans.

Rowan trees can be found in many parts of North America, including Ontario and Quebec.

Anyone who observes a bird showing signs of intoxication is asked to call local wildlife authorities.