Arctic fox travels 3,500 km from Norway to Canada in only 76 days

A young Arctic fox has surprised scientists by walking from Norway to Canada in only 76 days, the species’ fastest journey of that length ever recorded.

The fox’s 3,506-kilometre journey began in Spitsbergen, the largest island in the Svalbard archipelago, which is located between mainland Norway and the North, on March 26, 2018.

Researchers from the Norwegian Polar Institute and the Norwegian Institute for Nature Research fitted the young female, which was under a year old at the time, with a GPS tracking device and unleashed it into the wild.

“The nice thing with this technology is that it allows us to track the fox in real time or near real time,” Arnaud Tarroux, a researcher for Norwegian Institute for Nature Research, told CTV News Channel from Longyearbyen, Norway on Tuesday.

The Fox reached Greenland after trekking for 21 days over 1,512 kilometres of ice-covered sea, according to research published in the journal Polar Research a week ago.

For the second leg of its journey, the pup set off northwest to Ellesmere Island in Nunavut.

“We didn’t think it was true,” mountain researcher Eva Fuglei from the Norwegian Polar Institute said in a statement.

Fuglei said they initially thought the fox had died or it had been carried to Ellesmere Island on a boat, but there were no boats that travelled through at that time.

“This is a rare event,” Tarroux exclaimed. “It doesn’t happen every year.”

The scientists weren’t surprised by the distance so much as the speed the fox travelled.

“She was walking actually pretty fast. Some days she was covering over 150 kilometres in a day,” Tarroux said.

The young pup averaged 46 km per day, though it managed to cover 155 km in one day, when it crossed an ice sheet in north-western Greenland.

“This is, to our knowledge, the fastest movement rate ever recorded for this species, 1.4 times faster than the maximum rate recorded in the previously reported long-distance movement of an adult male Arctic fox in Alaska,” the scientists said in the research paper.

Tarroux said they knew Arctic foxes can move quickly, but he said they didn’t think this particular pup would be able to travel that fast across the ice.

“We knew that they can move up to a 112 kilometres a day, that was actually the previous fastest pace that had been recorded, so we were expecting something in that kind of level,” he said.

The researchers said they believe the fox travelled faster on ice sheets than on land because there were less foraging opportunities.

The scientists also documented two breaks in the journey where the fox’s rate of speed dropped below 10 km per day. They attributed the stopovers to possible bad weather, physical barriers on the sea ice, or a feeding opportunity.

The fox’s current whereabouts are unknown because the GPS device stopped transmitting data in February 2019.

If it’s still in Canada, the researchers said the fox may have to adjust its diet because Arctic foxes primarily eat lemmings on Ellesmere Island. In Svalbard, foxes mainly consume marine food sources.

“When they’re here in Svalbard where we are now they eat mostly sea birds during the summer and then during the winter reindeer carcasses that they can find here and there in the tundra,” Tarroux said.

“When she reached Greenland, then she had access to another type of ecosystem. [An] ecosystem where you have small rodents available, lemmings, especially on Ellesmere Island.”

The young fox’s journey highlights the importance of sea ice in the species’ migration patterns, the scientists said.

“The sea ice plays a key role in the fact that mountain foxes will migrate between areas, meet other populations and find food,” Fuglei said.

The researchers said the connection between different Arctic fox populations may change as rapid warming in the North melts sea ice; thus, breaking the physical link between the groups.

“If Svalbard becomes ice-free throughout the year, it will imply an isolated Arctic fox population there, entirely cut off from other Arctic foxes,” the report said.

The paper notes, however, that cut-off Arctic fox populations in Iceland and the Beringian islands have continued to persist despite their isolation and warmer temperatures. 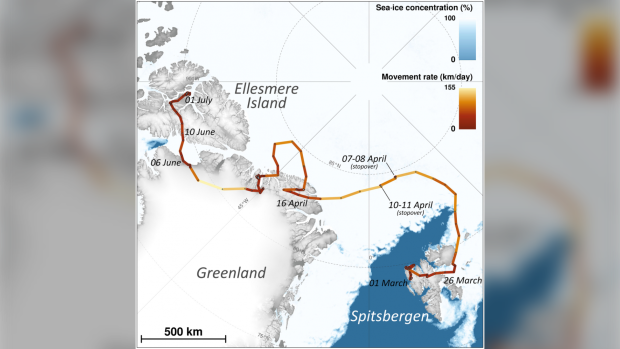 The fox's route from Norway to Canada is illustrated in this graphic. (Source: Arnaud Tarroux / NINA)