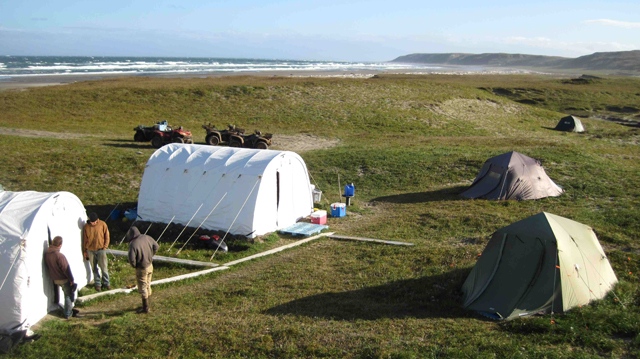 ANCHORAGE, Alaska -- A decades-old campaign to wipe dozens of Alaska islands clean of invasive arctic foxes is a step closer to wrapping up with an eradication effort this summer on a large, uninhabited island that's also home to hundreds of feral non-native cattle.

The just-completed work on remote Chirikof Island east of the Aleutian Islands nabbed 236 adult foxes, in addition to six juvenile foxes. That brings to 45 the number of larger Alaska islands where arctic, or red foxes in some cases, have been trapped or shot in an effort to restore the habitat for native species, including migratory birds.

The work was done between May 18 and Sept. 4 by the Alaska Maritime National Wildlife Refuge and the U.S. Department of Agriculture's Wildlife Services. It involved four trappers camping out on the 45.3-square-mile island. With the bulk of that task done, the refuge is closer to concluding an effort that began in 1949 after research showed that the seabird population was in decline on islands where the foxes had been introduced.

"It's a big deal," said Steve Delehanty, manager of the refuge, whose boundaries cover 2,500 islands around Alaska's coast. "It's been a marked success."

Refuge officials said foxes decimate birds, going after everything from eggs to adults, which are particularly vulnerable on the treeless islands. Foxes were blamed, in fact, for the elimination of what was formerly known as the Aleutian Canada goose -- now the cackling goose -- on islands where the animals had been introduced, according to a 2002 refuge report. Refuge officials say the endangered goose recovered after it was reintroduced to islands following the elimination of foxes there. The goose was delisted in 2000, refuge biologist Steve Ebbert said.

Trappers will return to Chirikof next summer to look for foxes, Ebbert said. Any foxes found would be killed.

Ebbert said three refuge islands with non-native arctic foxes remain in the Aleutians chain west of Chirikof. One other island still has with red foxes. None of these islands have been scheduled yet for eradications, Ebbert said.

The foxes are native to other parts of Alaska. They were first released for the fur trade by the Russians in the late 1700s on several islands in the Aleutian chain, where the arctic foxes proved to be better suited than the larger red foxes. Also, the arctic fox was deemed more valuable than red foxes, so ultimately more were introduced.

Different methods have been employed to kill the foxes. The most common method has been shooting and trapping. Poisons have been banned since 1972. In the mid-1980s, the refuge also cleared two islands after stocking them with sterilized red foxes, which hunt and kill arctic foxes.

"They took care of the arctic foxes for us," Ebbert said. "And then they had the good graces of dying of old age. So now we had two islands that were entirely fox-free."

The refuge has programs targeting other invasive species, including the hundreds of cattle on Chirikof, about 400 miles southwest of Anchorage.

Eradication plans for the hardy herd have been discussed in the past. But refuge managers are still trying to determine the fate of the animals that are descendants of cattle first introduced in the late 1880s to provide meat for whaling crews and fox traders. An aerial survey last fall counted more than 2,000 cattle, which have long gone without caretakers.