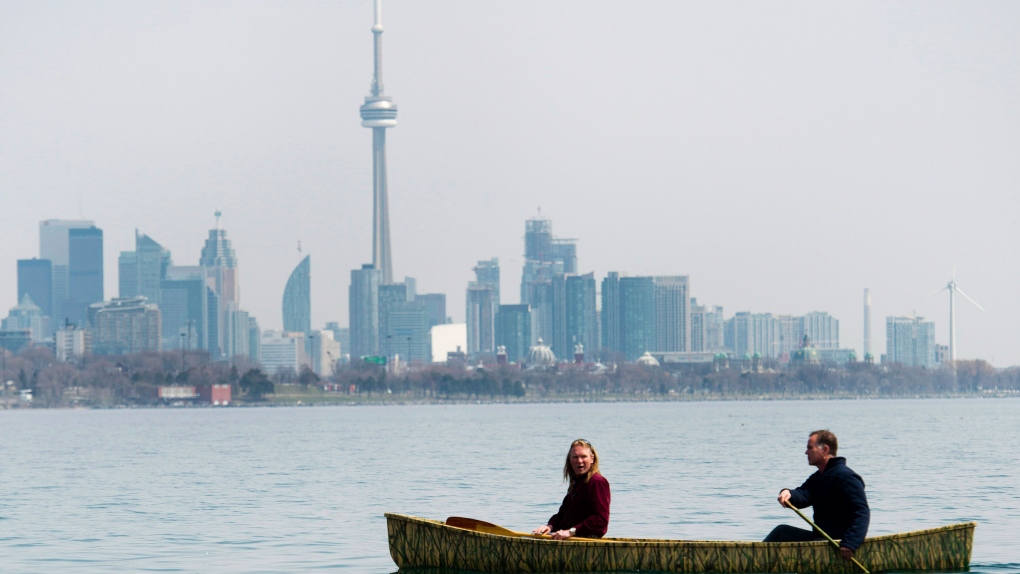 People take in the warm weather as they canoe on Lake Ontario near Humber Bay Park in Toronto on Monday, April 21, 2014. (Nathan Denette/The Canadian Press)

An Ontario researcher is calling on society to take swift action to solve the growing problem of plastics accumulating in the Great Lakes.

Gail Krantzberg, an engineering and public policy professor at McMaster University, has detailed her findings in a research review published recently in the new Journal of Waste Resources and Recycling.

"The population in the Great Lakes demographics is only going to grow, which means more plastic waste if we don't change quickly," Krantzberg said. "Once the microplastics are there, they're there."

She said the microplastic problem in the Great Lakes mirrors that of the oceans: small organisms mistake microplastics for plankton, and from there they work their way up the food chain.

She said the plastics work their way into the Great Lakes through two main routes: plastic bags that fly away from landfills and land in streams, eventually breaking down into smaller and smaller plastics that flow into the lakes; and through the sewer system.

Plastics from a wide variety of clothing and textiles come off during washing and head down the pipes toward the sewage treatment plants.

The typical sewage treatment process in Ontario does not capture those microplastics, Krantzberg said, and there is no known technology that can suck those plastics out of the lakes once they've entered them.

Sewage leaks -- such as the 24-billion litre, four-year leak in Hamilton that hit a watershed connected to Lake Ontario recently -- also do not help.

"You can be sure that's full of microplastics also," Krantzberg said.

She also noted that recycling systems have failed, and "a very small proportion of what's in the blue bin gets recycled."

However, Krantzberg said, government can help -- and she applauded Ottawa for banning microbeads that are common in facial scrubs.

"That is good progress, but it's only a small fraction of what gets into the lakes," she said.

Plastic grocery bags should also be banned, she said, at least at the provincial level, so that there isn't a patchwork system where some municipalities ban them while others do not -- or fees could be charged per bag.

"We found in other parts of the world, such as in the EU, a 15 cent per bag equivalent really reduced the number of plastic bags people are buying," Krantzberg said.

She also hopes consumers can change their behaviour, including using unbleached paper bags instead of plastic.

"You don't need plastic bags for a bunch of grapes," she said.