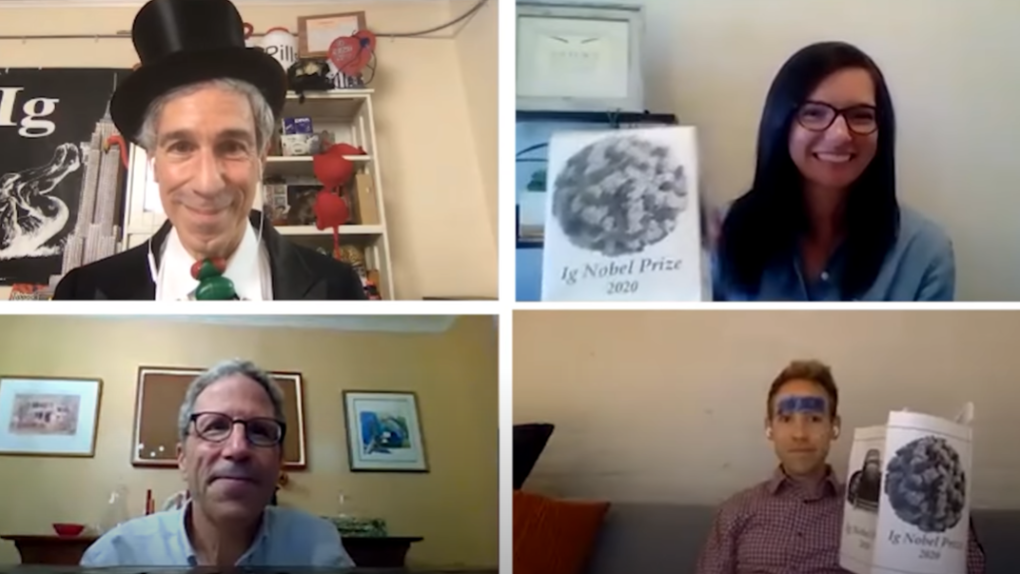 TORONTO -- A Canadian researcher and her American colleague have been awarded the satirical Ig Nobel Prize in psychology for devising a method to identify narcissists by their eyebrows.

The comedic awards show, which has been held every year since 1991, honours academic discoveries “that first make people laugh, then think,” according to the Annals of Improbable Research magazine, which organizes the awards.

“The prizes are intended to celebrate the unusual, honor the imaginative — and spur people’s interest in science, medicine, and technology,” a description of the event on the Improbable Research website reads.

The awards are usually handed out in person by “genuine (and genuinely bemused) Nobel Laureates” at Harvard University, but they were moved online this year as a result of the pandemic.

Giacomin, an assistant professor in psychology at MacEwan University in Edmonton, shared the prize with Rule, who was her professor at the University of Toronto, where she conducted the winning research as a postdoctoral student.

Their research examined if there is a particular facial feature on someone’s face that can help people identify them as a narcissist and thus, avoid the “negative interpersonal consequences often associated with narcissists.”

Participants were asked to rate photos of different faces in which certain facial features were obstructed to see if they could identify narcissistic individuals.

“We did a long series of experiments, basically showing participants pieces of the face, to try and figure out where the cue for narcissism lies – and that led us to our eyebrows,” Giacomin explained to CTVNews.ca during a telephone interview from Edmonton on Thursday.

The researchers discovered that pronounced eyebrows were more often associated with narcissistic personalities.

“We found that narcissism tended to predict having more distinctive eyebrows, which consisted of them being darker, bolder, standing out more on people’s faces,” she said.

Their research was published in the Journal of Personality in April 2019.

Giacomin said they found out they had won the Ig Nobel Prize in psychology earlier this summer.

“I was surprised,” she recalled of the moment. “It was exciting to find that out.”

During last week’s virtual ceremony, Nobel laureate Eric Maskin, who won the prize in economics in 2007, presented Giacomin and Rule with their award.

Their prize consisted of a PDF to print at home and assemble a cube trophy, a certificate, and a fake Zimbabwean $10-trillion bill.

While the award certainly elicited a few laughs, Giacomin said the real prize has been all of the attention their research has received since they won.

“I guess that is the award, right? More attention is placed on peer-research findings,” she said.