'Your call I will always remember,' Nixon tells Trudeau in Watergate chat

The brief conversation, captured on Nixon’s infamous tape-recording system in the White House, was released Wednesday along with dozens of others recorded between April and July 1973.

Trudeau made the call to Nixon on May 11, 1973, telling the president he’d just returned from a vacation.

“I wanted to phone you to tell you how distressed I was about all of this noise that is going on around the Watergate thing,” Trudeau begins.

“As far as I’m concerned, the people here that I know, and certainly myself, have great confidence and respect, and amongst politicians we realize how an issue like this can be seized upon and distorted,” he says.

“How kind of you to call,” Nixon replies, adding: “Let me say that it’s really a deplorable incident.

“As you know in campaigns, people, your best friends, with the best of intentions do things they shouldn’t and then you have to let them go. And it breaks your heart, but that’s the way it happens,” Nixon says.

At the time, a number of  high-ranking White House officials were implicated in the Watergate affair and Nixon had asked two of them to resign.

“I’ll tell you – we’ll survive it Mr. Prime Minister,” Nixon says to Trudeau. “But your call I will always remember.”

Trudeau then says: “I certainly never forgot that you called me when I was…” but he trails off and both men laugh. It’s unclear what Trudeau was referring to.

The president also tells Trudeau: “We sort of have a union – we politicians got to stick together.”

The newly released conversation between him and Trudeau struck a very different tone from an Oval Office chat recorded two years earlier that prompted Nixon to later call the Canadian prime minister “an asshole” and a “pompous egghead.”

A recording made in December 1971 and released in 2008 revealed a tense two-hour conversation about trade issues and economics between the two leaders.

In separate recordings, Nixon can be heard telling his treasury secretary and chief of staff that Trudeau is a “son of a bitch.”

When Trudeau later found out that Nixon had called him an "asshole,” he said: "I've been called worse things by better people."

About 140,000 pages of documents were also released Wednesday, including recently declassified intelligence analyses of the Vietnam War. 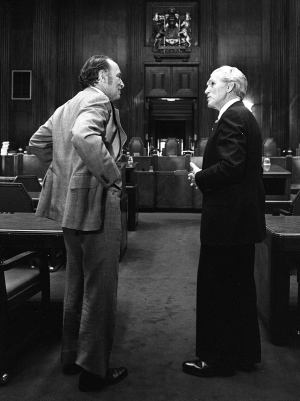 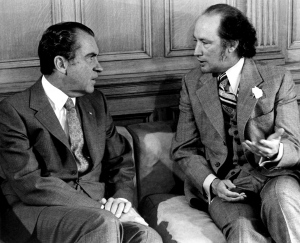