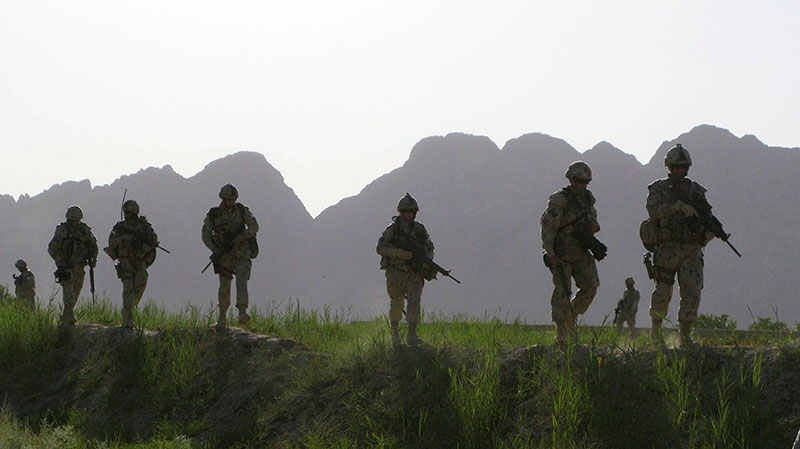 Soldiers patrol an area in the Dand district of southern Afghanistan on Sunday, June 7, 2009. (Colin Perkel / THE CANADIAN PRESS)

OTTAWA -- The Trudeau Liberals are going into the second half of their mandate facing anger from many disabled veterans over what some are calling a betrayal: the government's new pension plan for those injured while in uniform.

The National Council of Veteran Associations, which represents more than 60 veteran groups, has become the latest to come out against the pension plan, which Veterans Affairs Minister Seamus O'Regan unveiled before Christmas.

The new scheme was intended to fulfil the Liberals' campaign promise to reinstate lifelong pensions for disabled veterans, which were replaced in 2006 with a lump-sum payment and other targeted financial assistance.

But while the government says its plan will provide disabled veterans with more compensation, the council said its analysis had found most injured ex-soldiers would not see any real benefit.

That means the financial disparity between veterans injured before and after 2006 -- the source of much anger for many veterans -- will continue to persist, said council chairman Brian Forbes.

"I can't find too many illustrations of anyone who comes close to what they would have received under the Pension Act, even with these new enhancements," said Forbes, who is also executive director of The War Amps Canada.

"So if you were injured in 2003 in Afghanistan as opposed to being injured in 2007 with the same disability, you have significantly different financial benefits. How is that acceptable? Same war, same conflict, different benefits."

Many veterans voted for the Liberals in the last election expecting that disparity to be addressed, either through reinstatement of the previous pension system or dramatically increased benefits, including to those who are moderately injured.

O'Regan acknowledged when he rolled out the pension plan Dec. 20 that it would not please everyone, and veterans have not shied away from expressing their anger and disappointment on social media.

But the fact one of Canada's largest veterans' organizations has come out against the scheme is noteworthy, particularly as federal political parties begin making plans for the 2019 federal election.

A spokesman for O'Regan defended the new plan on Monday, saying it would provide more money to all disabled veterans, and asserting that the old pensions did not provide enough support.

"With the exception of the most seriously disabled, the rates were insufficient to support veterans who were struggling to re-establish into their post-service life," Alex Wellstead said in an email.

"Additionally, the Pension Act did not offer rehabilitation, education or transitional support. Under that system, veterans faced challenges successfully transitioning to life after service."

The Liberals were the only party to promise to reinstate lifelong pensions for disabled veterans during the election.

That promise raised expectations during the campaign, said Forbes, leaving many veterans who voted Liberal to feel "betrayed" by the new plan because it doesn't measure up to the commitment.

"Mr. Trudeau knew exactly what he was doing. He knew this was a sore point, that the Conservative party had let the veterans' side down and he was going to basically create a solution," he said.

"It's fair to say the disappointment (with the new plan) has been immense because it just didn't do the trick."

The new pension plan won't come into effect until April 2019, and Forbes urged the government to use the intervening time to adopt the recommendations made by a ministerial advisory group in October 2016.

Those include relaxing the criteria that injured veterans must meet to access some financial assistance and including more money for those with families and needing help at home.

If not, he warned, the Liberals could face consequences at the ballot box.

"As a political matter, it's hard to imagine the prime minister and his party wanting to go into the next election without satisfying the expectation here," Forbes said.

"If you're going to make a promise to provide lifetime pensions, then do it."