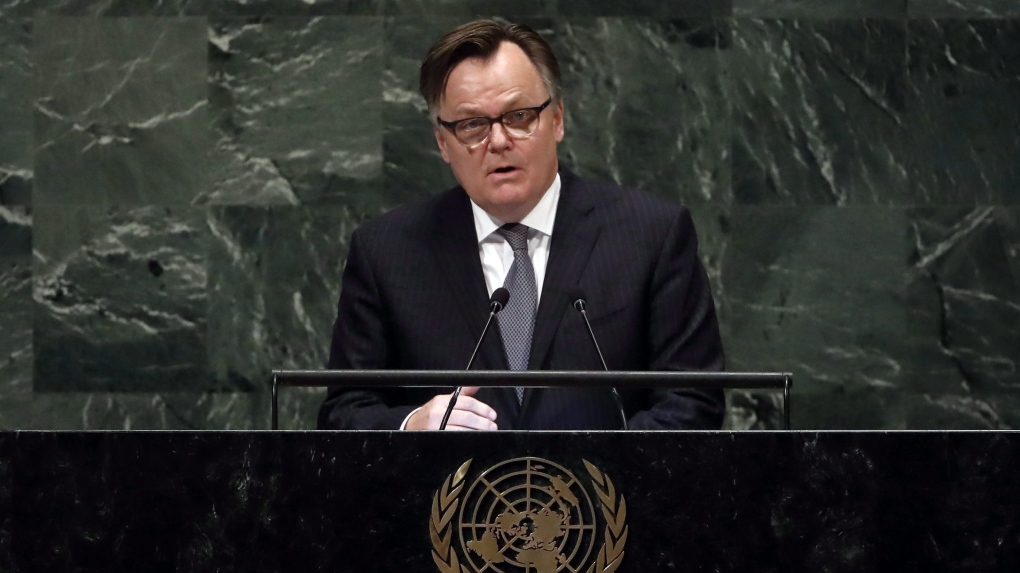 OTTAWA -- The United Nations has confirmed that the election for non-permanent seats on the Security Council -- which pits Canada against Norway and Ireland -- will take place in June under unprecedented new rules to prevent the spread of COVID-19.

The 193 ambassadors will cast their votes on behalf of their countries in a secret ballot with the three candidates vying for two available temporary seats on the UN's most powerful body.

But the vote won't take place during a full meeting of the General Assembly because New York has become the epicentre of the COVID-19 outbreak and that has forced UN diplomats to work from home and rely on videoconferencing.

Instead, the ambassadors will be notified in advance to come to a designated venue at UN headquarters -- a staggered, solitary procession that will see the world's leading diplomats presenting their UN security passes and then being given paper ballots.

The ambassadors will be assigned different time slots to come to the UN to cast their ballots to avoid a mass gathering during the pandemic.

The details were released in a memo that has been under consideration by the UN ambassadors for more than a week, and that carried a Friday-night deadline to reach a consensus.

"Enabling the (General Assembly) to carry out its essential duties is one of my top priorities during this challenging time," Tijjani Muhammad-Bande, the Nigerian diplomat currently serving as the president of the General Assembly, said in a tweet on Friday night.

Marc-Andre Blanchard, Canada's ambassador to the UN, said the country is ready for a June vote if it can be done in a safe way and carried out with respect for UN voting rules.

"This is uncharted territory. This has never been done," Blanchard said in a recent interview.

"We need to make sure the institutions are actually adapted to this reality," he added.

"This is not a military war we are facing. It's a health-care crisis and the biggest economic and financial crisis that we have seen since 1929."

The vote was originally set for June 17. The new rules do not specify exactly when the ballot will occur, other than sometime in the month.

Two of the competing countries will need at least 128 votes each, or two-thirds support of the assembly, to win a two year-term that would begin next year. That could mean multiple rounds of voting.

Blanchard said he expected the race to be hotly contested in the "Western European and Others Group," the most competitive of the UN's geographic blocs, where Canada faces formidable opponents.

Prime Minister Justin Trudeau has been courting the support of large voting blocs in Africa, Asia and the Caribbean because European countries are expected to rally around Norway and Ireland. This past week, Trudeau co-hosted a major UN meeting on rebuilding the global economy after the pandemic.

Canada is running on a platform of trying to help rebuild the post-pandemic world. In a joint press video press conference with Trudeau, UN Secretary-General Antonio Guterres tacitly endorsed Canada's ability to convene larger groups of countries to serve the greater international good -- a key plank in Canada's platform for the council.

Blanchard wouldn't say how much support Canada has been able to garner, but the secret balloting process in the UN has been notorious for deception that has seen countries promise support but take it away when an ambassador casts his or her secret vote.

Blanchard said Canada's campaign for the council rests on what it has been doing to help fight the pandemic. That includes convening like-minded countries to ensure food security in developing countries, keeping vital supply chains open across the globe, and working on new financing models to help struggling countries whose economies have been devastated by the pandemic.

"In other parts of the world, one of the biggest threats is access to food at this time of pandemic when the supply chain is disrupted, where there's no transportation," said Blanchard.

Canada hopes to bridge the differences on the security council -- where permanent members Russia and China have been at odds with the U.S., Britain and France -- by proposing they all work together towards a common good: the need to elevate economic conditions in all countries after the pandemic.

Canada lost its last bid for a security council seat in 2010 when tiny Portugal won more support. Canada had previously served six stints on the council, one each in the six previous decades.

This report by The Canadian Press was first published May 30, 2020.