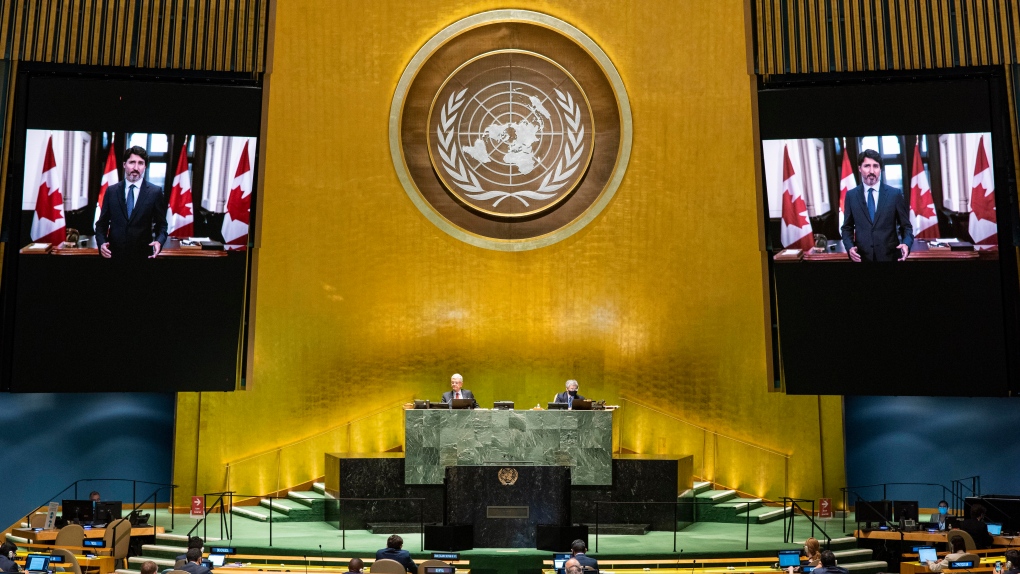 In this photo provided by the United Nations, Justin Trudeau, Prime Minister of Canada, speaks in a pre-recorded message which was played during the 75th session of the United Nations General Assembly, Friday, Sept. 25, 2020, at the UN. headquarters. (Rick Bajornas/UN Photo via AP)

OTTAWA -- Prime Minister Justin Trudeau is calling on countries with the largest land mass to do more to protect the biodiversity of their land and water.

Trudeau made that call today at a special session of the United Nations via video conference on the sidelines of the virtual General Assembly meeting.

Trudeau was taking part in the Leaders Event for Nature and People that also featured the leaders of Costa Rica and Norway.

The prime minister was pledging Canada's support for a UN initiative that aims to protect 30 per cent of land and oceans by 2030.

But Canada is the only country in the top-10 largest countries by land mass that has joined the initiative, Trudeau said.

“Every country will find it difficult to protect 30 per cent of their land and protect biodiversity. So, it's not about who is doing better,” the prime minister said.

“In terms of sheer acreage of the world, we need to get those other nine largest countries in the top 10 to do their part and step up as well.”

Canada will be working with Indigenous Peoples as necessary partners because they “understand how important it is to be good stewards of these lands and these waters that sustain us,” Trudeau said.

“Respecting this leadership will also advance reconciliation and build a more equitable and sustainable future. Much of the recent progress in conserving lands - including forests and wetlands that store massive amounts of carbon - has come from Indigenous Nations,” said Frank Brown, a member of the Heiltsuk Nation and senior leader with the Indigenous Leadership Initiative, in a statement.

“Now, by placing Indigenous-led conservation at the heart of its approach to protecting both nature and climate, Canada can lead the world in promoting a new model of ethical conservation - one rooted in respect, responsibility, and reconciliation.”

Trudeau also said the government will move forward with its plans to plant two billion trees, ban many single-use plastics and protect wetlands, saying he wants “Canadians once again to connect to their nature.”

The initiative is known as the “high ambition coalition,” and it was started late last year by Costa Rica and France.

The government said in a statement that Canada is “uniquely positioned” to take part because it has the second-largest land mass in the word, one-fifth of the world's fresh water, and the longest coastline in the world. Taken together, Canada's natural features play a critical role in fighting climate change, it said.

“Our forests, grasslands, and peatlands absorb enormous amounts of carbon pollution and are our best ally in protecting our climate,” the statement said.

Environment Minister Jonathan Wilkinson said in a statement that expanding protected areas is “critical not just for stopping the loss of nature and biodiversity but also to fighting climate change and helping prevent future pandemics.”