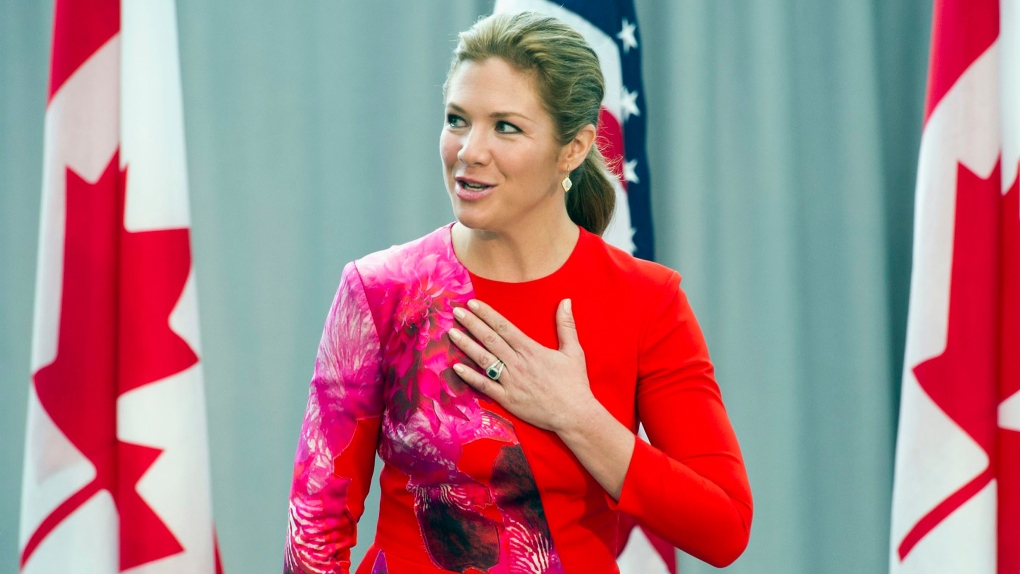 Sophie Grégoire-Trudeau, wife of Canadian Prime Minister Justin Trudeau, places her hand over her heart while participating in a program at the U.S. Institute of Peace in Washington, Thursday, March 10, 2016, to highlight Let Girls Learn efforts and raise awareness for global girl's education. (AP Photo/Cliff Owen)

The announcement Wednesday came at a high-level reception during the United Nations’ 61st Commission on the Status of Women. Grégoire Trudeau was one of five new campaign influencers named at the event.

Grégoire Trudeau’s role will be to discuss Women Deliver’s position that women can be drivers of progress and need to be at the centre of development, during her regular speaking engagements. The position is not expected require additional international travel.

“Our societies have taken profound steps towards a more gender equal world, but at current rates, gender equality might not be achieved in our lifetimes,” she said in a media release. “We must all work as one, including having men being part of the solution.”

Prime Minister Justin Trudeau has sent a large delegation – including federal and provincial cabinet ministers, parliamentarians and non-governmental organizations – to New York to take part in the UN Commission on the Status of Women this week to promote Canada’s plans and programs.

Those include a $650 million commitment over three years for international sexual and reproductive health projects.

Phumzile Mlambo-Ngcuka, the UN Under-Secretary-General and Executive Director of UN Women, who will join Grégoire Trudeau in her work with Deliver for Good campaign, spoke highly of the prime minister during her visit to Ottawa last week.

Mlambo-Ngcuka said the UN is “celebrating the shift in alignment” of Canada's agenda to match that of the rest of the world, noting Trudeau is saying things "you don't normally hear from leaders and from heads of state."

When Trudeau “says I'm a feminist, that lights the fire,” she said in an interview with CTV News.

Women Deliver president and CEO Katja Iversen was also in Ottawa last week for International Women’s Day. She participated in the panel Wednesday morning with Trudeau and International Development Minister Marie-Claude Bibeau following the announcement of $650 million for contraceptives and abortion funding.

Iversen warns the need to bolster women’s rights has become more pressing in light of a “growing wave of conservatism (that) threatens the precious gains the world has made to ensuring all girls and women can enjoy health, rights and wellbeing.”

Grégoire Trudeau echoed her message, saying “By denying women and girls their fundamental rights, we are preventing societies from reaching their full potential.”