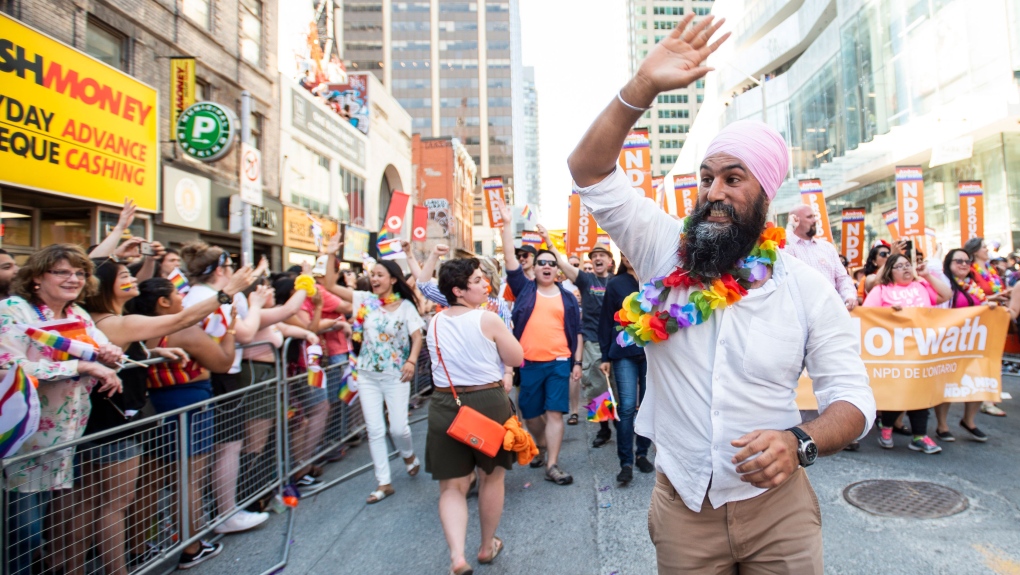 If the fall election results in a minority government and NDP Leader Jagmeet Singh holds the balance of power, he says he would not support the Conservative Party's agenda.

Singh's comments came in response to a video of Conservative Leader Andrew Scheer from 2005. In the video, Scheer is seen delivering a speech in the House of Commons detailing the reasons for his opposition to same-sex marriage.

Liberals had been circulating the video on social media all day Thursday. Scheer says his position has changed since the 2005 vote that legalized same-sex marriage, and he now "unequivocally supports equal LGBTQ rights, including same-sex marriage as defined in law."

Still, Singh said the video was a "resurfacing of Andrew Scheer’s disgusting prejudice against LGBTQI2S+ people."

"This is exactly why, if Canadians deliver a minority government in October, I will not prop up Andrew Scheer and the Conservatives. We can't trust Mr. Scheer or his caucus to champion the fundamental rights of Canadians," Singh said in an emailed statement.

The Liberals and the Conservatives have been neck and neck in recent polls, which creates the possibility that Singh could end up holding the cards in a minority parliament. That means when the Conservatives vote one way and the Liberals vote another on a given issue – but neither has enough votes to win – the NDP votes could make or break either party's goals.

The Green Party has also been nipping at the NDP's heels in polls, meaning they could muscle in and be deciders in a minority situation.

Singh has now unequivocally shared that, should his party be the one holding the balance of power, he would not support the Conservatives.

Scheer has defended himself against the criticism for his video. His press secretary Daniel Schow called the resurfacing of the video a "desperation tactic from Justin Trudeau."

"When this vote took place a decade and a half ago, Mr. Scheer voted the way several Liberals did, including some who currently sit in the Liberal caucus and are running for re-election. Mr. Scheer supports same-sex marriage as defined in law and as Prime Minister will of course uphold it," Schow said in an email sent to CTV News.