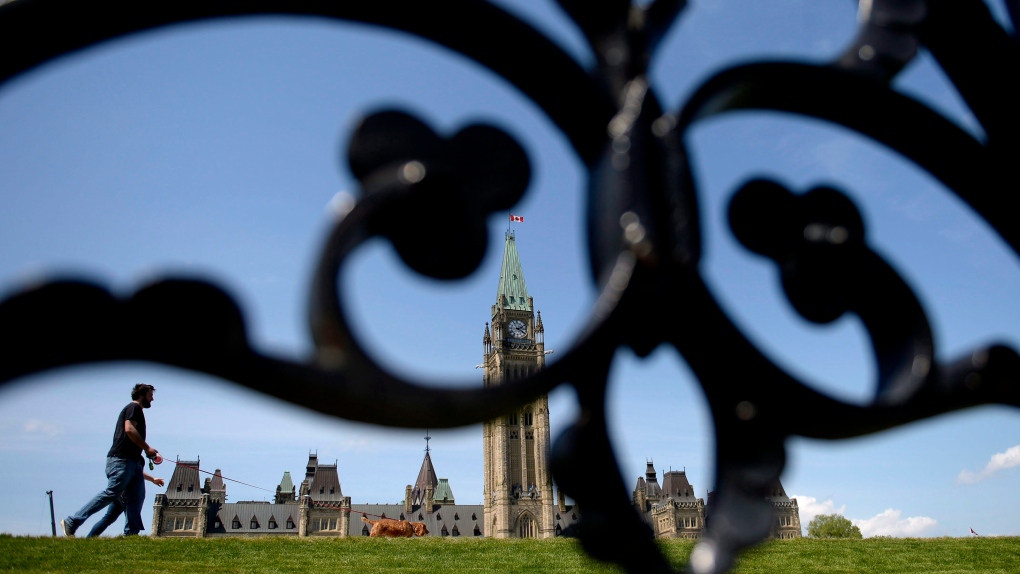 People walk on Parliament Hill in Ottawa on Tuesday, May 23, 2017. THE CANADIAN PRESS/Justin Tang

The Liberal government says it would violate privacy law to reveal the salary details of top aides to Prime Minister Justin Trudeau who are earning at least $150,000 annually.

A spokesman for the Privy Council Office said Wednesday evening that fewer than 10 PMO staff earn more than 150,000 but refused to name them or even provide an exact number.

“We are unable to provide additional information due to privacy considerations,” said PCO spokesman Paul Duchesne.

CTV News obtained a list of exempt staff working in the Trudeau’s office and their salary ranges, in a heavily-redacted document that excludes all the names and also blanks out the salary ranges for those in the $150,000 to $350,000 ranges.

The PMO said its salaries are on par with those in the public service.

“Salaries for exempt staff in the Prime Minister’s Office are in line with the Privy Council Office and senior civil servants,” PMO press secretary Cameron Ahmad said in an email.

The salary ranges for Trudeau’s top aides -- Chief of Staff Katie Telford and Principal Secretary Gerald Butts -- are not provided.

The lack of disclosure from the country’s top elected office contrasts with other jurisdictions, where salary information about senior officials is automatically disclosed.

In Ontario, for example, Andrew Bevan, who is chief of staff and principal advisor to Premier Kathleen Wynne, was paid $312,582 in 2016, according to the province’s Public Sector Salary Disclosure data -- also known as the “Sunshine List.”

Ahmad says the PMO salaries are equivalent to those in provincial premiers’ offices.

“When determining staff salaries, we looked at past PMO budgets and those of other first Ministers’ office -- and salaries in our office are commensurate with those,” he said.

The Privy Council Office, the prime minister's department, cited the privacy exemption in the Access to Information Act when it redacted the salary information.

Cabinet ministers must pay their so-called “exempt staff” within certain salary ranges set by the Treasury Board Secretariat or request a permission from Treasury Board President Scott Brison to vary the salary.

But the Prime Minister’s Office isn’t bound by the same requirement and can set the salaries for staff at whatever level it chooses.

Butts, a close friend of Trudeau’s since their days at McGill University, was paid $184,748 in 2008, his final year as an advisor to then-Ontario premier Dalton McGuinty, according to the provincial sunshine list.

Butts later worked as executive director of the World Wildlife Fund Canada and was paid the equivalent of US$233,472 in his last year before leaving to work with Trudeau, according to the organization's regulatory filings with the U.S. Internal Revenue Service.

Telford worked at Queen’s Park and later as a lobbyist before she joined Trudeau’s leadership campaign in 2012.

They were both the subject of a minor uproar in 2016 over moving expenses they charged to the federal government when they relocated to Ottawa after Trudeau’s Liberals won power. They both later agreed to partially repay their relocation costs.

The document released to CTV through the Access to Information Act appeared to show 13 blanked-out names of staff earning somewhere between $150,000 and $350,000 annually.

But the Privy Council Office said fewer staff fell in that category than it appeared because of the formatting of the document beneath the redacted section.