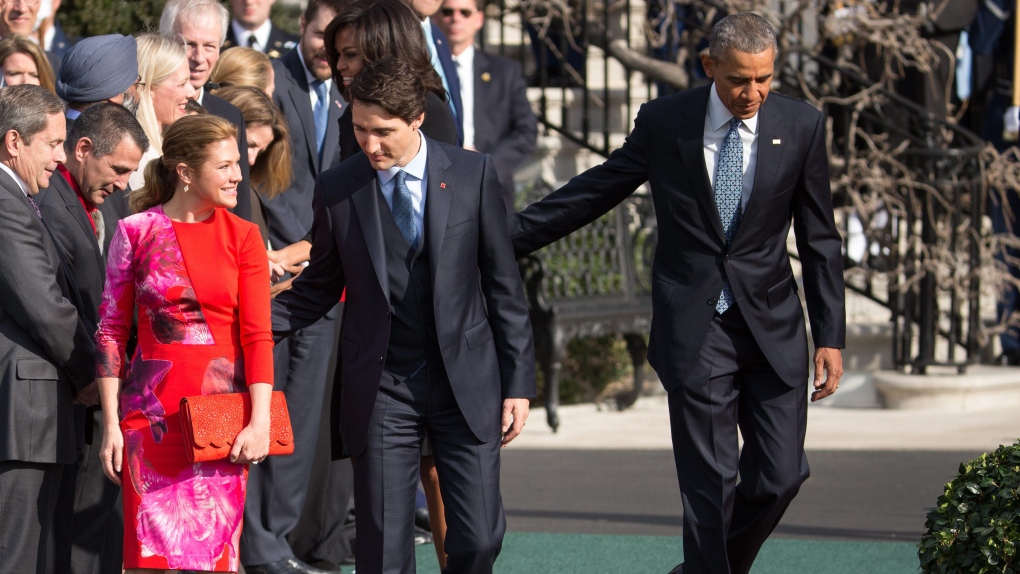 A question tabled in the House by New Democrat MP Pierre-Luc Dusseault resulted in a list of costs for the 43-person official delegation, plus another 24 officials listed as "other participants and eight more who went to D.C. but aren't included on either list.

The documents do not include costs for the RCMP detail who accompanies Trudeau and his family everywhere.

The official delegation list includes a number of Trudeau's staffers, but excludes some ministers. Public Safety Minister Ralph Goodale and Innovation Minister Navdeep Bains aren't on either the official list or the "other participants" list. International Development Minister Marie-Claude Bibeau made it onto the list of "other participants”, as did Trudeau's director of research and advertising, Dan Arnold, and senior Quebec adviser, Mathieu Bouchard. Trudeau's digital creative lead, Dave Sommer, made it into the official delegation along with Trudeau's official photographer, Adam Scotti, director of communication Kate Purchase and media relations lead Andrée-Lynn Hallé. Two strategic communications officials from the Privy Council Office, the arm of the civil service that supports the work of PMO, were also in the official delegation.

One of the Trudeaus' childcare providers was also on the official delegation, though none of their children are listed. A spokesman for PMO said that is because there were no additional costs incurred for the children to be on the trip.

The official delegation included Trudeau, his wife Sophie Grégoire Trudeau, his principal secretary Gerry Butts, chief of staff Katie Telford, deputy chief of staff Jeremy Broadhurst and the prime minister's parliamentary secretary, Celina Caesar-Chavannes, as well as a number of foreign policy and defence advisers from both PMO and PCO. The executive assistant in the foreign policy office at PCO was also part of the official delegation.

Trudeau and Grégoire Trudeau, most of the ministers and their senior officials travelled on the government's Airbus at an estimated cost of $46,620, Sajjan said in his summary of costs for the visit. That's based on an operating cost of $11,100 an hour for 4.2 hours of travel.

Some officials, including Trudeau and Grégoire Trudeau, Butts and Telford, were provided accommodation by the U.S. government.

The written response to the order paper question, provided by Caesar-Chavannes as Trudeau's parliamentary secretary, notes this was the first official visit to the U.S. by a Canadian prime minister since 1997 and that the relationship with the U.S. is Canada's most important bilateral relationship.

The question tabled in the House asked for costs broken down by delegate. The response notes it is disclosing additional costs that could not be broken down by delegate, like administrative and courier costs, gifts and translation. There are other costs for which expenses have not yet been filed, including meal expenses for some officials.

The delegation "took important steps to revitalize the Canada-U.S. relationship" and engaged its American counterparts on files like climate change, energy, international security and border co-operation, Caesar-Chavannes said in the written response.

"In particular, we strengthened security measures at the border and improved the efficiency with which goods can cross back and forth between Canada and the United States."

The number of civil servants accompanying a delegation varies by size of delegation, destination and topics to be discussed. It can also vary depending on how many ministers share an itinerary as opposed to participating in separate events and meetings.

The size of the prime minister’s delegation, however, would be set by his office. In this case there were 16 listed on the PMO portion of the delegation, including Grégoire Trudeau and the family’s caregiver.

Asked in question period about the cost of the visit, Government House Leader Dominic LeBlanc stood to answer while Trudeau remained in his seat.

"The trip to Washington was a historic trip. A lot was accomplished in Washington on behalf of Canadians and we are proud of our prime minister and his team's visit to Washington," LeBlanc said.

"[Canadians] wanted us to do it right and they wanted us to bring forward a positive message and also to do good work while we were there," she said.

New Democrat MP Jenny Kwan said there’s a real question whether all of those staff should have been on the trip, but she's also concerned about having to probe the Liberals for the full cost.

"The disclosure initially actually only showed $25,000, and it took a lot of work to actually get this information to let the public know," she said. "That didn’t come from the government automatically."