PM disappointed, but will heed SCC on Senate reform

OTTAWA -- Stephen Harper threw in the towel on Senate reform Friday after the Supreme Court slammed the door on his hopes of a quick fix for the scandal-plagued upper house.

The prime minister sounded resigned to the status quo as he gave up on more than three decades of championing an elected Senate, washing his hands of what has repeatedly been a central plank in Conservative election platforms.

Harper said he had no option left after the high court concluded that no major change can be made to the much-maligned Senate without a constitutional amendment supported by most or all the provinces.

That's a politically risky and potentially divisive route that Harper has no intention of taking.

"We know that there is no consensus among the provinces on reform, no consensus on abolition and no desire of anyone to reopen the Constitution and have a bunch of constitutional negotiations," a defeated-sounding Harper told a business audience at an event in Kitchener-Waterloo, Ont.

In essence, he added, the court has said "we're essentially stuck with the status quo for the time being and that significant reform and abolition are off the table."

He said he's personally disappointed and predicted the "vast majority of Canadians" will be too. Nevertheless, Harper said his government "will respect that decision."

In fact, the court did not put the kibosh on all Senate reform. It responded to specific questions from the Harper government on specific proposals to impose term limits on senators and to create a "consultative election" process to choose nominees.

The eight justices unanimously advised that Harper's proposed reforms would require constitutional amendments approved by at least seven provincial legislatures representing 50 per cent of the population. The Harper government had hoped it could proceed alone with such reforms.

Harper has periodically threatened to abolish the Senate if his reform plans are stymied. But the court set an even higher bar for abolition: unanimous consent of all 10 provinces.

Some of Harper's ministers have in the past promoted the idea of a national referendum to put pressure on the provinces for abolition. But Harper showed no interest in that Friday and his democratic reform minister, Pierre Poilievre, later ruled it out.

"We have no plan whatsoever for a referendum. We have no plans to open the Constitution and our focus will continue to be on the economy," Poilievre said.

Since coming to power in 2006, Harper's government has introduced several different versions of bills aimed at imposing term limits and electing senators. But they've all been allowed to languish in the legislative line-up after meeting with strenuous provincial objections to Ottawa's attempts to go it alone.

Harper finally sought the top court's advice on the matter in February 2013.

Saskatchewan Premier Brad Wall, a champion of abolition who backed the government's efforts, was more blunt than Harper in his assessment.

"I think its over," Wall said.

The decision leaves Canada in some pretty strange company when it comes to democracy, he added.

"Thailand, Antigua, Bahamas, Barbados, Belize, Burkina Faso, Fiji, Grenada, Jamaica, Jordan, St. Lucia, Trinidad and Tobago, and the Dominion of Canada -- these are the countries that have a wholly appointed upper chamber with no prospects for change."

NDP Leader Tom Mulcair accused Harper of doing nothing to advance the cause of Senate reform. Now the prime minister is giving up even the pretence, content to continue appointing "his buddies" to the upper house, he added.

Mulcair, who's been crusading for Senate abolition in the midst of the expenses scandal that has rocked the chamber for more than a year, was undaunted by the prospect of needing unanimous provincial support.

"We're not going to raise the white flag on this," he said after a speech in Kingston, Ont.

"We're going to keep fighting to get rid of the unelected, unaccountable Senate. We know it's a tough job but, you know what? That's why you apply for these jobs."

But Liberal intergovernmental affairs critic Stephane Dion suggested Mulcair is dreaming if he thinks he could keep constitutional talks focused strictly on the Senate. Quebec Premier Philippe Couillard has promised to put Quebec's traditional constitutional demands -- distinct society status, among other things -- back on the table should negotiations be opened on the Senate.

"There's no way it will be only about the Senate," Dion said. "There is no appetite for that among Canadians. Nobody wants to reopen the Constitution, to have mega-negotiations about a lot of issues."

Dion said the court decision proves Liberal Leader Justin Trudeau is the only federal leader who has a realistic, practical plan for reforming the Senate.

Trudeau has kicked senators out of the Liberal caucus in a bid to return the Senate to its intended role as an independent, less partisan chamber of sober second thought. He's urged Harper to follow suit but, so far, the Conservatives have dismissed Trudeau's gesture as a meaningless stunt.

Should he become prime minister, Trudeau has also promised to create a blue-chip, non-partisan advisory group to recommend Senate nominees. 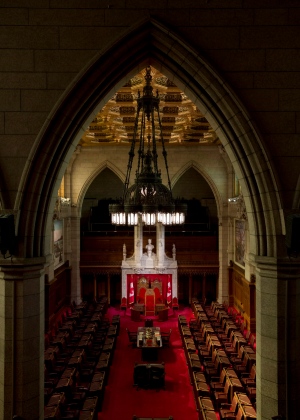