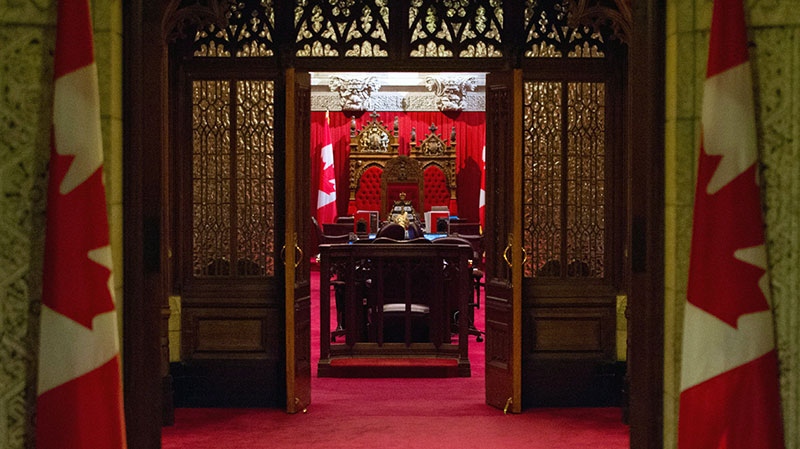 The Senate on Parliament Hill in Ottawa on Thursday, Oct. 24, 2013. (Sean Kilpatrick / THE CANADIAN PRESS)

OTTAWA -- The Conservative government prevented a senior Library and Archives Canada bureaucrat from speaking to the media last year at the height of the Senate spending scandal, newly released documents show.

The records offer a glimpse into just how gingerly officials treated the flow of even arcane technical information at a time when the government was in the throes of a political crisis and facing allegations of a coverup.

In December, The Canadian Press asked for a background briefing with an official from Library and Archives Canada about the rules and statutes that surround how government emails are archived and deleted.

Those rules had come in for media scrutiny after a police document suggested all of the emails belonging to Benjamin Perrin, formerly a lawyer in the Prime Minister's Office, had been deleted upon his resignation.

Perrin had been in the loop on the deal struck between Mike Duffy and Nigel Wright, Prime Minister Stephen Harper's former chief of staff, to cover the cost of reimbursing the disgraced senator's disallowed expense claims.

Both Wright and Duffy have been the subject of police allegations of fraud and bribery, and have denied the allegations. No charges have been laid.

Within a few hours of receiving the request from The Canadian Press on Dec. 4, bureaucrats inside Library and Archives Canada had identified an expert to provide a technical briefing on the rules the following day.

"Since you are a pro at doing interviews and understand the (Library and Archives) Act like no other ... well, let's just say yours was the first name to come up," one media relations officer wrote to the individual in question.

"Pending approval from (the Privy Council Office), (the director general) has given her OK that you be the one to have this informal chat."

But an email chain released under the Access to Information Act shows that officials from the Privy Council Office -- the central bureaucracy and serves the prime minister and cabinet -- and the Department of Canadian Heritage quickly put the kibosh on the briefing.

At least one other reporter, whose name was redacted for privacy reasons, was also seeking a briefing.

The request for approval went as high as the Privy Council Office, which directed Library and Archives to ask Heritage Minister Shelly Glover's office to approve the interview.

"Did this request get approval from the minister's office?" one senior analyst asked Library and Archives.

"This has been nixed by PCH and PCO. Instead we are dealing with the questions only," the media officer at Library and Archives revealed a day later.

The Canadian Press was eventually told that the only person who could give the briefing "was out of town."

It then took a village to answer a series of emailed questions that were subsequently submitted by The Canadian Press.

At least 32 civil servants at Library and Archives Canada, the Privy Council Office, the Treasury Board Secretariat and Canadian Heritage were copied on responses that were tossed back and forth. None of the questions pertained to the Perrin case specifically.

It's unclear how many political staff would have been involved, because they are not subject to the Access to Information Act.

An initial set of responses came more than a day later, most of them copies of answers already provided to other journalists.

But other answers took an additional six days or one full week after the initial request for a briefing. One such question about government records was "What is meant by archival or historical value?"

"Do we plan on replying or simply ignore their questions? The due dates were last week," wrote one media relations officer.

Mike Storeshaw, a spokesman for Glover, said her office did not play a role in cancelling the interview.

"In fact, no such request for approval of a background briefing was ever presented to our office," Storeshaw said. "Any decision around it would have been made outside of the office of the minister."

Deputy Liberal leader Ralph Goodale said the case is an example of Conservative "paranoia" around the Senate spending affair.

"The government obviously has been extremely skittish around the whole Wright-Duffy affair and they have been going to extraordinary lengths to control information, stifle information, trying to starve the issue of oxygen so hopefully from their point of view it goes away," said Goodale.

Under the Library and Archives of Canada Act, government records must be preserved based on the "administrative, legal, fiscal, evidential or historical" information they contain. Each government institution is in charge of making sure their employees comply with these rules.

The Privy Council Office eventually discovered that Perrin's emails had not been deleted, but were frozen after his departure because of a unrelated legal dispute.