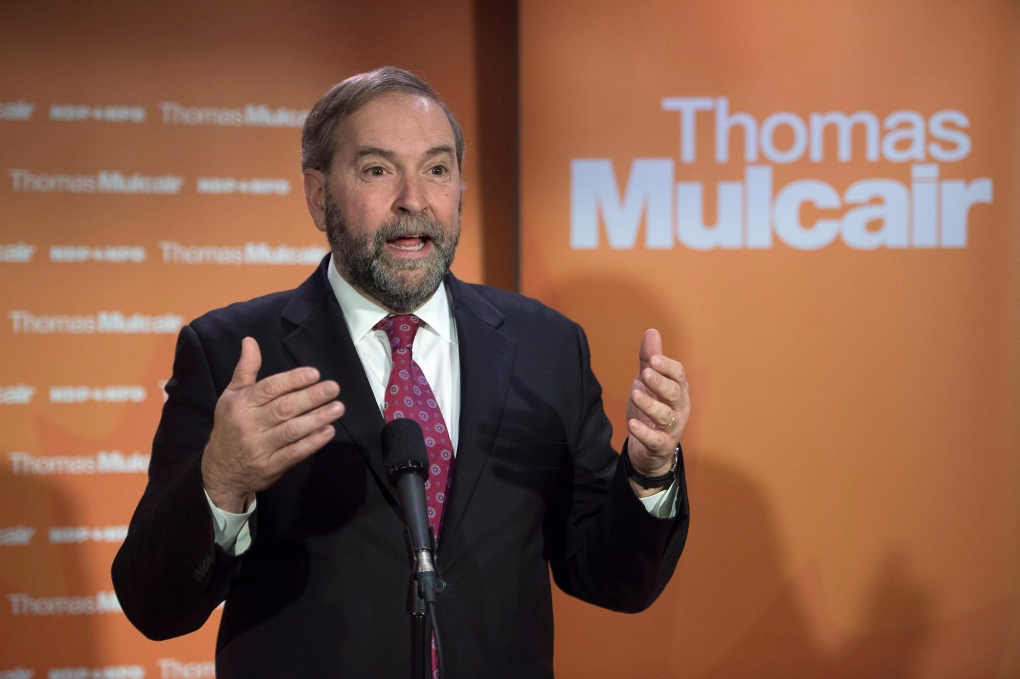 OTTAWA -- Tom Mulcair's enthusiasm for a west-to-east oil pipeline has not dimmed, despite mounting opposition among environmentalists and provincial politicians in the NDP's home base of Quebec.

Energy East still makes the most sense of any proposal for pumping Alberta's oilsands crude to tidewater, the NDP leader says.

But it has to be done right, Mulcair warns -- with a rigorous, transparent environmental review process and legislation to force oil companies to pay for the pollution they create, including any increase in greenhouse gas emissions.

He says opposition to Energy East has grown precisely because the Harper government has failed to do either.

Mulcair believes public opinion can be turned around if Canadians trust their government to protect the environment and address the legitimate concerns of First Nations and others through whose lands the pipeline would cut.

That, of course, is where he comes in.

"It's not that it's impossible to do. It's just that Stephen Harper doesn't know how to do it," Mulcair said in an interview with The Canadian Press.

Harper's Conservative government has turned the environmental assessment process into a sham and has gutted other legislation designed to protect fisheries and waterways, he said.

By contrast, Mulcair, a former Quebec environment minister, described himself as someone with "a proud track record of being a very rigorous enforcer of environmental legislation."

TransCanada's proposed Energy East pipeline would carry oilsands crude to refineries on the east coast for export overseas; it would require construction of two marine facilities, on the Gulf of St. Lawrence near Quebec City and in Saint John, N.B.

Concern about the pipeline has been growing, particularly in Quebec -- Mulcair's home base and the province that vaulted the NDP into official Opposition status for the first time in 2011. The party's hopes of forming government in next year's election rest largely on its ability to hang on to its 54 Quebec seats.

Earlier this fall, the Quebec Superior Court slapped an injunction on TransCanada Corp. to halt exploratory drilling at its planned oil export facility at Cacouna on the St. Lawrence River. The injunction had been sought by Quebec-based environmental groups concerned about the impact of the drilling on a beluga whale calving ground around Cacouna.

Last week, Quebec's National Assembly unanimously adopted a motion asking the provincial government to assert its jurisdiction over the environment and to hold its own hearings on the Energy East proposal, including the pipeline's potential impact on greenhouse gas emissions and climate change.

The motion was in response to the National Energy Board's refusal to consider the impact on climate change in its assessment of the project and the federal government's failure to regulate carbon emissions by the oil and gas sector.

Despite growing concern in Quebec, Mulcair said he still believes the proposed Energy East pipeline is preferable to three other proposals for getting Alberta's landlocked unrefined oil sands crude to tidewater: the Keystone XL pipeline to the U.S. Gulf Coast and the Northern Gateway and Kinder Morgan pipelines to British Columbia's coast.

"As a basic proposition, of course, it makes sense, much more sense, for Canada to be taking that product from the west, moving it within our own country, refining it here because by refining, upgrading and adding value here, you're creating jobs in Canada," he said.

Mulcair is adamantly opposed to Keystone and Northern Gateway. He's withheld judgment on the Kinder Morgan proposal but said the NEB's hearings on it have been such a sham, refusing to allow cross-examination of the company's representatives, that it is "doomed to failure."

No pipeline will get built without getting "social license" from First Nations and other Canadians, he said.

"Mr. Harper has been talking about pipelines for nine years and he hasn't gotten a single one accomplished," Mulcair noted.

"You have to get these things right. There's no reason not to have the public on side. With a full, transparent, credible process you could find solutions but, unfortunately as usual, the Conservatives are intent on ramming this matter down our throats and not listening to the public."

As Quebec environment minister, Mulcair said he once defied environmentalists who were opposed to construction of a new bridge from Montreal to Laval. Stern environmental conditions were laid down and ultimately, people accepted the bridge.

"I had a good reputation. We had a thorough environmental assessment process ... The public trusted me."

Mulcair expressed sympathy with the Quebec government, which he said has been forced to do the credible environmental assessment job that the federal government refuses to do.

Environmental groups, such as the Pembina Institute, are opposed to Energy East on the basis that it would encourage expansion of the oilsands, thereby exponentially increasing greenhouse gas emissions.

But Mulcair said those concerns would be addressed if oil companies had to pay for to clean up their pollution, including carbon emissions. That would "attenuate" oilsands development, he said.

Pembina's oilsands analyst, Erin Flanagan, said it's reasonable to call for a thorough environmental assessment and regulations to curb the impact of oil sands development. But she said that's not a solution for the Energy East proposal, since hearings have already begun that don't address either concern.

"The horse is already out of the barn," she said. "The review is under way and the probability of securing those things in advance of a decision on this pipeline is very low."

Pembina is calling for the National Energy Board Act to be amended to ensure the NEB's hearings include the full scope of environmental impacts.