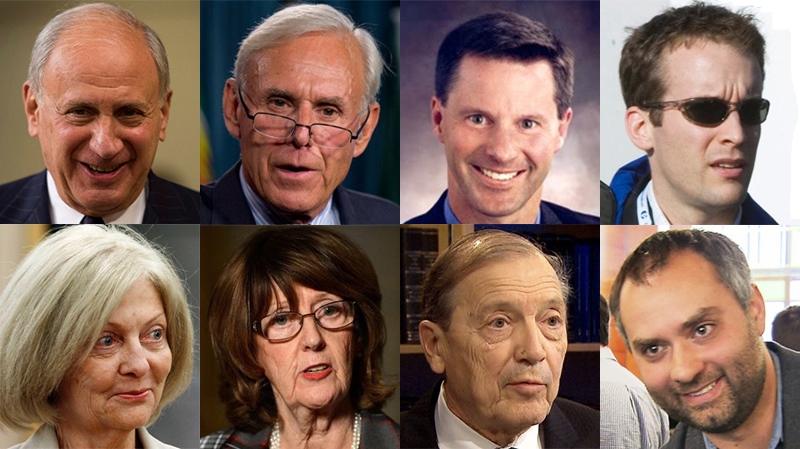 With the much-anticipated trial for Mike Duffy underway, all eyes will be on the former Conservative Party star himself.

But the court is also expected to hear from many important figures in the Senate scandal, including some of Prime Minister Stephen Harper’s closest aides and confidants, as well as senators who wielded a lot of power in the Upper Chamber.

Duffy faces 31 charges, including breach of trust, fraud and bribery, in relation to his living and travel expenses. He has repeatedly denied any wrongdoing.

To help remind you of the key figures in this complex story, we’ve rounded up a list of noteworthy names, from the lawyers on both sides to those who may end up on the witness stand. None of the claims or allegations by the RCMP have yet been proven in court.

Duffy hired the well-known criminal lawyer to represent him when the Senate scandal broke in 2013. Bayne is a partner in the Ottawa law firm Bayne Sellar Boxall and has practised criminal law for 36 years. According to the firm’s website, Bayne has taken on all sorts of complex cases over the years, including cases involving murder and war crimes.

These two Crown attorneys have been assigned to prosecute Duffy. In the first few days of the trial, they are expected to focus on Senate rules and regulations.

In 2013, the prime minister's then-chief of staff, Nigel Wright, secretly wrote Duffy a personal cheque for $90,000 to cover the senator’s disputed expense claims. Duffy publicly declared that he had repaid the money himself, but CTV News uncovered details of the Wright-Duffy deal. After the explosive revelation, Wright left the PMO and later returned to the private equity group Onex in the U.K., where he had worked before becoming Harper’s right-hand man. Wright has not been charged by the RCMP in connection with the cheque.

Novak was a senior PMO staffer before he was appointed Harper’s chief of staff in May 2013, in the wake of Nigel Wright’s resignation.
When Duffy defended himself before the Senate, he alleged that Novak called him at home at one point to discuss the growing expenses scandal, with Sen. Marjory LeBreton also on the phone.

Perrin is a former PMO lawyer who allegedly helped broker Wright’s cheque to Duffy. According to a sworn RCMP affidavit, an email trail suggests Perrin and Conservative Party lawyer Arthur Hamilton were involved in those discussions. Perrin is now a professor at the University of British Columbia’s Faculty of Law.

LeBreton, who was the government leader in the Senate when Duffy’s troubles began, allegedly communicated with Duffy and the PMO about the results of a damning Deloitte audit that examined the senator’s living expenses. Some of that correspondence, via emails attributed to Wright, was included in the RCMP affidavits filed in court.

According to the RCMP, Tkachuk also participated in conversations about the audit of Duffy’s expenses and how the Senate should handle it. At the time, Tkachuk was the chair of the Internal Economy Committee, which oversaw the auditing process that ultimately led to the suspensions of Duffy, Patrick Brazeau and Pamela Wallin from the Senate. CTV News has reported that Tkachuk helped tone down the wording in the final version of the Duffy audit.

Stewart Olsen was another key figure on the Senate’s powerful Internal Economy Committee. She also faced allegations in an RCMP court document of trying unsuccessfully to quash Duffy’s expense audit in exchange for Duffy repaying his bill. When asked if she helped sanitize the auditors’ notes, she told CTV News: “I object to the word ‘sanitized.’ I moved the motion to adopt the report.” Also noteworthy: Stewart Olsen has been one of Prime Minister Stephen Harper’s most loyal advisers, dating back to his days in the Canadian Alliance Party. She served as his chief communications strategist until he appointed her to the Senate.

As the Conservative Party’s chief fundraiser, Gerstein allegedly agreed to use party funds to reimburse Duffy for paying back his disputed living expenses, according to RCMP documents.  Butthe documents allege he backed out of that agreement when he was told that Duffy owed more than $90,000. Gerstein has disputed that, telling an audience at a Conservative Party convention in 2013 that he had refused to help Duffy repay his disputed expenses. However, Gerstein admitted that the party fund spent about $13,000 to cover Duffy’s legal fees.

He's no senator or PMO adviser, but the former Sun News political commentator has said that he will be called to testify as a Crown witness. Levant told The Canadian Press that he wrote “a couple” of speeches for Duffy several years ago, but it’s not clear what kind of testimony he will be asked to give in court. Levant and Duffy, a former broadcaster himself, have appeared on each other’s shows over the years.