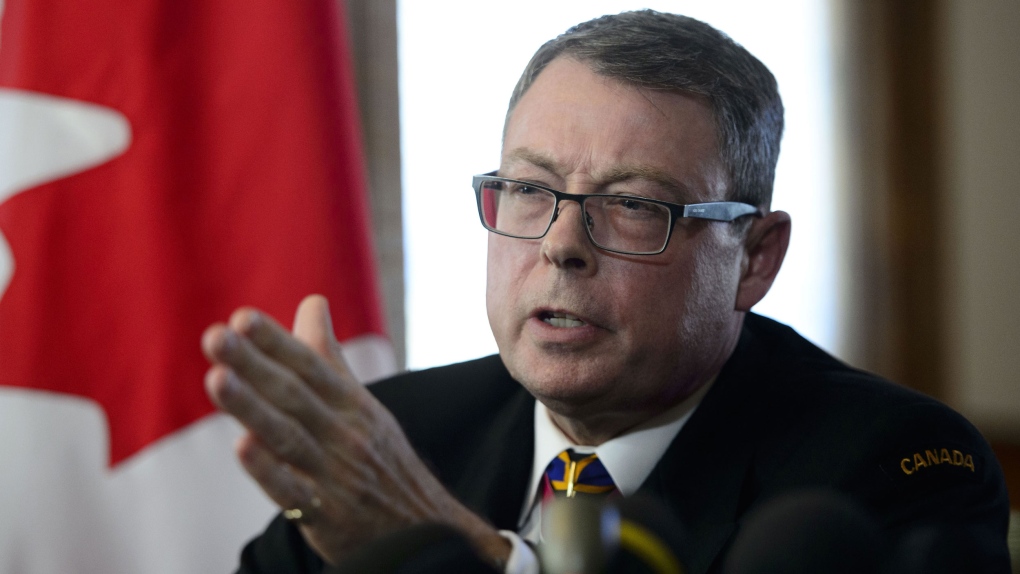 Vice Admiral Mark Norman reacts during a press conference in Ottawa on Wednesday, May 8, 2019. The charges against Norman were dropped. THE CANADIAN PRESS/Sean Kilpatrick

Speaking on Parliament Hill, Scheer said a full investigation is justified to examine how the military's former second-in-command came to be charged over alleged leaks of cabinet secrets about a shipbuilding contract.

The Opposition leader also said he has questions about Trudeau's role in launching the original leak investigation and whether the government behaved improperly in resisting the release of documents to Norman's lawyers.

"I call on Justin Trudeau to conduct a formal public inquiry into exactly how and why the RCMP were called in to investigate Vice-Admiral Mark Norman and to any other relevant issues surrounding this affair," Scheer said.

Norman faced one count of breach of trust, over an alleged attempt to undermine the federal cabinet's decision on buying a refitted supply ship for the navy from Quebec's Davie shipyard by slipping Davie confidential information.

The case collapsed last week after Crown prosecutors got new information from the defence that convinced them they stood no reasonable chance of landing a conviction -- evidence apparently related to direction Norman received from the previous Conservative government about dealings with Davie.

On Thursday, the Liberal majority on the House of Commons defence committee rejected an opposition effort to start a committee investigation into the Norman affair, accusing the Conservatives of ignoring the facts in a bid to tar the governing party five months before an election.

Despite statements from prosecutors that the prime minister didn't put political pressure on them -- Kathleen Roussel, the head of the federal prosecution service, sent an unusual statement to that effect after the case ended -- Scheer alleged Friday that Trudeau interfered.

"His fingerprints have been on this from Day 1," Scheer said, adding that Norman deserves a personal apology from the prime minister.

At an event for Royal Military College graduates in Kingston, Ont., Gen. Jonathan Vance told CTV News that Trudeau played no role in suspending Norman before he was charged.

"The prime minister did not pressure me to suspend him, OK?" said the chief of the defence staff, Norman's only superior in the Canadian Armed Forces. "My decision, my decision alone because of the Code of Service Discipline and the Queen's Regulations and Orders. Not the prime minister, not the minister, me. I own it."

The Tories will try to keep the issue alive when the House of Commons returns after a break week. On Friday, the party gave formal notice of a motion demanding the Prime Minister's Office release a 60-page memo on the case that Michael Wernick, the then-clerk of the Privy Council, sent Trudeau in October.