OTTAWA -- Manitoba Premier Brian Pallister acknowledged he made an error after he and Conservative Leader Andrew Scheer were photographed at the Toronto Pearson airport Tuesday and neither was wearing a mask -- a clear violation of the airport's COVID-19 safety rules.

"I lifted my mask to join some friends in conversation at the Toronto airport this afternoon. It was an error on my part, it won’t happen again," Pallister said.

Two different social media accounts shared separate photographs of the incident, which took place in the early afternoon on Tuesday.

Kelsie Chiasson, a spokesperson for Scheer, confirmed that he was at the airport -- though she claimed he only briefly removed his mask.

"Mr. Scheer wore a face mask while travelling to Ottawa today. He removed it to make a phone call. The pictures must have been taken before he put it back on," Chiasson said.

When asked to clarify why Scheer doesn’t appear to be on the phone in either photo, Chiasson repeated that the photos must have been taken before Scheer put the mask back on.

In a tweet sent out in direct response to the photos of the unmasked Conservative politicians, the official Toronto Pearson airport’s twitter account said that "all travellers and employees inside the terminal must wear a mask or face covering."

According to the airport's website, the rule has been in place since June 1. While it names four exceptions for the use of a face mask or covering, the use of a phone is not among them.

The two Twitter accounts that shared the photos expressed concern about the politicians' lack of mask use.

In a tweet sharing one of the photos, which was directed at Scheer and Pallister, user @canadiandollaz asked: "What are your thoughts on wearing masks indoors during a pandemic? What about wearing masks in cities where it is legally mandated? WHAT ABOUT in AIRPORTS?! What's wrong with you?" 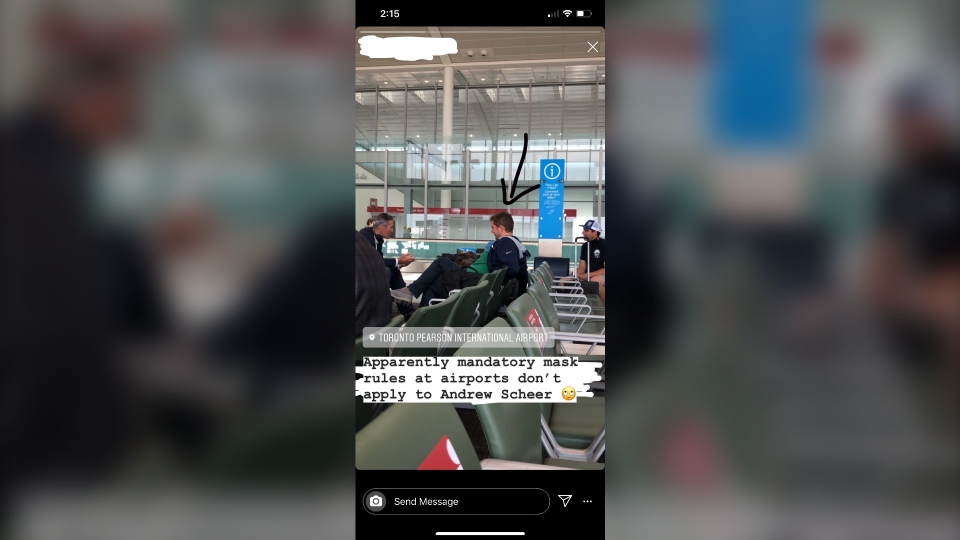 Another account, @loxyisme, shared a photo from a different angle of the same moment -- writing that a friend sent them the photo and noting that "everyone else" in the photo is wearing a mask, aside from Scheer, Pallister and two others accompanying them. 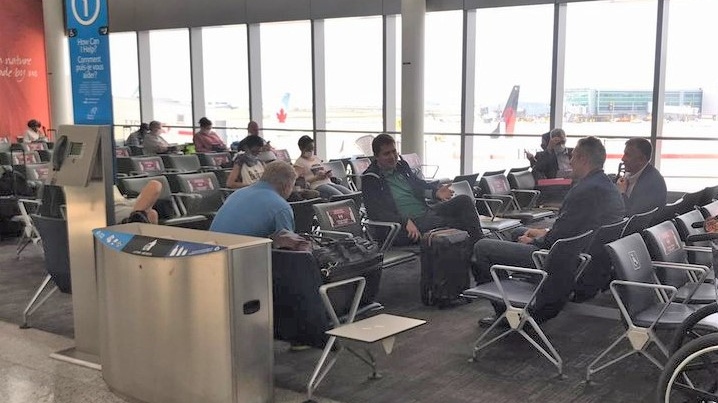 The use of some kind of face covering in publicly accessible indoor settings also became mandatory in the entire City of Toronto on Tuesday. While an airport would technically be exempt from the order, Pearson's own rules require mask-wearing in the terminal.