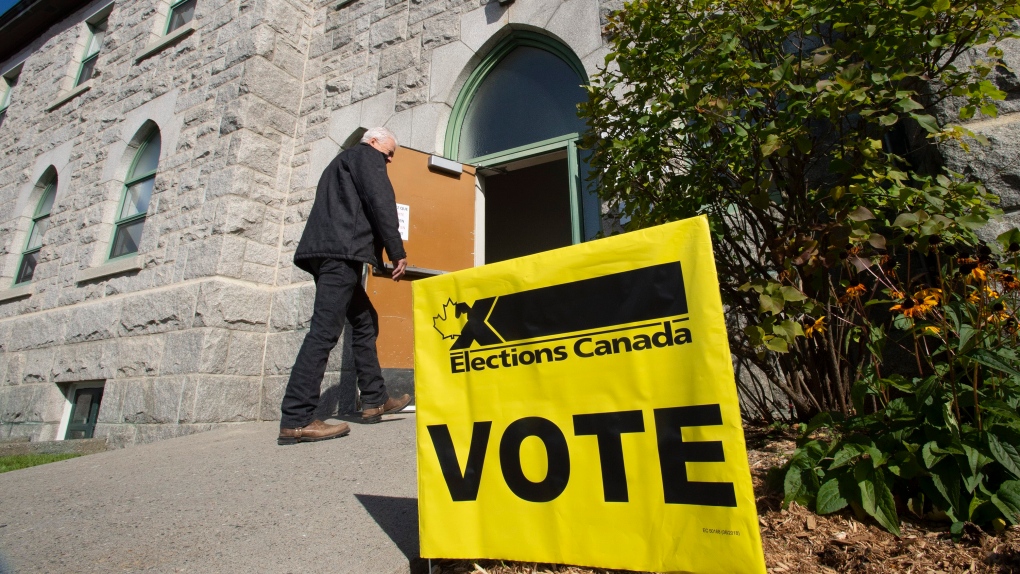 OTTAWA -- The federal government is proposing to allow Canadians go to the polls over a weekend, and wants to set up new mail-in ballot measures in anticipation of increased demand for them, should a snap general election get called while the COVID-19 pandemic is still surging.

These proposed changes are among several in a new piece of legislation called Bill C-19, bringing what the Liberals are considering “temporary” changes to the Canada Elections Act.

The amendments are targeted at mitigating challenges that could arise when administering a federal election during the COVID-19 pandemic, including the anticipation that up to five million electors would opt to vote by mail, a dramatic increase from the nearly 50,000 in the 2019 federal election.

Canadians would be able to cast their ballots in-person over a three-day polling period with eight hours of voting on a Saturday and Sunday, and the usual 12-hour voting window on the following Monday, to allow for physical distancing at polling places and avoid long lines of voters waiting to cast ballots.

The days for advance polling would be the Thursday, Friday, Saturday and Sunday the week prior, federal government officials told reporters during a background briefing on the suite of proposed amendments.

In addition to allowing weekend voting, the Liberals are looking for Parliament to agree to create a 13-day period prior to regular polling places being open to allow for votes to be cast in long-term care homes and other similar residences.

This would permit seniors and people with disabilities to have safe opportunities to cast their ballots and to stop poll workers from going into multiple facilities in a short period of time. In these facilities, election workers can establish polling stations with the usual vote safety procures in place, on specific floors of the homes to avoid hotspot or quarantine areas.

“Canadians deserve to have full confidence in their ability to exercise their democratic rights safely in these unprecedented times,” reads the statement from Minister Dominic LeBlanc, who is responsible for democratic institutions.

“This will ensure the health and safety of voters, election workers and all participants in Canada's electoral system. By introducing these temporary amendments, Elections Canada will be able to offer more ways for Canadians to vote during a pandemic. I look forward to working with my parliamentary colleagues to deliver our shared goal of a free, fair and safe election,” LeBlanc said.

The legislation also proposes a suite of new measures around mail-in ballots.

Bill C-19 would also grant new powers for the Chief Electoral Officer (CEO) to set rules around health and safety of electors and elections workers. This would allow for targeted rule changes to be flexible across the 338 ridings, should one region require a different approach due to the severity of the pandemic in the area at the time.

This would include exceptions for extending voting hours in certain ridings if a polling station was interrupted by an emergency.

The changes would only apply to an election called 90 days after the bill passes, and would cease to be in effect six months or earlier if the CEO decides, after a notice is given, that the measures are no longer necessary, based on consultations with the Chief Public Health Officer.

This means even on the fastest legislative timeline, it would likely be April or later before these proposed new pandemic provisions could be in place.

Parliamentary Secretary to the Leader of the Government in the House of Commons Kevin Lamoureux said the bill is a priority for the government, but didn’t say whether the legislation will be pushed through quickly.

“When we can get through, we'll get it through,” Lamoureux said.

RESPONDS TO CALLS FOR CHANGE

The legislation responds to a series of recommendations from Canada’s Chief Electoral Officer Stephane Perrault, made in a special report in October.

Elections Canada has said, while it would be able to run a general election during the global health crisis, the agency is anticipating an uptick in mail-in voting and the need for more advance polls, so it hoped to be given more flexibility for voters and those running the vote. Spokesperson Matthew McKenna told CTVNews.ca that the agency is currently studying the legislation, and the CEO intends to testify before MPs about the bill, in the new year.

The suggestions for weekend voting came from Elections Canada, though their pitch was for a two-day polling period over the weekend exclusively, instead of the usual Monday voting day, to have the ability to set up polling places in larger locations that may not be available on weekdays.

Officials said Thursday that the decision to keep Monday was to recognize that for Canadians who are religiously observant, have childcare needs, or require access to public transit, weekend voting may not be feasible.

The federal elections agency had also requested an increase to the number of voting days for electors in long-term care facilities, to prevent poll workers from having to enter multiple facilities in a day.

Elections Canada also wanted to see a provision in the law to allow mail-in ballots sent before the deadline to be accepted up until the day after polls close. The Liberals are suggesting that so long as someone has sent in their ballot before polling stations close on the final day of the polling period, and received by the special voting rules administrator in the National Capital Region no later than 6 p.m. on the Tuesday, it would be counted.

Officials said that they don’t anticipate a considerable delay in announcing the results of the election, despite these new extended voting windows and options, because Elections Canada is able to count advance votes as they come in.

As well, federal officials say they are not anticipating any specific risk of fraud, should there be a surge in mail-in ballots.

There are already interim changes being made that don’t require legislation, given the Liberal minority and the possibility for a snap election being called at any time, and likely prior to the next fixed election date in 2023. These include implementing physical distancing and other public health guidelines at polling places, procuring masks and single-use pencils to be provided to electors to fill out their ballots, and increasing the capacity of the existing vote-by-mail system.

MPs on the Procedure and House Affairs Committee have also been studying the feasibility of running an election during the pandemic, and are continuing to hear witnesses on the topic.