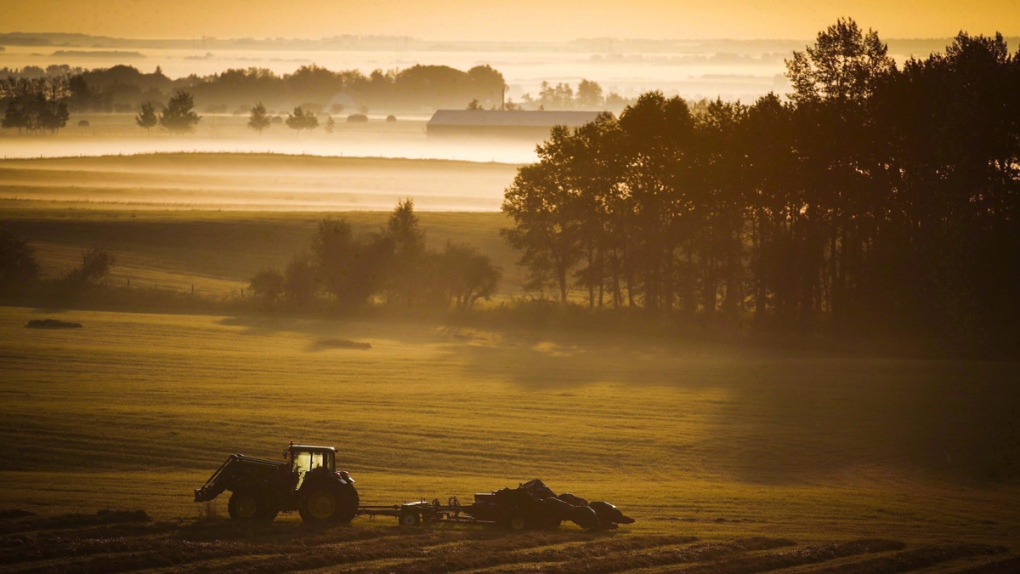 A farm tractor and baler sit in a hay field on a misty morning near Cremona, Alta., on Aug. 30, 2016. (Jeff McIntosh / THE CANADIAN PRESS)

OTTAWA -- The federal government is promising to piggyback on existing projects and networks to expand broadband access to rural communities as part of a larger strategy for rural Canada released Thursday.

Officials are also looking to rework some programs to make it easier for rural communities to benefit from federal spending as part of the work.

But aside from specific targets to connect Canadians to high-speed internet service, the rural strategy is largely without benchmarks and opposition parties are criticizing the documents as being bereft of big ideas.

Rural Economic Development Minister Bernadette Jordan said the aspirational tone of the document reflects concerns from rural communities about a one-size-fits-all approach. She also said the release isn't aimed at helping the Liberals in the fall election, and hold seats in largely rural Atlantic Canada, but reflects concerns rural Canadians raised during consultations.

"We want to make sure going forward that we are addressing those concerns," Jordan said in an interview.

"In reality, rural communities haven't said, 'We want you to come in and fix our problems.' What they've said is, 'We want to work in partnership with you,' and that, going forward, is the biggest takeaway for us -- is how do we make sure that we are working in partnership with rural Canada, how do we make sure that everything we're doing is looked at through a rural lens?"

Jordan said what was needed was a way to pull together all the different spending programs that provide money to rural communities and make it easier for them to apply and not be buried in red tape, particularly on broadband internet projects.

About 37 per cent of rural households have access to internet connections with download speeds of 50 megabytes per second, compared to 97 per cent of urban homes. The Liberals have promised to close that gap through $6 billion worth of plans to connect every household in the country to high-speed internet by 2030.

The Canadian Internet Registration Authority said the documents set a foundation that industry, advocates, and all levels of government need to build on. The Canadian Chamber of Commerce said in a statement that it was looking forward to seeing details and a timeline.

Officials hope to reduce the costs of upgrading connections by identifying infrastructure projects where fibre-optic cable can be laid at little cost, such as when a rural community reconstructs a road. Places like municipal offices, libraries, schools, and hospitals will be given priority because they have more people using connections at once, and connecting them can help make the case to extend broadband to surrounding homes, the government said.

Conservative critic Dan Albas said the strategies are a repackaged version of existing programs, including one that the auditor general questioned for its cost-effectiveness.

"This government has dramatically failed to deliver internet service to rural and remote Canadians and nothing released (Thursday) will change that at all," Albas said in an interview.

In a written statement, the federal NDP said many of the programs in the documents "have no rural lens or targeted approach for rural Canada," making it "just another pre-election PR document."

The 2016 census showed that 82 per cent of the Canadian population lived in large and medium-sized cities, one of the highest urban concentrations among G7 nations, but percentages vary by province. For example, almost half of those in Atlantic Canada live in rural communities -- an area of the country the Liberals are hoping to hold seats after sweeping the region in the 2015 election -- compared to fewer than 10 per cent in British Columbia.

Rural communities tend to have higher percentages of Indigenous residents, fewer newcomers to the country and older populations than urban centres do.