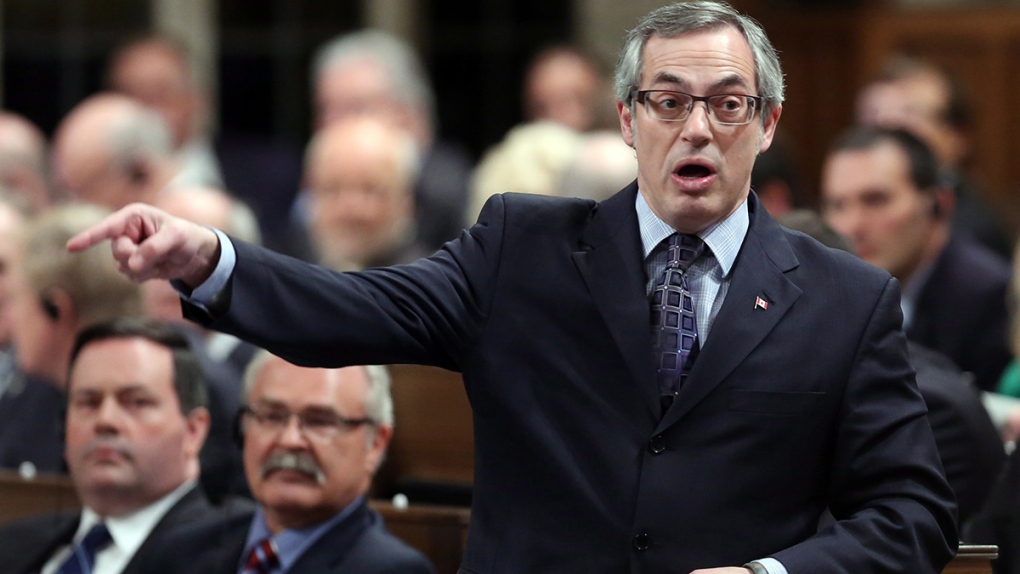 Treasury Board President Tony Clement stands in the House of Commons during question period, in Ottawa, Thursday, Feb. 6, 2014. (Fred Chartrand / THE CANADIAN PRESS)

OTTAWA -- Billions in federal funding left unspent each year is a sign of good financial management, says the minister who controls the government's purse strings.

There's no reason departments need to spend every dollar they're allocated, Treasury Board Tony Clement said in an year-end interview with The Canadian Press.

"When money is passed by Treasury Board, it is up to a certain amount; there is a public policy goal that has to be attained," he said.

"And you know my opinion is, if they can achieve the public policy goal at a more accountable cost to the taxpayers, I think that's generally a good thing."

Last year, $7.2 billion was handed back to the treasury, with funds left unspent in most government departments.

The money was returned even as departments continue to grapple with cuts made as part of the deficit-busting exercise the government launched in 2012 after years of stimulus spending threw the books into the red.

For at least one department, those efforts are why some of their funding lapsed.

"The balance of the lapse, primarily in operating expenditures, can be attributed to the RCMP aligning its cost structure to implement savings initiatives announced in the 2012 Economic Action Plan," the RCMP say in their 2013-2014 performance report.

At Foreign Affairs, over $25 million earmarked for programs in the developing world went unspent because of what the department describes as "project concepts not receiving project initiation authorization."

On the veterans' file, the lapsed funds -- some $1.1 billion over the last seven years -- have become a politically-sensitive issue, with veterans' groups decrying the move as penny-pinching at the expense of benefits.

But Clement defended the cash coming back.

"Many of these programs are based on applications to the program or based on people fitting into the criteria," he said,

"I think a good case could be made that if less money is needed, it is because there is less demand for the program for whatever reason, demographic reasons or because the economy is better . . . I don't necessarily consider it a bad thing just as a matter definition, that if the money is not spent that that is somehow bad for public policy."

Government policy dictates that any money not used by year-end has to be handed back over to the treasury, though departments can save two per cent of the unspent cash for use the next year.

If the government is doing its job, there should be no unspent funds, said Mathieu Ravignat, the NDP's critic for the Treasury Board.

"Where the problem is (is) the financial management between the Treasury Board and the various departments."

Lapsed funds are not a new phenomenon; in the past it was common for departments to rush to spend leftover cash by year end, a phenomenon known as March madness.

Efforts to reign in spending have done away with that practice, Clement said.

"I have successfully wrung that out of the system and that's why you're seeing lapsed funding," he said.

"To me that's a sign of good management, not the reverse."

But when managers are rewarded for not spending money by way of incentives -- a program the Conservatives put in place as part of their deficit reduction exercise -- that's not a good sign, said the NDP's Ravignat.

"Why have your department or your ministry plan to spend this money on delivering the services and then tell them, afterwards, that there is a reward for not spending it?," he said.

Clement dismissed any suggestion that the lapsed funds are a deliberate part of the Tories' budget-balancing strategy.

That's not a viable way to balance the books, the minister said.

"You've got to look at the ongoing program budget in order to balance the budget in any meaningful way," he said.

"Our view is that you can't use trickery to balance the budget. That never works either. So it has to be a real and substantial balanced budget and that's what we're aiming for."