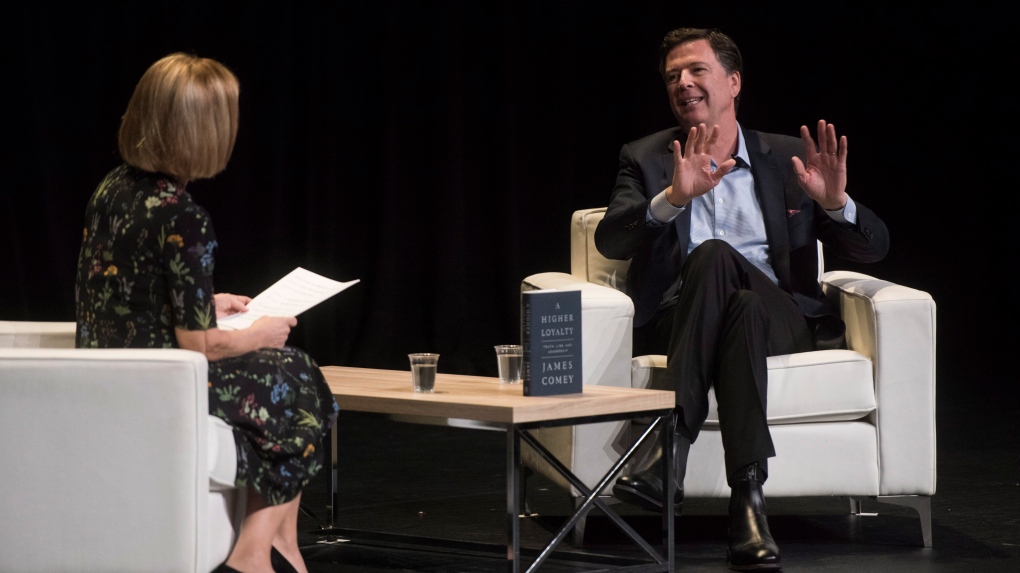 TORONTO -- Former FBI director James Comey likened U.S. President Donald Trump to a self-serving Mafia boss Thursday during a talk in which he defended the decision to reopen the Hillary Clinton email investigation just days before the 2016 vote.

Speaking in Toronto, Comey lamented the current state of American politics, suggesting truth has all but disappeared from public discourse.

"Ethical leadership is about having external reference points. Near as I can tell, this president only has one reference point and it is internal," Comey said during a conversation with bookstore executive Heather Reisman. "That's very similar to a Casa Nostra boss."

Trump, Comey went on, makes decisions without proper information because nobody wants to challenge him.

The president fired Comey, 57, a year ago this week amid reports he was unhappy with the FBI investigation into possible collusion between his campaign and Russia. Just a week before his dismissal, Comey had given details to the U.S. Senate about the probe into Russia's alleged effort to sway the vote in Trump's favour.

Comey, however, refused to offer an assessment of whether an investigation by special counsel Robert Mueller into links between the Trump campaign and Russia might lead to impeachment proceedings or criminal charges against the president.

"I can't rely on anything I see in the media because there are no leaks coming out of Robert Mueller's operation, so I don't know what he knows," Comey said. "I really don't know what he has. What I do know is that he and his team are an all-star team of pros."

The former FBI boss, who has just released his book, "A Higher Loyalty," also discussed the email scandal that dogged Clinton, the former Democratic candidate who lost to Trump.

He was adamant he had no choice but to announce 11 days before the presidential vote that the FBI was reopening a probe into whether she had criminally mishandled classified information when she was secretary of state.

The bureau and justice department, he said, have to be seen to be independent and professional, and the information that came their attention about thousands of recently discovered emails meant the public had to know. Concealing the information would have been "catastrophic," he said.

"The act of concealment would be devastating to the institutions of justice for a generation," Comey said. "And, if she's elected, devastating to her presidency."

After closing the second investigation, Comey characterized Clinton's conduct with respect to the sensitive emails as "extremely careless." What he should have said, he now says, was that she had been "really sloppy."

Ultimately, he said, the investigation uncovered "evidence of wrongdoing" but not enough to warrant prosecution. The bureau found no indication Clinton knew that what she was doing was wrong.

Even in retrospect, he said, he would make the same key decisions he made at the time.

Comey went on to slam Trump for crossing the line by meeting alone with him shortly after Trump was elected.

"He knew what he was doing," Comey said. "The first explicit request for loyalty surprised me. By the time he came back and asked for my loyalty again, there's no doubt he knew it was a violation of norms."

Comey also said he would work to make Americans understand the importance of integrity in public office.

"I'm worried that people are going to get discouraged and come to believe that truth is not the central value of leadership," Comey said. "We're in great peril now as a country of that touchstone of the truth being washed away like a sand castle."