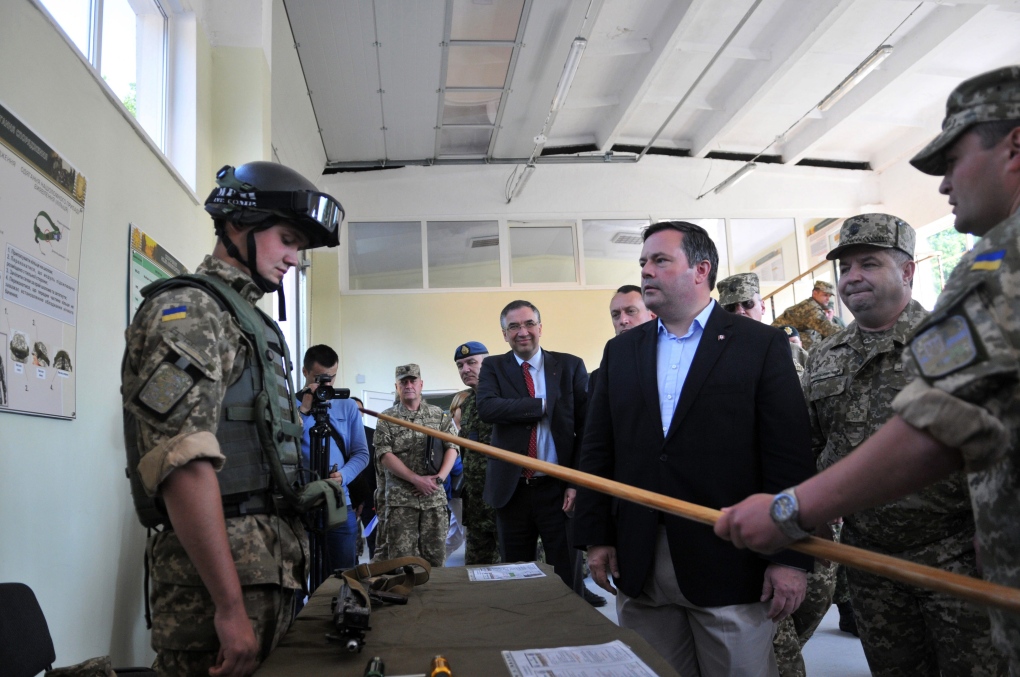 He was scheduled to tour the multi-national centre at Yavoriv, near the Polish border, on Saturday where the roughly 200 combat instructors will set up shop in the coming weeks.

Both the U.S. and Britain have been at the training grounds since the spring, running hundreds of Ukrainian national guardsmen through remedial, basic military courses.

Canada's contribution was announced with much political fanfare in mid-April, but it could be August before the full contingent is on the ground.

"We do not yet have a technical assistance agreement with Ukraine," Kenney said in an interview with The Canadian Press. "We need a legal framework before we can fully deploy our trainers here.

That's one of the reasons for my visit. It's to resolve some of the outstanding, technical legal issues."

Kenney did not say what the hang-ups might be, but pointed out the Americans had worked on their technical agreement with Kyiv over year before Canada and that they were in a better position to move ahead quickly.

Aside from negotiating the legal framework with the Ukrainian government, Kenney says the Pentagon only recently gave Canada the green light to share the training base, which was originally leased to NATO at a time when the former Soviet republic was on its way to joining the alliance.

"We realized we could save a lot of money if co-located with the Americans at the same training base and shared logistics and there would be an economy of scale there, and for internal reasons they couldn't actually give the green light until quite recently," he said.

There was a similar gap between the announcement and the deployment of troops and aircraft last fall to do battle with the Islamic State. Canadian officials had to scramble to exchange diplomatic notes with Iraq in order to define legal protections for troops and pilots who would be called upon to use deadly force.

The Harper government elected to not go all of the way with Baghdad and create a status of forces agreement, something that concerned opposition parties.

Late Saturday, Kenney announced $15 million in funding, $3 million of which dates back to March 2014 and is to be spent on investigative reporting in the country's media. The bulk of the cash is going towards judicial reform.

There are, at the moment, approximately 40 Canadians on the ground in Ukraine, conducting a reconnaissance and preparing for the larger contingent.

The bulk of that force, which will be in Yavoriv, will carry out combat arms training, but a handful will also be sprinkled at other centres, notably the Ukrainian Ministry of Defence de-mining centre in Kamyanets-Podilsky in the country's extreme southwest.

There will also be medical trainers, military police instructors, flight safety teachers and others showing Ukrainians how to set up an effective military supply chain.

But it is the hard-won Afghan war skills of detecting, avoiding and dismantling roadside bombs that will be of exceptional value, Ukrainian military officials have said privately.

On Thursday, NATO announced it is establishing a new trust fund for Ukraine that "will aim at de-mining, and also on countering improvised explosive devices."

Seven Ukrainian soldiers died earlier this month when their truck hit a mine not far from Krasnogorivka, west of Donetsk. A passenger bus blew up after striking a mine last spring, killing three people in the same region.

The United Nations Children's Fund (UNICEF) has warned that unexploded mines and ammunition pose a special threat to children in eastern Ukraine.