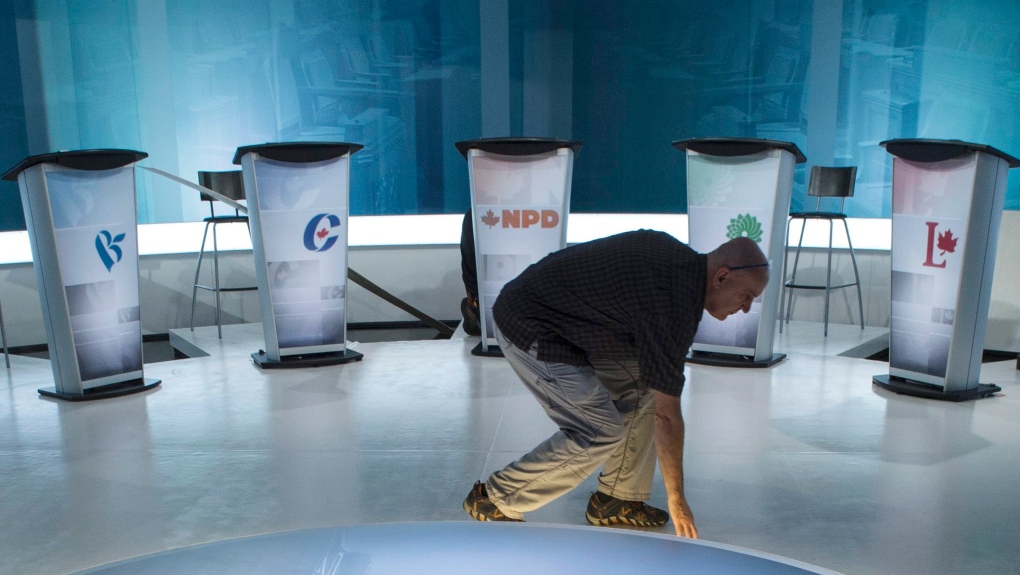 File photo: A technician cleans the set in preparation for the French language leaders debate on September 23, 2015 in Montreal. (THE CANADIAN PRESS/Paul Chiasson)

The Canadian Debate Production Partnership announced on Tuesday that Liberal Leader Justin Trudeau, Conservative Leader Andrew Scheer, NDP Leader Jagmeet Singh, Bloc Quebecois Leader Yves-Francois Blanchet and Green Party Leader Elizabeth May will all be taking part in an English debate on Oct. 7 and another in French on Oct. 10.

Moderators for the debates have also been decided. Both debates will have a unique format in that it will feature five moderators from different news organizations.

Guiding a separate section of the English debate will be: Lisa LaFlamme from CTV News, Rosemary Barton from CBC News, Dawna Friesen from Global News, Susan Delacourt from the Toronto Star, and Althia Raj from HuffPost Canada.

The French debate on Oct. 10 will be moderated by Patrice Roy from Radio-Canada, Hélène Buzzetti from Le Devoir, Patricia Cloutier from Le Soleil , François Cardinal from La Presse and Alec Castonguay from L’actualité.

“Canadian interests will be well represented by these distinguished journalists,” the Canadian Debate Production Partnership (CDPP) announced in a news release.

Both debates will take place at the Canadian Museum of History in Gatineau, Que.

In July, the commission’s Executive Director Michel Cormier announced the debates will be streamed free online and that they’ll be translated into several languages, including some Indigenous languages, and that they will feature sign language interpretation, closed captioning and described video services.

Criteria for the debates have been set by the federal government. Under the criteria, party leaders must meet two of the three requirements:

1) Representation in the current House of Commons by a member who was elected as a member of that party;

2) A determination of whether the party will run candidates in 90 per cent of electoral districts; and

3) Whether the party received at least four per cent of valid votes in the last election, or have a "legitimate chance" of winning seats, based on polling data and at the discretion of the Commissioner of Canada Election.