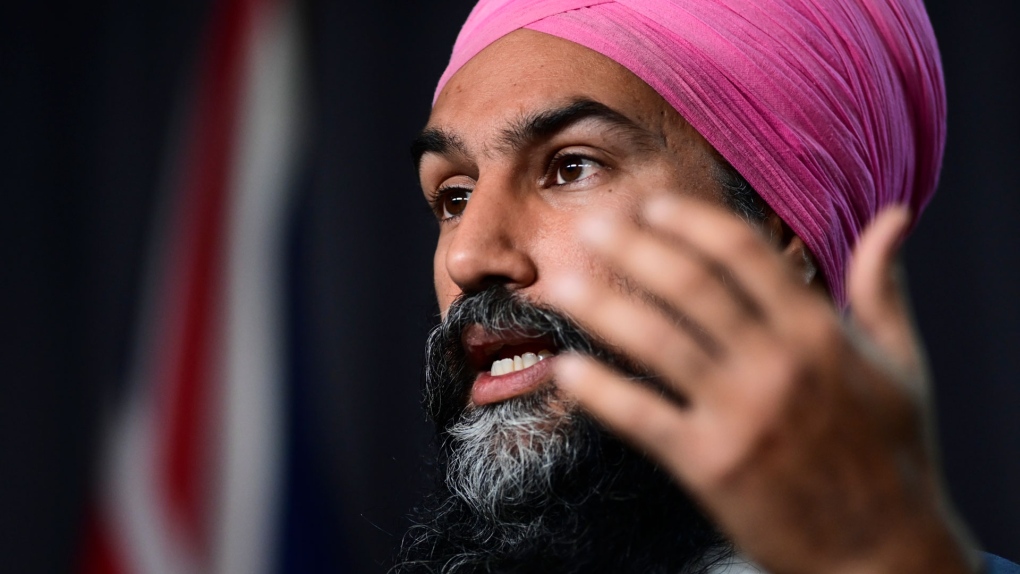 OTTAWA -- New Democrats are seeking the support of the House of Commons in calling on the Liberal government to eliminate for-profit long-term care.

The NDP unveiled its proposal for the long-term care sector earlier this year, presenting it as a potential election promise as parties gear up for a possible 2021 election campaign.

At the time, New Democrat Leader Jagmeet Singh said an NDP government would bring together provincial and territorial leaders, experts and workers to set national standards for nursing homes, benchmarks that would be tied to $5 billion in federal funding.

"Let us remove profit from long-term care, beginning with Revera."

The motion includes a call to immediately turn Revera -- a company that runs more than 500 seniors' homes in Canada, the United States and the United Kingdom -- from a for-profit chain owned by a Crown pension fund into a publicly managed entity.

"The federal government does not have the legal authority to do what the NDP is proposing," Schulte said in a Twitter thread Monday morning that was retweeted by federal Health Minister Patty Hajdu.

During House debate Monday afternoon, Hajdu reiterated the federal government's pledge to establish national standards, which would be applied in separate deals struck with provinces that want to meet them. The government has not laid out what those benchmarks should be, though the health minister stressed the need to boost wages and working conditions for personal support workers.

Prime Minister Justin Trudeau has said he respects provincial authority when it comes to long-term care, and supports the sector through billions of dollars in added funding allocated to the provinces during the COVID-19 crisis.

Singh did not offer a projected cost of phasing out long-term care, which could climb into the billions if community agencies and municipalities seek funding to run more homes and provide more beds.

Another hurdle is that nursing home operators would still own the buildings and real estate even if provinces opt against renewing their licences, making for potentially pricey government purchases.

"We will work with the parliamentary budget office and other levels to ascertain the full cost of it," Singh told reporters.

Some lawmakers bristled at the prospect of federal politicians encroaching on provincial turf.

"Provinces have been clear. They don't want national standards," Bloc Quebecois MP Louise Chabot said during debate in the House.

A vote on the NDP motion, which is not binding on the minority Liberal government, is expected Tuesday.

"Even before COVID-19 we have a litany of research that shows that, on the whole, these homes perform worse than non-profit and municipal homes," said Dr. Vivian Stamatopoulos, a long-term care advocate and professor at Ontario Tech University.

She said at the press conference that for-profit residents are more likely to wind up in hospital and to die within six months of admission to a home.

"They hire less full-time permanent staff to boot, and they also pay their staff less, which results in a revolving door of workers," Stamatopoulos said.

The Public Sector Pension Investment Board (PSP Investments) -- the Crown pension plan manager that owns Revera -- said the funding model for long-term care is a key public policy debate. "PSP Investments and Revera will continue working with all levels of government to find the right solutions for the LTC industry and discuss lessons learned from the ongoing pandemic," said spokeswoman Verena Garofalo.

More than two-thirds of Canada's COVID-19 deaths have occurred in long-term care facilities, with the percentage breaching 80 per cent during the first wave.

In Ontario, where the second wave has proven even deadlier than the first in nursing homes, an independent commission has been convened to examine the virus's effect on the sector. The commission is slated to deliver its final report at the end of April.

More than a quarter of the country's 2,039 long-term care homes are for-profit -- 58 per cent in Ontario, the highest proportion of any province -- according to the Canadian Institute for Health Information.

She suffered numerous falls, including one that required 30 stitches and a three-day stay in hospital, he said at Monday's news conference organized by the NDP.

"Sometimes she didn't get medications because there was no nurse available to administer them. Other times she was overmedicated. She once wore the same bandage on her leg for three days straight," Gruntke said, adding that he didn't blame "overworked and underpaid" staff.

His mother complained about respiratory issues for three days before staff found her unconscious in her room and sent her to hospital on Sept. 26, he said. Three days later she had a heart attack, and died on Oct. 3.

"The difference in care between for-profit and not-for-profit is like night and day," Gruntke said, citing the "warmth and kindness" with which staff attend to his 93-year-old grandmother, who lives in a not-for-profit home. "Maybe if my mother had the proper treatment she would still be here today."

This report by The Canadian Press was first published March 22, 2021.