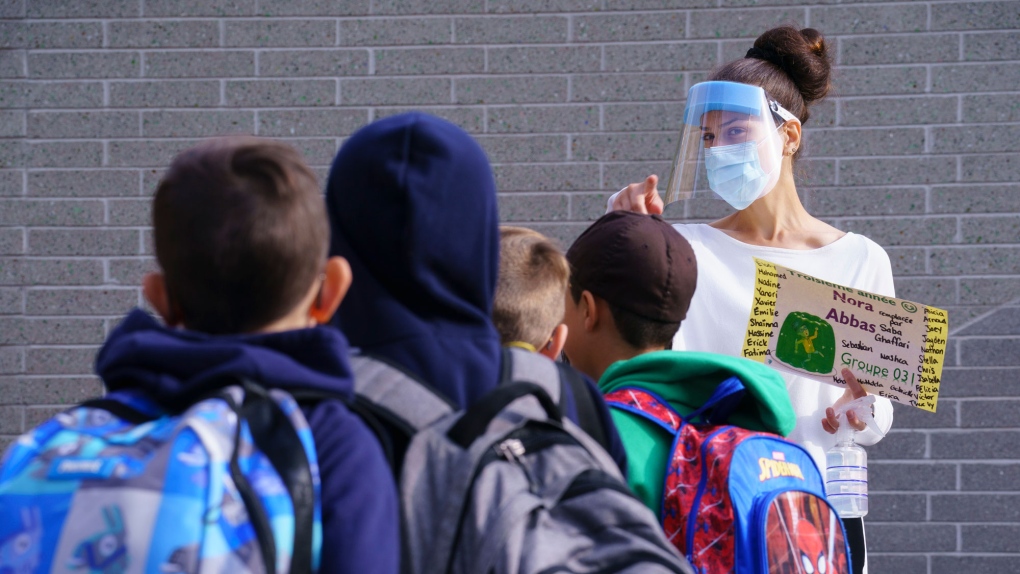 A teacher wearing protective equipment greets her students in the school yard at the Philippe-Labarre Elementary School in Montreal, on Aug. 27, 2020. THE CANADIAN PRESS/Paul Chiasson

TORONTO -- Virtual learning for Kaaren Tamm's daughter consisted of a five- to 10-minute video greeting each morning and afternoon, and then she'd stop paying attention. That was on a good day.

The Toronto mom says that's all the four-year-old could muster to contribute in her junior kindergarten class, which shifted online twice this school year.

Easily distracted and prone to meltdowns, the girl did not adjust well when a COVID-19 case triggered a class quarantine and forced everyone to go digital for two weeks in October.

It was just as bad when in-class learning halted for six weeks in January and February.

"There was no learning going on at all," Tamm admits.

It turned out to be more than just routine defiance -- Tamm's daughter was diagnosed with autism in November.

Now that schools have reopened, Tamm says the girl is better able to focus and participate in person. But she suspects ongoing struggles to master fine motor skills -- such as holding a pencil and cutting with scissors -- were made worse by pandemic-related upheaval.

Tamm says the school is trying to find her an occupational therapist, but it could take a while. Still, she's not worried.

"When the help does become available then I'm sure she will catch up," says Tamm.

Whether derailed developmental and academic goals can -- or will -- be addressed is a pressing question for frazzled families still reeling from COVID-induced chaos.

One year after students were sent home for an extended spring break to suppress COVID-19 spread, early research and anecdotal reports point to measurable learning loss, racial and socioeconomic disparities, and an urgent need to mitigate harms that may not even be obvious yet.

"We need to mobilize more -- everything that we can -- to help teachers deal with this crisis," says Carleton University neuroscience professor Amedeo D'Angiulli, who predicts more developmental and learning disorders due to a combination of delayed medical screenings and school interventions.

"The real wave will be that in two, three years we'll wake up and we'll see that we have more social inequality, illiteracy and other things that we then need to fix."

He says he and his students analyzed about 100 papers on the pandemic's impact on education and child development around the world, finding delays at every age to varying degrees and in different ways.

Of particular concern are the early readers in Grades 1, 2 and 3, says University of Alberta researcher George Georgiou, director of the J.P. Das Centre on Developmental & Learning Disabilities.

When Georgiou compared Alberta reading scores in September 2020 and January 2021, he found students in these grades improved, but were still performing six-to-eight months below their grade level.

"Because they cannot read, they tend to also act out, so it's related to externalizing behavioural problems. They act out, they are more aggressive, (there's) depression, lower self-esteem."

It's entirely possible those who struggled have improved and could finish the school year close to average, says Georgiou, but that depends on timely, targeted interventions.

He points to success in Alberta's Fort Vermilion school division, which identified struggling readers in September and gave them focused tutoring four times a week. By January, 80 per cent of Grade 1 and 2 kids were reading within their grade level.

"This tells you that if you don't provide intervention right away, you will end up in a situation where most of your kids in Grades 1, 2, 3 will be reading well below grade level. But if you act proactively ... then you have good chances to support these kids who were left behind," he says.

This places immense pressure on teachers, many of whom are already burned out, says York University education professor Sarah Barrett.

She surveyed 764 public and private school teachers last May and June, and did in-depth interviews with 50 to learn more about efforts to meet developmental milestones, some of which "became next to impossible."

Barrett spoke to teachers again in December and January and found social and emotional hurdles just as worrisome, with teachers unsure how kids can ever gain ground on pandemic-prohibited people skills such as reading facial cues and body language.

"They sound really demoralized. They're very glad to have their students in front of them again, but they know that the students that need the most are the ones that aren't getting what they need," says Barrett, noting teachers feared most for students with special needs, those living in poverty, racialized and Indigenous students, as well as English-language learners.

"A full year is more than just a disruption. It means that across the entire system, adjustments have to be made."

As daunting as that sounds, it's only a crisis if we allow it to become one, says Julie Garlen, co-director of childhood and youth studies at Carleton University in Ottawa.

Benchmarks are socially constructed targets that can be changed, she says, and this is a good time to rethink the education system as a whole.

"Is there flexibility in those benchmarks? Why do we have the benchmark set as we do?" says Garlen.

"I'm not saying that there shouldn't be benchmarks (but) I think that we can understand now that it's not really possible to just go back to the old curriculum."

However, there are risks to adjusting academic requirements, counters D'Angiulli.

He says provincial benchmarks are already set at "the bare minimum."

"What happens if you say, 'OK, let's get rid of this and let's shift'? It's lowering further the expectations, and that is really, really very, very, very dangerous," he says, predicting that could jeopardize our global standing if other countries prove better at maintaining their education goals.

Education and international development expert Prachi Srivastava would like to see efforts focused on high risk neighbourhoods and schools, but points to structural barriers that make widespread reform difficult.

Education is largely the domain of each province and fails to integrate overlapping issues such as health, labour, childcare and gender equity, says Srivastava, associate professor at the University of Western Ontario.

She describes this as "the largest education emergency" in global history and wonders why there appears to be little evidence of concrete measures to combat it.

"It actually shows how myopic we have been in Canada in terms of understanding, recognizing and incorporating lessons from emergency education," she says.

When it comes to primary and secondary education, she muses on strategies such as accelerated learning programs, or extending the school year to a 12-month cycle with reorganized breaks.

Garlen urges policy makers to consult families and students when pursuing fixes, especially those prone to be disproportionately impacted by COVID-19.

The pandemic laid bare longstanding inequities in education that only worsened with the threat of COVID-19 infection, with some families more likely than others to live in crowded housing or have inconsistent internet access. Many didn't have devices required for online learning, childcare or the ability of parents to work from home.

"Maybe could we not put all of the focus on just information and the consumption of content (but) focus on socialization and well-being and connections and relationships. Because I think that that is where students have suffered the most," says Garlen.

"They can learn long division next year but if they don't have support in recovering from the challenges that they face during this time that could be something that will follow them their whole lives."

This report by The Canadian Press was first published March 22, 2021