Trudeau's plan to slash Canada's emissions was scoffed at by critics on both sides of the carbon tax argument. Groups that favour carbon prices argued Canada's proposed cuts were nowhere near big enough while opponents accusing the government from buying votes to outright lying about whether the rebates will really offset the increased cost to families.

Trudeau said there is both a "moral and economic imperative to act" to manage climate change, so the next generations of Canadians aren't left in a world where monster storms and massive droughts burn up or flood out major portions of the planet.

"Will we kick this can down the road yet again to be dealt with in another place or at another time, or will we show some courage and do what needs to be done for this generation and the next?" he said, addressing students at Humber College in Toronto.

Tuesday's announcement set the stage for what will be a key issue in next year's federal election. Trudeau promised a national price on carbon in the 2015 campaign. In 2016, he told provinces if they didn't introduce their own price on carbon, Ottawa would do it for them.

In 2017, he gave them almost a year to come up with a plan of their own that met federal standards. Four provinces did not, and so on April 1, Saskatchewan, Manitoba, Ontario and New Brunswick residents will start paying a $20 per tonne carbon tax on fossil fuels.

It will add about $2 to a tank of gas, or $8 to a monthly natural gas bill. The prices of many consumer goods and services will also go up to reflect the carbon tax that businesses pay. Ottawa estimates people in those provinces will pay between $202 and $403 more, on average, because of the carbon tax in 2019-20.

To minimize the impact of those costs, residents in those provinces will get carbon price rebates when they file their income taxes that range from an average $248 in New Brunswick, to $598 in Saskatchewan.

The amount paid depends on the amount and types of energy consumed. Payments will be determined based on family size. People who live outside big cities will get 10 per cent more to account for a higher reliance on fossil fuels and lack of access to things like public transit.

Officials said more than 70 per cent of households will end up receiving more than they pay. 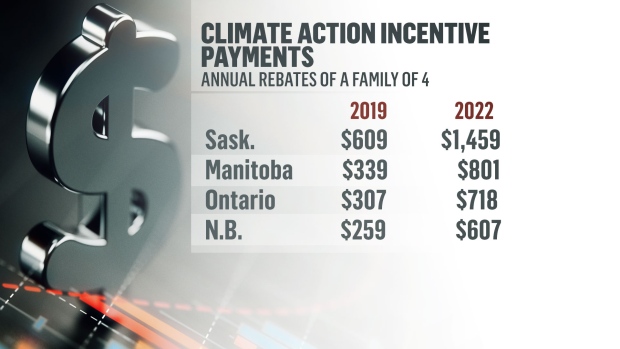 Speaking late Tuesday to Liberal supporters in Montreal, Trudeau praised Quebec and British Columbia, which have both imposed a so-called carbon tax.

But he added there are still parts of the country,"where people refuse to get it."

"It's that they refuse to see that moving forward in a responsible way to fight climate change is the only choice we have right now," he said.

Trudeau pointed to the 50 people who died a few months ago from a heat wave in Montreal, wildfires, droughts, floods and other extreme weather events right across Canada.

"Nobody has to be convinced anymore that the environment is something we need to take care off, the questions now is, are we going to act or not?"

The prime minister said conservative politicians are "banking on the fact that Canadians are not going to want to act."

The government expects to collect more than $2.36 billion from the four affected provinces in 2019-20, and says 90 per cent of the revenues collected will be returned to individuals via the rebates. The rest will be parceled out to small businesses, colleges, schools and hospitals in a special fund that has yet to be worked out.

Earlier in the day, Trudeau said every penny will be rebated in some way and the program will be audited and publicly reported on each year. He said people can save even more by finding ways to reduce their energy use, and subsequently, their emissions.

Not everyone believes him, and the next election is shaping up to be a battle royale over the carbon price.

Conservative Party Leader Andrew Scheer, who has promised the carbon tax will be scrapped if he becomes prime minister, said Tuesday it is a lie that most people will get a rebate larger than their carbon tax bill.

"At the end of the day, Canadians know that a measly $12.50 a month will not cover the true cost of this carbon tax," he said. "Life is going to get a lot more expensive for hardworking Canadians families and large industrial polluters are getting off scot free."

Scheer has said repeatedly that carbon prices do nothing for the environment. He has yet to explain exactly what he would do to cut Canada's emissions, but hinted last weekend his plan would find ways for Canada to reduce global emissions rather than domestic ones.

The Conservatives also accused the government of letting big industry entirely off the carbon tax hook. However companies that emit more than 50,000 tonnes a year -- there were 174 such companies in the four provinces in 2016 -- have to pay the carbon levy, but only on a portion of their emissions.

Environment groups were happy with the carbon price but say the government has to do much more.

The carbon price plans at the provincial and federal level will slash between 50 and 60 million tonnes from Canada's annual emissions by 2022. However, Canada needs to cut more than 200 million tonnes by 2030 to hit its existing emissions target, and more than 300 million tonnes to get to the recommended target of a recent United Nations climate change report.

Green Party Leader Elizabeth May applauded the announcement but said Canada needs to increase its target and adjust its plans accordingly.

Environment Minister Catherine McKenna said the carbon price is set to rise by $10 each year until 2022, and that the government will review it then to determine if it needs to needs to be raised further.

She said there are a number of other initiatives in place or coming that will work with the carbon price to cut emissions, including phasing out coal, cutting methane from oil and gas production, and making buildings more energy efficient.

Many of those details will be released in the coming months, McKenna said.

With files from Ian Bickis in Toronto, Peter Rakobowchuk in Montreal.