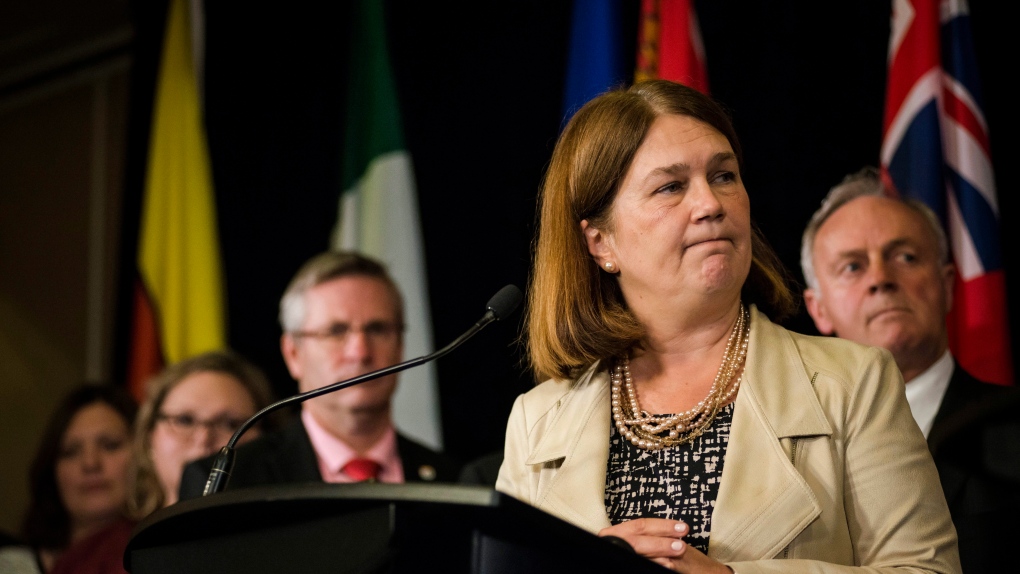 OTTAWA -- "For today we know that there will be a cut of $60 billion of funding from the federal government over the next 10 years regarding the delivery of care. And that implies that all provinces and territories will have to make difficult choices, because we are being asked to do more with less." -- Quebec Health Minister Gaetan Barrette speaking Tuesday in Toronto.

Ever since former federal Conservative finance minister Jim Flaherty announced to his shocked provincial counterparts in 2011 that Ottawa would be unilaterally imposing a new formula for the Canada Health Transfer in 2017, there have been cries about looming federal "cuts" to health funding.

The Conservative government pronounced that annual six per cent funding increases in place since 2004-05 would be reduced to an annual increase of three per cent, or to nominal growth in the economy, whichever was higher.

The change in the funding formula is set to begin in the next fiscal year that starts April 1. Provincial complaints have been loudly repeated this week as Jane Philpott, the physician handed the Health portfolio in Justin Trudeau's Liberal government, met with provincial health ministers to discuss a new health accord.

The Trudeau government is offering an additional $3 billion in funding over four years for targeted health measures, specifically home care, but is holding the line on the previous Conservative baseline funding for the health transfer.

So is Ottawa cutting $60 billion in health funding over the next decade and asking provinces to "do more with less" as Quebec's health minister contends?

This one earns a rating of "full of baloney" -- the statement is completely inaccurate. Here's why:

The current Canada Health Transfer was negotiated with the provinces and territories by Liberal prime minister Paul Martin in September 2004, resulting in a 10-year deal worth $41.3 billion that Martin characterized as "a fix for a generation." The accord provided for annual increases of six per cent.

Since then, the federal share of total provincial and territorial health care spending has climbed from about 17 per cent to about 23 per cent. In dollar terms the transfer, which includes direct cash and tax points, has increased to $36.1 billion this year from $21.5 billion in 2003-04.

The Martin deal was set to expire at the end of fiscal 2013-14 and federal-provincial discussions had quietly begun when Flaherty arrived at a finance ministers' meeting in Victoria in December 2011.

Flaherty ended any talk of negotiation when he presented a final federal offer: The annual six per cent increases would carry on for an extra three years, through 2016-17, after which the health transfer would be tied to nominal gross domestic product, a measure of economic growth that incorporates inflation.

Flaherty also said there would be three per cent "floor" below which annual health transfers would not fall.

At the time, nominal GDP was above four per cent. Nominal GDP for next year is forecast to be around two per cent -- below the three per cent "floor" increase that provinces and territories will receive.

The former Conservative government also changed the formula in its 2007 budget to allocate health transfers to provinces on a per capita basis.

"The government will ensure that the transition is fiscally responsible by implementing a by-province and territory protection that will ensure that no province or territory will receive less than its 2013-14 CHT cash allocation in future years as a result of the move to equal per capita cash," says Finance Canada.

Put another way, in Year 10 under a six-per-cent per annum increase the current $36.1 billion annual federal health transfer would rise to about $61 billion. Under the three-per-cent escalator, the transfer will rise to about $47 billion in Year 10.

Michael Decter, a health policy expert who served as Ontario's deputy minister of health, says there's a lot of "spin" from all sides in federal-provincial negotiations over health care funding.

"A cut implies you're getting less money, so there's some sophistry to this whole discussion," said Decter.

"But it is really hard, in my view and in the language of governments, to argue that reducing a growth factor is in fact a cut."

Consider an employee who has been working under a contract that provided annual salary increases of six per cent for the past decade. Now that the agreement has expired, the employer makes a take-it-or-leave-it offer of three per cent annual increases.

"It's a reduction in the growth rate, you can say that. But it's not a cut," Decter said of the federal CHT.

"I think if you said to someone on the street, 'They cut my pay,' they would think your pay went down -- not that it went up more slowly."

Lee Soderstrom, a retired economist at Montreal's McGill University who studies Canadian health funding, says there are clearly two perspectives on the changes, depending on whether you're shelling out or receiving.

"They're slowing the rate of increase," Soderstrom said of the federal funding.

"My comment would be: beware of getting caught up in a false debate."

Soderstrom said the conflict is all about point of view.

"There's no way you can sort that out and say, 'OK, this is the correct way to view it,' other than to describe what it means. Three per cent will mean a smaller number of federal dollars flowing to the provinces. It depends on how you want to define a cut.

"The correct statement is you're getting a smaller increase than what you received before."

Health Minister Jane Philpott put the future federal funding in dollar terms during a news conference with the provinces Tuesday in Toronto.

"It's really important for Canadians to know that we are going to continue to contribute to the Canada Health Transfer," she said.

"In fact, over the next five years there will be an additional contribution (of) something in the order of $19 billion on top of the already $36-billion per year. So that amount will continue to rise over time according to agreements. We are actually interested in giving even more than that ... in specific areas where we have recognized needs."

The simple fact is that in absolute dollars and inflation-adjusted dollars, federal health payments to the provinces will continue to go up, not down.

For those reasons, Barrette's assertion that there will a $60-billion cut in funding over the next 10 years is full of baloney.