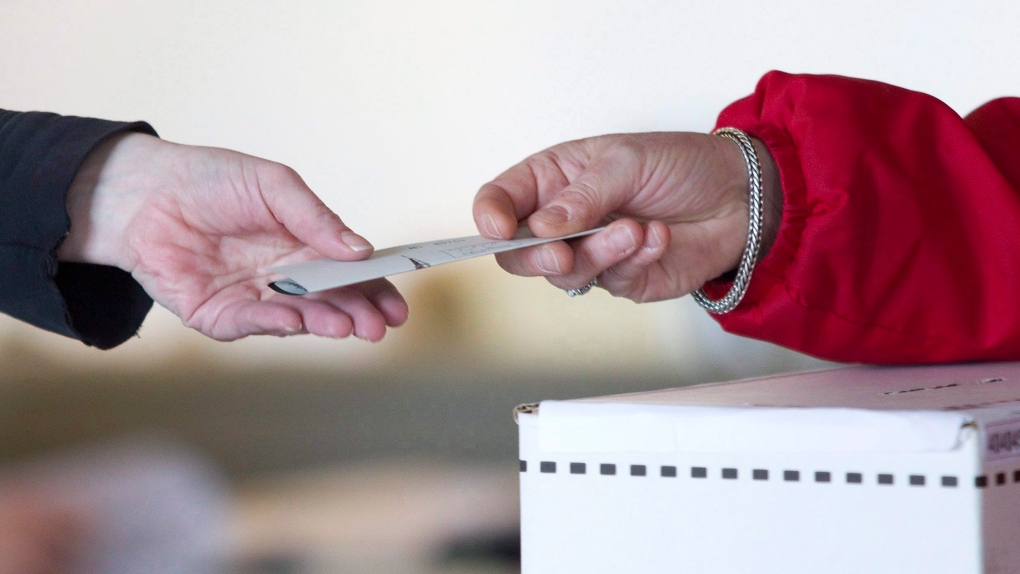 An election official hands back to a voter her marked ballot to place in a ballot box. (The Canadian Press/Chris Young)

TORONTO -- Long-term expats determined to cast a ballot for the Oct. 19 election have found a way to do so -- against the wishes of the Conservative government and despite a court ruling upholding their disenfranchisement.

However, the method costs money, travel, and time, prompting some to argue the rules have effectively made their right to vote subject to financial ability.

"Voting should not be something you must purchase," said Natalie Chabot Roy, 38, who was raised in northern Ontario but lives in Bonney Lake, Wash.

Earlier this year, the government successfully appealed a court ruling that would have allowed Canadians abroad for more than five years to keep on voting by way of a mailed "special ballot."

Nevertheless, at least one enterprising expat has already cast his ballot for the Oct. 19 election under another section of the Canada Elections Act that amounts to a barely accessible backdoor around the ban, and others are considering following suit.

That section allows expats who show up in the riding in which they lived before leaving Canada to vote -- if they show proof of the former residency along with accepted identification.

Ashley O'Kurley, 44, of Miami, Fla., was teary eyed when he cast his ballot in his old home riding last month -- his first vote as an expat since 2006.

"The one thing that distinguishes a citizen from a non-citizen is the right to vote: That is a sacrosanct principle in a democratic country," O'Kurley said.

"The quality of a democracy is defined by the degree to which people participate in it."

The certified financial planner, who moved to Miami in 2001, still has strong family ties in Sherwood, Alta., and still visits regularly. A federal Conservative candidate in 2000 who had worked for former Tory leader Joe Clark, O'Kurley was in the riding when Prime Minister Stephen Harper called the election.

He explained his circumstances to the local returning officer and said he wanted to vote.

"They called Ottawa, they checked on it, and said, 'Sure'," he said. "It was just fantastic."

Last week, Elections Canada finally updated its website to confirm the little-known voting information, even though spokesman, John Enright, said it was "not a new position."

The law barring long-term expats from voting has been on the books since 1993, but it was only in 2008 that Elections Canada began enforcing the rules, catching some Canadians abroad by surprise.

One was former Montrealer Nicolas Duchastel de Montrouge, 43, who went to the U.S. in 2000 for work and now lives in suburban Seattle. The ballot refusal in 2011 prompted him to delve into the rules, where he discovered what he called the "loophole."

In a letter to the self-described political junkie last month, a senior Elections Canada official confirmed his right to vote -- if he could show up in Hull, Que., where he was "ordinarily resident" before leaving Canada.

The problem, Duchastel de Montrouge said, is that he can't afford the $600 and two days off work to get there.

"It's not fair," Duchastel de Montrouge said. "The people at Elections Canada want us to vote, but they have to follow orders."

Chabot Roy said she also can't afford a trip to vote but said she might yet visit her brother so she can do so. She noted a group is raising money to fly 10 Canadians from Israel to Canada so they can vote and stump for the Harper Conservatives.

"Too bad my husband and I won't be financed to fly back to Toronto to vote," she said. "I would be willing to get on the plane to do so to make a point."