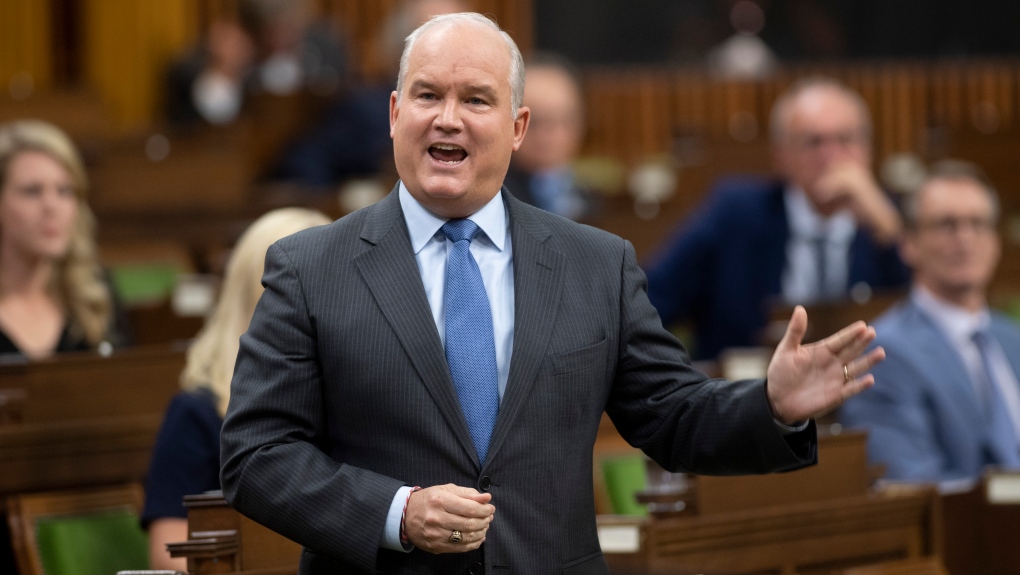 Leader of the Opposition Erin O'Toole rises during Question Period in the House of Commons Thursday October 8, 2020 in Ottawa. THE CANADIAN PRESS/Adrian Wyld

OTTAWA -- Conservative Leader Erin O’Toole and his caucus are looking to force a vote on their proposal to create a new parliamentary anti-corruption committee to take over investigating the WE Charity controversy as well as other lines of inquiry into alleged Liberal scandals.

O’Toole has given notice that on Tuesday—the Conservatives’ first scheduled opposition day of the session—he intends to move a motion proposing the creation of a Conservative-chaired super committee. The committee would comprise 15 MPs, which is more than what sit on most House of Commons committees, and would tackle the topic of Liberal corruption and potential conflicts of interest.

Specifically, the Conservatives want to keep digging into the WE Charity controversy, and this proposal includes a request for the same trove of documents currently being asked for at the House of Commons ethics and finance committees, where Liberal filibusters are underway to delay the votes on those motions.

The Conservatives say those asks would be rendered null, as this special committee would pick up the topic and allow all regular House committees to pick up on other business, such as the response to the second wave of the COVID-19 pandemic, which the Liberals say remains their focus and the focus of Canadians.

Prime Minister Justin Trudeau has already rejected the demand for a special committee, first floated by the Conservatives last weekend, chalking it up to partisan politics amid a raging pandemic.

Government House Leader Pablo Rodriguez joined Trudeau at a press conference on Friday, where he echoed the prime minister’s sentiment and wouldn’t say whether the vote on this motion would be considered a confidence matter.

On Thursday he issued a series of tweets stating that all relevant witnesses including Trudeau have already testified, thousands of pages of documents have been released, and now says the opposition asking for personal financial information of private citizens amounts to “an abuse of power.”

Rodriguez said the Liberals would be supportive of a separate special committee focused on digging into all pandemic-related spending, where it’s possible tangents of these Conservative-alleged scandals could be evaluated.

It is not just the WE affair and the failed student summer grant program that this committee would be mandated to look at. The Conservatives say they also want to use parliamentary resources to study:

The motion is set to be debated for the majority of the day on Tuesday, before it would be put to a vote.

The Conservatives believe they have the backing of the other major opposition parties, the Bloc Quebecois and the New Democrats who have also expressed interest in forming a special committee, prior to the specifics of this proposal being released.

"We believe one special committee, that is focused on these allegations, is the best way to proceed because otherwise what we’ve got not only is duplication but also potentially gaping holes between the various committees studying this at various times," NDP House Leader Peter Julian told CTVNews.ca last week.

The support of these two caucuses would give the Conservatives the majority of votes needed over the minority Liberal government to pass their proposal.

The proposal, if passed as worded, would see the committee meeting within a week, granted “first claim to the priority use of House resources,” and instructed to issue an interim report by February 15, 2021.

The committee would also ask once again for Trudeau to testify, in addition to a series of other cabinet ministers.

In the motion, the Conservatives are asking other MPs to agree that “the WE Charity scandal has preoccupied Parliament since the Canada Student Service Grant was announced on June 25, 2020, and despite many meetings on this topic held by several of the standing committees of the House of Commons in the subsequent weeks, the outstanding and unanswered questions only became more numerous and increasingly serious.”