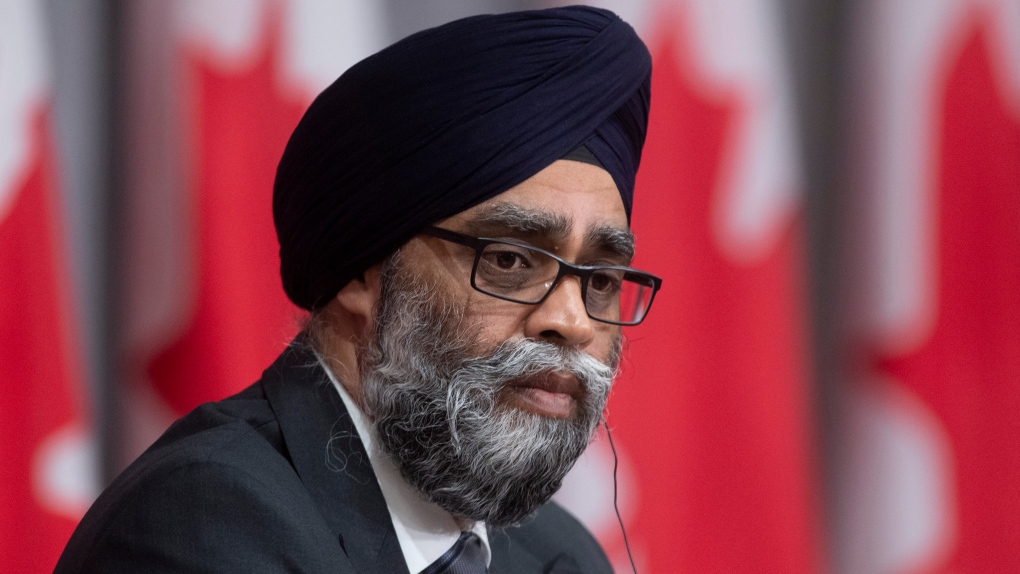 Minister of National Defence Harjit Sajjan is seen during a news conference Thursday May 7, 2020 in Ottawa. (THE CANADIAN PRESS / Adrian Wyld)

The two were arrested separately shortly after Canadian authorities in Vancouver detained Meng Wanzhou, the chief financial officer of Chinese telecom giant Huawei, who is wanted in the United States on fraud charges.

Meng, who has denied any wrongdoing, is now facing possible extradition to the U.S. while Chinese authorities have indicted the detained Canadians on what many observers believe are trumped-up spying charges.

Sajjan raised the cases of Kovrig and Spavor, whose access to Canadian consular officials has been limited and who are reportedly being kept in cells where the lights are never turned off, in response to a question about the security threat posed by China.

"I would be remiss if I didn't take this opportunity to talk about our two Canadians who have both been arbitrarily detained in China," he said during a panel discussion that also included his counterparts from Slovakia and Latvia.

"This type of hostage diplomacy is not what good rules-based-order nations do. So if you want to be part of the global rules-based order, we need to have greater predictability. And these are the types of things that go against the norm."

The minister went on to thank NATO allies for supporting Ottawa's calls for Beijing to release the two Canadians. Their cases, along with the detention of Meng in Vancouver since December 2018, has become the focal point for relations between Canada and China.

While Sajjan suggested Canada and China continue to enjoy a strong relationship "when it comes to some aspects of our trade," he cited Beijing's actions in the South China Sea as one example where it poses a security challenge.

China has been greatly expanding its military presence and claims of territory in the South China Sea despite opposition from of its neighbours as well as international rulings against some of its claims.

"These are some of the things that we will continue to monitor, and we need to monitor in NATO," Sajjan said.

"That's why we always talk about NATO needs to look 360. This is not just about being reactionary to a problem. It's about making sure any nation out there sees the collective will of what NATO brings to the table and that's that strong message of defence and deterrence."

This report by The Canadian Press was first published Oct. 7, 2020.