Canada 'pulling out all the stops' to fight COVID-19: Trudeau on $1B plan

OTTAWA -- The federal government is putting more than $1 billion into its plan to combat and mitigate the impacts of the outbreak of COVID-19 in Canada.

Health Minister Patty Hajdu said the pandemic declaration "doesn’t change our approach as a country… It just is an affirmation of what we saw coming."

The government is emphasizing how it is "well-prepared" for both the public health threat and economic impacts of the virus.

"The reality is that the number of people affected by the virus keeps climbing. Canada has been fortunate so far… but I know that people across the country are worried," Trudeau said Wednesday morning.

The prime minister said that government is prepared to take additional measures as the situation evolves, should businesses begin feeling a "cash crunch," as Trudeau put it, citing the impacts already on Canada's natural resource and tourism sectors.

"We are pulling out all the stops to make sure Canadians stay safe, healthy, and supported," Trudeau said. "We will get through what comes next together."

The announcement includes three new major spending commitments—a more than ten-fold increase in funding for research, more support for provinces shoring up their regional health authorities and stockpiles in anticipation of a worsened spread of the virus, and waiving the waiting period for employment insurance assistance for workers who are in quarantine.

The government's package encompasses the new economic and health supports, as well as those already underway, totalling $1.101 billion.

Here's how the government is allocating those funds:

The federal government says its response plan is based on expert guidance around pandemic preparedness, but is also leaning on lessons learned from the SARS outbreak in 2003.

The Liberals say their approach to tackling the virus is focused on: cross-government and cross-institution collaboration, evidence-based decision-making, a proportional response to the level of threat, and flexibility as the situation evolves.

How the funding is being spent 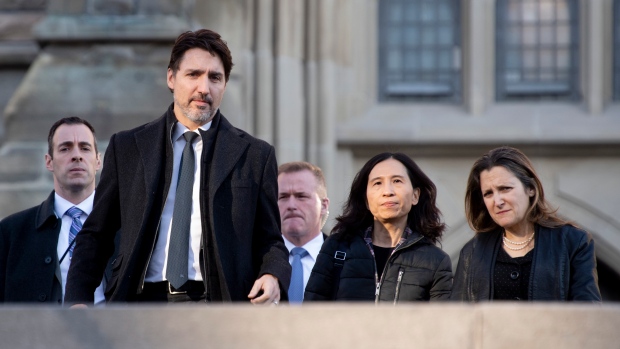 The $500 million being earmarked for the provinces and territories will be going towards "critical health care system needs" and to ensure that the premiers are all taking necessary measures to make sure hospitals and health services have enough equipment and staff. "Financial considerations should not and will not be an obstacle" in preparing, the government said.

For workers, the government will waive the one one-week waiting period for people who are placed in quarantine to receive their employment insurance right away, which is estimated to cost $5 million. As well, the $12 million for a work-sharing plan will help employers who are experiencing a business downturn.

The Liberals are "exploring additional measures" such as income support for Canadians who are not eligible for EI sickness benefits.

"No one should have to worry about their job if they have to be quarantined. No employer should feel like they have to lay off a worker because of the virus. We can support you, and we will," Trudeau said.

Hajdu said that the intent of the EI changes so far is to allow for Canadians to claim the support “without undue effort on behalf of the person to go out and get a note,” if they have received advice from a public health official to self-isolate.

The communication and public education portion of the government's efforts includes the coronavirus information line, available from 7 a.m. to midnight seven days a week (1-833-784-4397); additional funding for the Public Health Agency of Canada's outreach "to ensure that Canadians can make informed decisions on how best to protect themselves," such as infection prevention and attendance at mass gatherings; and targeted funding to address the particular vulnerability of Indigenous population given the state of infrastructure in some communities.

The travel measures Canada is taking include information and screening at all Canadian borders, regularly updating travel advice and providing 24/7 consular services, and assisting Canadians in being evacuated from coronavirus hotspots. That’s already happened with repatriating Canadians from Wuhan in China, and from two cruise chips. Questions remain about additional help for those currently in places like Iran, where the COVID-19 spread is rampant.

The government says that since early February it has sent 16 tonnes of personal protective equipment to China, the epicenter of the novel coronavirus.

So far, Canada has not closed its borders to travellers.

The Liberals are also considerably increasing the amount of money they are putting into research, earmarking on Wednesday another $248 million on top of the $27 million in research funding already announced by the federal government.

This money will focus on research on the virus being done by 47 teams across the country, aimed at speeding up the creation and testing of measures to combat the outbreak, such as a vaccine and antiviral drugs. This comes in addition to ongoing increases to lab testing capacity and Canada-wide health surveillance.

The special cabinet committee focused on the federal response to COVID-19 will continue to meet, with the focus on rapid decision making as the situation continues to escalate.

"It is becoming increasingly clear that the Trudeau government does not have a plan to respond to either the health or economic crisis that Canada now faces," he said.

Poilievre also said that his party thinks the government should have had a better plan in place earlier to set up self-quarantine to limit community transmission and "better screening at points of entry for people coming from high risk areas."

Later, fellow Conservative MP and health critic Matt Jeneroux said that while this is a first step, the opposition still wants more involvement and access to the high-level government decisions being made around coronavirus.

NDP Leader Jagmeet Singh said the plan is still not enough for workers who don’t qualify for EI.

“We need to fund them directly and there’s other countries that have figured that out, I believe Canada must and can solve this by giving direct funds to people so that they can stay home,” Singh said.

The funding package is set to be a key topic of conversation when Trudeau and his federal cabinet meets with the premiers during the first ministers' meeting happening in Ottawa over Thursday evening and on Friday.

The Canadian Chamber of Commerce is calling the government's announcement a "positive and pragmatic approach to the global risks of the spreading virus," while the Canadian Labour Congress wants to see additional assurances that workers' jobs will be protected.