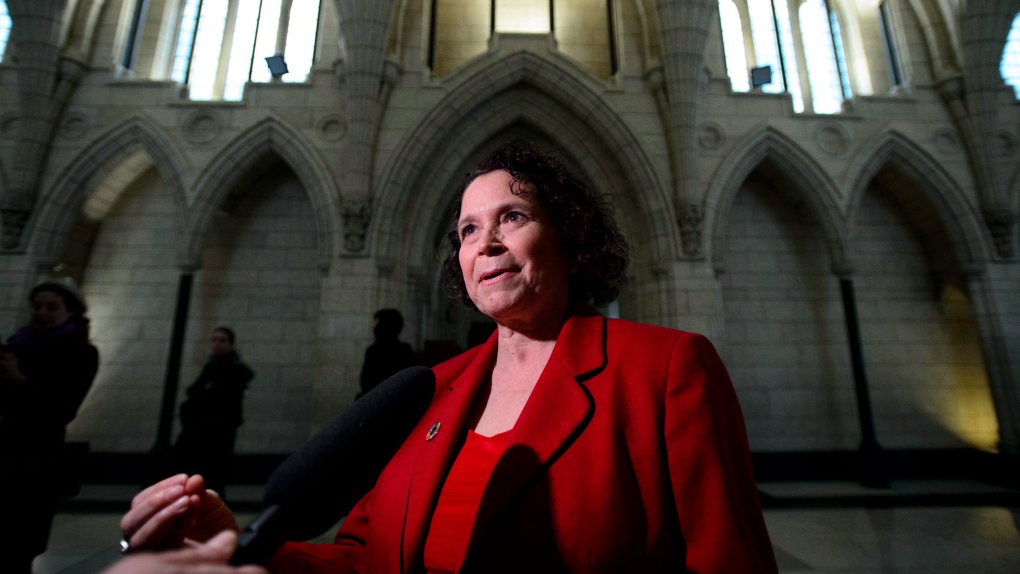 Julie Gelfand, commissioner of the Environment and Sustainable Development, arrives to appear as a witness at Commons committee on Parliament Hill in Ottawa on Tuesday, March 27, 2018. THE CANADIAN PRESS/Sean Kilpatrick

OTTAWA -- The federal government isn't properly managing the risks that farmed salmon pose to their wild counterparts, nor is it doing enough to ensure Canada is meeting its international commitments on biodiversity and sustainable development, Canada's environmental watchdog says.

In a series of new audits released Tuesday, environment commissioner Julie Gelfand takes a closer look at Canada's management of the $1-billion salmon farming industry, which she warns is lacking when it comes to assessing the risk that diseases among farmed fish pose to wild salmon.

The department has no requirement to monitor the health of wild salmon or the status of the ocean floor beneath penned salmon farms, said Gelfand, and the department is also providing better funding for research related to fish farms than it is for research to help monitor their impact.

"The department is at risk of being seen to promote aquaculture over the protection of wild salmon," Gelfand said after the reports were tabled in Parliament.

The research gaps are extensive enough that there's no way to determine the impact of fish farms on wild fish, she said. Those gaps include a lack of knowledge about the risk of disease, as well as the impact of the drugs used to treat those diseases. Canada also lacks an impact threshold to determine when to shut down or limit fish farming, she added.

Canada also lacks standards for the nets used to contain farmed salmon in the ocean -- a particular problem in the Atlantic, where heavy storms often batter salmon farms and destroy nets.

In 2015, 40,000 salmon escaped from farms in Newfoundland and Labrador, New Brunswick and Nova Scotia. Better standards are in place in British Columbia, where fewer escapes have occurred, the report says.

In response to Gelfand's report, Fisheries Minister Dominic LeBlanc said the government is "committed to ensuring all of her recommendations are acted upon and acted upon quickly."

The government is "wide open" to discussing with the provinces a change in management structure, he added -- one that would make clear that the federal government's primary responsibility is to ensure "there's no harmful interaction" between salmon farms and wild fish populations.

Gelfand's spring reports also look at Canada's commitment to the UN 2030 Agenda for Sustainable Development and the UN Convention on Biological Diversity, both of which, she warns, could become the latest international environment agreements Canada signs but does little to actually implement.

She cited a lack of government leadership to address the targets in those agreements, saying there is no way to properly assess how effectively government policies can contribute to meeting those goals.

The agenda for sustainable development is an international agreement for countries to work towards sustainable environmental, economic and social development, including gender equality, eliminating poverty, climate action and industrial innovation.

Canada committed to the 2030 agenda in 2015 and recommitted to it last year, but the audit says the government hasn't yet put in place the fundamental requirements to do more than pay it lip service.

"The federal government committed to implementing the 2030 agenda three years ago, but again, it is not ready to respect its international commitment," Gelfand said. "When will it be ready?"

The audit report looked at the period between September 2015 and November 2017. The federal budget tabled in February promised nearly $50 million between now and 2030 to create a specific government unit to oversee the agenda, as well as to fund monitoring and reporting by Statistics Canada, Gelfand acknowledged.

The statistics agency also expects this spring to have a data portal ready to report on the Canadian indicators around the UN 2030 agenda. That could address one of Gelfand's concerns that there are too many departments assigned as co-leads on the agenda, leaving no one to take full ownership of or leadership on the file.

"In my opinion, it is difficult to move forward with 10 hands on the wheel," she says.

Gelfand's third audit this spring looked at another unmet Canadian UN environment commitment, this one the UN Convention on Biological Diversity -- a legally binding treaty acknowledging that a global decline in biodiversity is one of the "most serious issues facing humanity."

Canada has had a biodiversity strategy under the convention since 1995; in 2002, signatories committed to reducing the rate of biodiversity loss by 2010. New targets were set for 2020 after that original deadline went wanting.

Environment Minister Catherine McKenna said the government remains committed to meeting its target of conserving 10 per cent of coastal and marine areas and 17 per cent of terrestrial areas and inland water by 2020.

"After 10 years of inaction by the previous government, we're all in," she said, adding that the Liberal government made "a historic investment in biodiversities" in the last budget.

However, Gelfand found Environment Canada isn't taking the necessary steps to hit the 2020 targets, focusing its efforts on international meetings and creating national committees rather than analyzing whether its actions will do anything to help. There is also no comprehensive monitoring or reporting on whether there is any progress to meeting the 2020 targets.