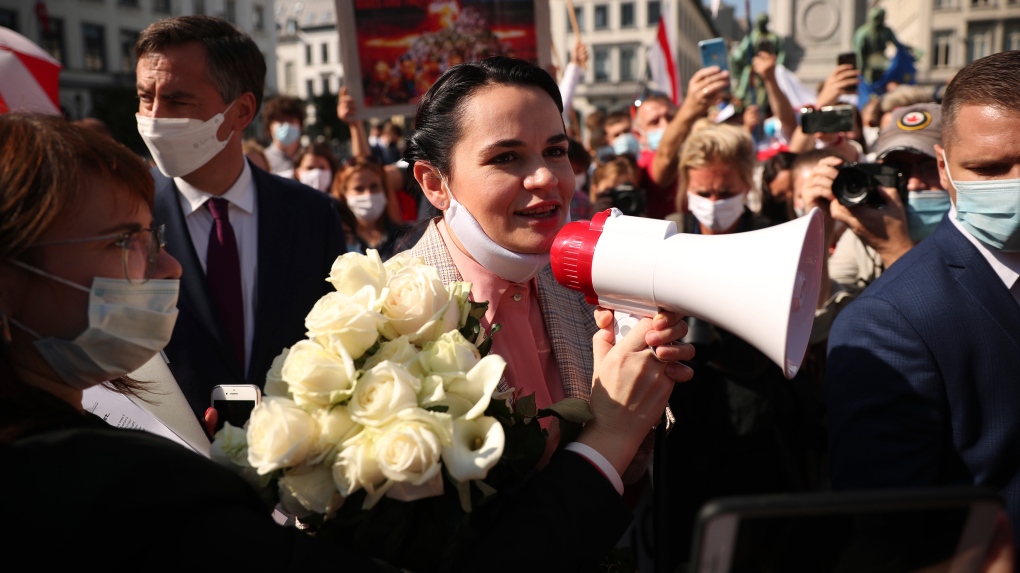 OTTAWA -- The exiled opposition leader of Belarus holds Canada in her heart for its support of her embattled country's pro-democracy movement, Foreign Affairs Minister Francois-Philippe Champagne said Friday after meeting her.

Champagne met with Sviatlana Tsikhanouskaya in the Lithuanian capital of Vilnius, where she fled following an August presidential election that Canada and its allies have called fraudulent.

It was their fifth conversation but first face-to-face meeting since she sought refuge after rallying support against the authoritarian leader of her country, President Alexander Lukashenko, who claimed a sixth term in office in August in a widely discredited election.

Champagne first called Tsikhanouskaya in August, and has since worked with his British counterpart, Dominic Raab to level sanctions against Lukashenko, his family and ministers in response to their violent clampdown on the pro-democracy movement that has taken root in Belarus.

Champagne said that Tsikhanouskaya told him Canada's early support was

"pivotal" in her efforts to keep fighting for democracy.

"It was a very special moment. Sometimes you do things and you don't fully appreciate the impact," Champagne said in a teleconference from Vilnius.

"I think she holds Canada and our intervention very high in her heart because we were there since Day 1, and we have been consistently engaging with her, engaging with the movement, supporting them at every step of the way."

The U.S. and the European Union have also denounced the election as neither free nor fair, and introduced sanctions against the officials they say are responsible for vote-rigging and a subsequent crackdown on protests.

This was the first visit to Lithuania by a Canadian foreign minister in 24 years.

Champagne wrapped a four-country European tour that focused on major continental security issues such as Belarus, the fighting in Nagorno-Karabakh and the maritime boundary dispute between Turkey and Greece.

Prime Minister Justin Trudeau was also working the phones Friday in support of Champagne's efforts in Europe to bring the Azerbaijani and Armenian combatants in Nagorno-Karabakh to the negotiating table.

Trudeau planned to deliver that message to Turkey's President Recep Tayyip Erdogan as well. Turkey supports Azerbaijan in its fight with Armenia over an area a little smaller than Prince Edward Island that's internationally recognized as part of Azerbaijan but with an ethnic Armenian majority.

Tensions between Canada and Turkey, a NATO ally, are also high because the Trudeau government suspended military export permits to Turkey earlier this month. Champagne ordered an investigation into whether a targeting sensor made by an Ontario company and sold to Turkey is being used in Azerbaijani drones in attacks against Armenian civilians.

Champagne travelled to Greece earlier this week and has agreed to help mediate a solution to its standoff with Turkey over a disputed maritime boundary in the eastern Mediterranean. Tensions have risen in that dispute this week after Turkey deployed a research ship, Oruc Reis, into the disputed waters.

"Canada was at the heart of all the key discussions in Europe this week," said Champagne.

"You will see Canada being more engaged with a number of countries of the European Union to tackle some of these very complex issues and the flashpoints we have seen emerging."

From Lithuania, Tsikhanouskaya has warned the government in Minsk that she will call a countrywide strike in Belarus later this month unless Lukashenko resigns, releases political prisoners and stops his government's violent crackdown on protesters.

On Friday, Belarusian authorities announced they had issued an arrest warrant for Tsikhanouskaya, accusing her of "attempts to overthrow constitutional order" and threatening Belarus' national security.

The announcement followed reports that she was on the wanted list in Russia. Moscow has staunchly backed Lukashenko through two months of protests that denounced the election as rigged. Moscow has refused to talk to Tsikhanouskaya or other opposition activists.

Champagne also met his counterparts from Lithuania and its Baltic neighbours to the north -- Estonia and Latvia.

This report by The Canadian Press was first published Oct. 16, 2020.