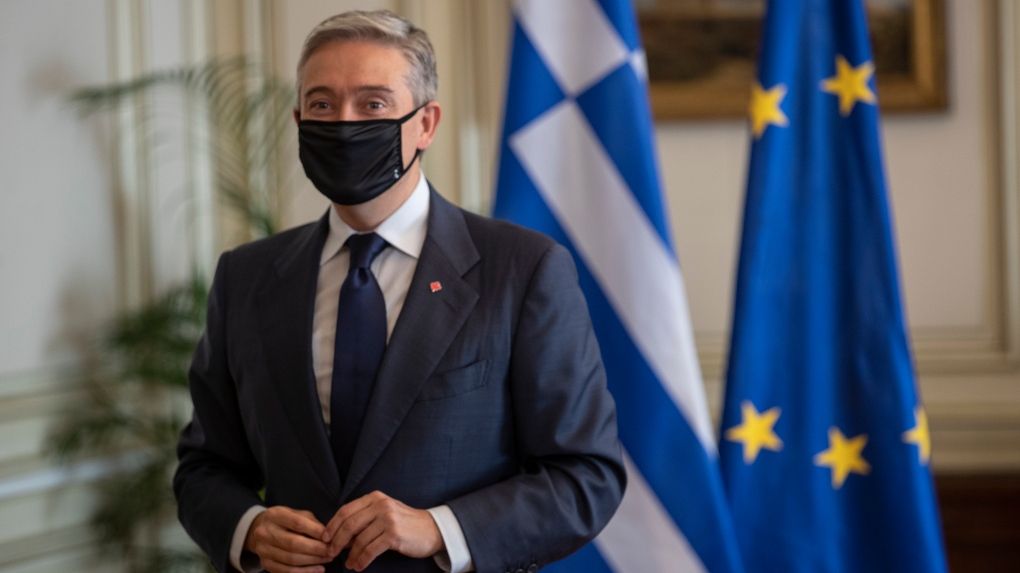 Canadian Foreign Minister Francois-Philippe Champagne, stands in front of a Greek and a European flag as he waits to meet the Greek Prime Minister. in Athens, on Tuesday, Oct. 13, 2020. (AP Photo/Petros Giannakouris)

Champagne said that after travelling to Greece on Tuesday and meeting the country's prime minister and foreign minister, Canada is prepared to help mediate a solution between its two NATO allies.

"We have COVID as the backdrop, we have the health crisis in front of us, which we're living through, and now we have these security flashpoints which are happening, and therefore we need to pay attention," Champagne said in a telephone interview Wednesday as he travelled to Belgium.

Champagne is making his third stop on a four-country European trip that is focused on a series of security threats facing the continent.

They include the Turkey-Greece dispute, which is undercutting the solidarity of the 30-country NATO military alliance, as well as the fighting between Azerbaijan and Armenia and the discredited August presidential election in Belarus that has forced the country's opposition leader into exile.

Champagne said he would be discussing the details of any Canadian contribution during talks Thursday in Brussels. At NATO headquarters, Champagne met with Secretary-General Jens Stoltenberg and held a video meeting with the EU's foreign policy chief Josep Borrell.

Borrell tweeted that his talk with Champagne was "a good opportunity to exchange views on several issues" including the Azerbaijan-Armenia fighting, Belarus and the Turkey-Greece maritime dispute. Borrell said the discussion reinforced "the strong co-operation" between the EU and Canada.

Champagne started the week in Athens, before moving on to Vienna where the Organization for Security and Co-operation in Europe is trying to find political solutions to the Azerbaijan-Armenia fighting and continuing clampdown on protesters in Belarus.

Earlier this week, Turkey sent a research ship, Oruc Reis, into disputed waters in the eastern Mediterranean, which inflamed tensions with Greece and Cyprus. Greece and Turkey are longtime rivals despite their shared membership in NATO.

Germany and the United States have denounced the Turkish action against Greece.

"When you see the latest move by Turkey, moving its ship back into water, all of that suggests that we need to pay a lot of attention," Champagne said.

Turkey's President Recep Tayyip Erdogan lashed out at Greece and Cyprus on Wednesday, saying the deployment of the Oruc Reis was giving them the response they deserve for not living up to previous commitments they made in talks with NATO and the European Union.

Canada and Turkey have their own tensions after Champagne suspended arms exports to the country.

Turkey supports Azerbaijan in its fight with Armenia over the disputed region of Nagorno-Karabakh -- an area a little smaller than Prince Edward Island that's internationally recognized as part of Azerbaijan but with an ethnic Armenian majority.

Champagne is awaiting the outcome of an investigation into whether a targeting sensor made by a southern Ontario company and sold to Turkey is being used in Azerbaijani attacks against Armenian civilians.

Last week, Champagne warned his Turkish counterpart, Mevlut Cavusoglu, that Turkey should stay out of the Azerbaijan-Armenia conflict. Turkey, Armenia's neighbour to the west, says it is not directly involved.

Champagne said Wednesday he'd follow up with Cavusoglu in the coming days after his meeting this week with Greek Prime Minister Kyriakos Mitsotakis and his foreign minister, Nikos Dendias.

"It seems that in light of recent events in different parts of the world, that we need to have a political mechanism to resolve differences within the NATO alliance," Champagne said. "Canada has been trying to play a constructive role by providing, for example, thought leadership on a mediation mechanism."

Champagne's trip ends Friday in Lithuania, where he will meet with Belarusian opposition leader Svetlana Tikhanovskaya. She has taken refuge in Vilnius after what Champagne has called a fraudulent election victory by the authoritarian leader of Belarus, Alexander Lukashenko.

Champagne will also take part in a "mini summit" because his host in Vilnius has invited the foreign ministers of Latvia and Estonia for talks on Baltic security and helping the struggling and battered democracy movement facing threats on the streets of Belarus.

"Obviously, we see increasing violence, from one weekend to the other. Demonstrations are continuing," he said.

This report by The Canadian Press was first published Oct. 15, 2020.