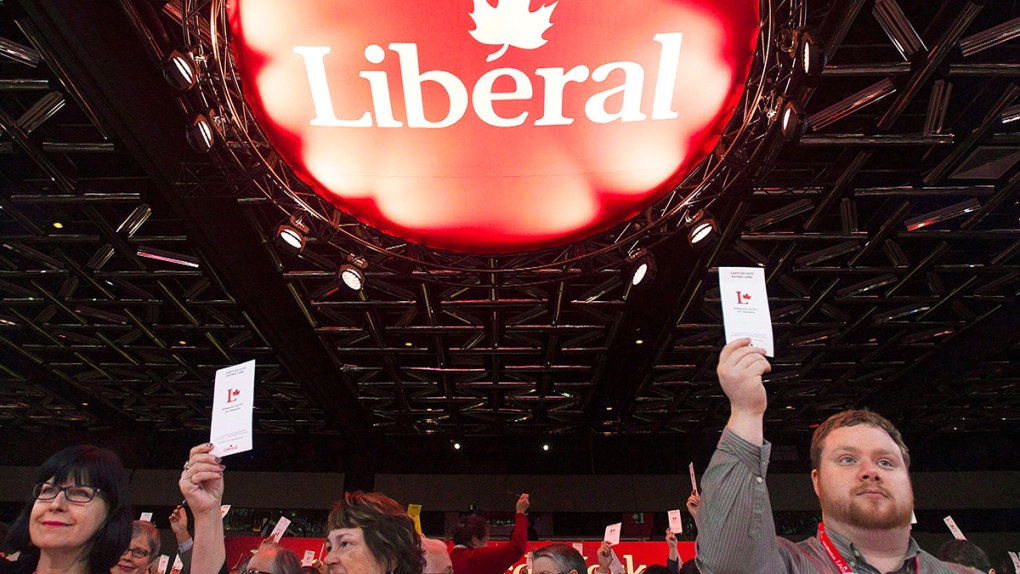 Party members were able to submit policy resolutions that fit party criteria of being national in scope, Charter compliant and not duplicating a previous commitment.

This weekend Liberal Party members from across Canada will convene in Halifax for its last national convention before the next election. One of the top things on the agenda is voting on potential platform policy.

This year, the federal Liberals took a new approach to their policy process. Party members were able to submit policy resolutions that fit party criteria of being national in scope, Charter compliant and not duplicating a previous commitment. Each region of the country and other party committees were allotted a certain number of ideas to bring forward. These were then whittled down by an online voting process that the party says just under 6,000 party members participated in. The outcome was selecting the top 30 issues that will take priority at convention.

Of the 30 policy ideas, delegates will determine the top 15 that will be sent to the national platform committee for consideration as policy planks for the 2019 campaign. The sponsors of each policy piece are able to pick three party members to speak in favour of their resolution on the floor of the convention. There is also the possibility for emergency resolutions to be allowed, if necessary.

Here’s a full breakdown of the 30 policy resolutions Liberal Party of Canada members will be voting on at its Halifax convention this weekend:

Moved by the National Women’s Liberal Commission, this resolution seeks to have the federal Liberals commit to eliminating tax havens and tax avoidance schemes. It also recommends working with other countries to establish an international reporting requirement for multinational corporations. The movers of this resolution argue that these schemes result in major losses in government tax revenues, and contribute to the concentration of wealth and power.

Cracking down on offshore tax havens

The Liberal Party B.C. wing wants legislation to get rid of tax loopholes and recover money from offshore tax havens. It proposes higher penalties, including criminal sanctions for those who promote tax avoidance to their clients, and more funding to the Canada Revenue Agency to crack down on this problem. In putting forward this resolution, the B.C. Liberals argue stashing cash offshore threatens democracy and fairness.

The Senior Liberals’ Commission says there is still a shortage of quality, mid-skilled jobs for middle-aged and younger Canadians. It is calling for the identification of opportunities and sectors for new job creation, and what sectors Canada can compete in globally, with the aim of helping younger generations find and maintain jobs.

Launching a leave to study program

The Liberals Party of Canada's Ontario members want the establishment of a “leave to study” program. This program would allow employees who have been with their employer for a year, to take a leave of absence to build on their skills. During this time participants would receive financial compensation through Employment Insurance for a period of up to six months.

As the gap between the rich and the poor continues to grow, and jobs are lost to technological advancements, the Liberal Party's Quebec wing argues that people are continuously forced to find new jobs. To provide workers some stability, it’s calling for the development of a universal guaranteed minimum income model that could potentially replace other existing federal and provincial government benefits.

With the goal of improving economic prospects in the region and getting young people working in Atlantic Canada, the Liberal Party's Nova Scotian members are calling on the federal Liberals to push for the adoption of a pilot program that matches post-secondary institutions with employers according to the needs and trends of Atlantic Canada’s labour market.

Diversifying the economy in rural Canada

Highlighting the shortages of educated labourers in some rural regions, the Liberal Party of Canada in Newfoundland and Labrador is calling on the federal government to identify potential labour needs in industries that could help diversify rural economies, and then increase support for post-secondary education in those areas.

The Senior Liberals’ Commission is calling for the acceptance of the health reform recommendations that were part of the 2015 Naylor report on healthcare innovation. The resolution also calls for providing better access to family doctors, reducing wait times for specialists, and making the delivery of health services more efficient.

At the Liberals’ last policy convention, the party passed a resolution to implement a national pharmacare before 2019. With the government to yet do so, the National Caucus is calling on the Liberals to amend the Canada Health Act to add prescription medicines to the definition of covered services and create a single-payer drug plan.

The Nova Scotia Liberal wing wants the party to commit to amending the Canada Health Act to include mental health services within Medicare. Not only are the Liberals being called on to institute universal mental health services, but also to launch a five-year pilot program to evaluate the cost and effectiveness of community-based initiatives across the country.

The National Caucus argues that, as evidenced by the opioid crisis, drug abuse is a health issue, and should be treated as such. Citing the Portugal decriminalization model, the call to action is twofold: increase harm reduction services, and re-classify low-level drug possession and consumption charges so that they’re considered administrative rather than criminal violations. Recently, the Canadian Mental Health Association issued a policy paper arguing that decriminalization is key to solving the opioid crisis.

Given that Canada has 7 per cent of the world’s renewable water, and global drought is expected to increase in the coming decade, the Quebec Liberals are calling for the recognition of freshwater as a Canadian heritage asset. The resolution also urges further steps to be taken to regulate water conservation at the federal and provincial levels.

The National Women’s Liberal Commission is calling for the establishment of a Canadian environmental bill of rights, arguing that Canada has fallen short of providing adequate environmental protection. The resolution argues that this legislation would help educate and inform Canadians so they could participate in environmental decision-making.

The Senior Liberals’ Commission argues that urgent and active leadership is needed on environmental sustainability. More precisely, they want to see the establishment of long-term goals that account for all aspects of the environment while balancing economic activity and environmental protection.

The Manitoba wing of the federal Liberal Party wants to see the federal Liberals take a page out of the Obama 2015 playbook and create a Tax Credit Program to drive up clean energy investment across the country. The resolution argues more jobs are created from investment in renewables than from fossil fuel spending.

The Liberal Party's Nova Scotia wing argues that Canada needs to reaffirm its leadership position in oceanic research, given that our country has the longest coastline in the world. To achieve this, the Liberals are being urged to have the government commission a Three-Oceans Policy for environmental protection and social/economic development. Also, given that there are currently telecommunications cables laid through the Canadian Arctic, the government is urged to make internet access a requirement for any of these cables to allow for more access for Canadian Arctic communities.

The Liberal Party of Canada in Saskatchewan is calling on the development of a policy on restorative justice, arguing that restorative justice and rehabilitation should be the first priority of all justice personnel, rather than incarceration or other social control solutions.

Moved by the Young Liberals, this resolution calls for the repealing of Harper-era changes to sex work laws, and to consult with sex workers and stakeholders on decriminalizing consensual sex work for Canadians 18-years and older. The Young Liberals argue the current regime puts sex workers at risk and doesn’t address underlying issues such as access to sexual health care and their relationship with police.

Rather than have seniors’ issues dealt with in a fragmented way by different ministers and federal departments, the Liberal Party of Canada in Alberta wants to see the establishment of a Ministry of Seniors that would promote seniors’ interests and develop national standards for seniors’ programs.

The Young Liberals of Canada are calling on the Canadian government to pass legislation to remove tariff code taxes from essential menstrual products. The Young Liberals’ argue these taxes represent gender-based discrimination.

To protect Canadians whose employers have failed to pay their full pensions, the Liberal Party's Ontario wing wants the government to develop and implement an Employee Pension Protection Strategy. This strategy would be aimed at protecting employees whose employers are undergoing bankruptcy proceedings.

The Liberal Party's Albertan members want support for the principle that public low-income housing should not exceed 30 per cent of a person’s gross annual income and are calling for a funding program to modify current housing complexes to meet health, safety, and accessibility codes.

The federal Liberals are being asked to back a resolution from the Indigenous Peoples’ Commission, calling for a partnership, with Indigenous and provincial governments, to bring high-speed internet to rural and remote communities by 2025. The Commission argues that internet access can help strengthen Indigenous communities, both economically and culturally.

The Liberal Party of Canada in Newfoundland and Labrador is calling on the Liberals to encourage the government to consider all funding models for building a Newfoundland-Labrador fixed link. The resolution suggests that long-distance subsea tunnel technology has advanced significantly and the creation of a fixed-link would be an economic boon.

To improve the efficiency, reliability and affordability of energy for Canadians, the Liberal Party's Manitoba wing is calling on the federal Liberals to commit to the creation of a modern Canadian energy grid. The resolution suggests a major benefit would be a shift towards cleaner energy sources, and lay the groundwork for mass adoption of electric vehicles.

The Liberal Party of Canada in Alberta is calling on the federal Liberals to urge the government to make a bold move in backing the natural resource sector by implementing a strategy to achieve Canadian oil and gas independence. Rather than importing mass quantities from other countries, the aim is to solely use Canada’s own natural resource reserves.

This resolution is in response to changes proposed by Transport Canada to reduce pilot fatigue, which would limit shift lengths for pilots. The Liberal Party's Yukon wing argues that this “one size fits all” approach is a particular concern for northern and remote society services, because it will negatively impact the efficiency and effectiveness of medevac services. Before implementing these changes across the country, they’re calling for more focus on the unique state of northern and remote environments compared to southern Canada.

The Liberal Party's Newfoundland and Labrador members argue that many remote and rural areas in Canada are currently too dependent on food imports rather than local production. As such, they want to see the development of strategies and technologies to increase local food production and maximize the use of local labour and resources.

The National Women’s Liberal Commission is urging the Liberals to sign and ratify the Treaty on the Prohibition of Nuclear Weapons, which has the goal of worldwide elimination of nuclear weapons, and will come into force once 50 countries have signed it.