'An act of terror': Trudeau responds to Brussels attacks

Speaking to reporters on Parliament Hill on Tuesday, Trudeau firmly condemned the attack, which he called an "act of terror."

"Like all Canadians, I was outraged when I woke up to the news that so many innocent citizens have been killed and injured," Trudeau told reporters. "What happened today in Brussels was an act of terror. Its goal was to take lives and instill fear."

The prime minister urged action against terrorist threats worldwide, and said the Canadian government has offered "all possible assistance" to Belgian officials.

"This cannot and will not be tolerated," he said. "Those responsible for carrying out these senseless attacks must be brought to justice."

Trudeau also took a moment to express his condolences, suggesting the focus, in the immediate aftermath of the attacks, should not be retaliation.

"Today, though, we mourn," he said. "We mourn the loss of so many victims, victims whose hopes were our hopes, whose dreams were our dreams.

"Our thoughts and prayers are with the people of Belgium."

Dion: 'A black Tuesday in Belgium'

In a press conference earlier Tuesday morning, Foreign Affairs Minister Stephane Dion described the attacks as a "black Tuesday in Belgium," and said that his thoughts were with the victims and Canada's allies in Belgium and the rest of Europe.

"Hearing the screams of children in the smoke of the Brussels metro only strengthens our resolve to combat terrorism in all its forms," Dion said. "We join the prime minister in adding our thoughts and deepest sympathies."

Dion and Public Safety Minister Ralph Goodale said there was no indication, at the time of their comments, that Canadians were involved in the explosions.

"There is no reason to believe that that threat level for Canada should in any way be changed," Goodale added.

However, the minister did urge Canadians to remain vigilant, and said the RCMP and police are "on their guard."

"If you notice anything that you consider to be unusual or out of the ordinary then you should report that circumstance to the police," he said.

Other Canadian leaders expressed sympathy and solidarity after the attacks as well.

These egregious acts of terror assault all civilized values. My thoughts are with all of Belgium and Europe.

And NDP Leader Tom Mulcair also sent his "prayers and love" in a statement.

"We stand, united with the world, in grieving this loss of life and in condemning these despicable acts of violence," he said.

Kenney: 'Is Canada at war with ISIS?'

Conservative interim Leader Rona Ambrose issued a statement condemning the attacks that, she said, "reinforces our resolve as Canadians to stand up to this scourge; to root out terrorist networks; and to take the fight to those who wish to do us harm."

During question period on Tuesday afternoon, Conservative MP Jason Kenney referred to the attacks when pressing the Liberal government on its plan to fight what he called a "genocidal cult."

Islamic State militants have claimed responsibility for the Brussels bombings.

"My question: Is Canada at war with ISIS? And if so, why did we end our combat operations against that terrorist organization?" Kenney asked.

In response, Foreign Affairs Minister Dion defended the government's decision to pull Canadian fighter jets out of Iraq and Syria and expand on-the-ground efforts instead.

"I think it's been very clearly expressed that we may have different views about how to optimally fight this awful Islamic State," Dion said. "(Our decision) has been well-received by the coalition and today is not a day to make politics about that."

World leaders react to the attacks

More than two dozen people were reported dead in the attacks as of Tuesday afternoon, local time, and Belgium's terror alert was raised to its highest level.

On Twitter, Belgian Prime Minister Charles Michel condemned the attacks and said the country stands together against the violence.

I strongly condemn these hateful attacks. Our thoughts go out to the victims and their families. We stand united against terrorism.

The blasts occurred just days after police captured a high-profile suspect who is believed to have been involved in the November terrorism attacks in Paris.

In a statement on Tuesday, French president Francois Hollande said France and Brussels are "linked" in this horror, and called for action against terrorism.

Hollande tweeted in French, too, describing his "full solidarity with the Belgian people.

"Through the attacks in Brussels, all of Europe has been hit," he wrote.

The mayor of Paris, Anne Hidalgo, also expressed her condolences and announced that the Eiffel Tower would be lit in the colours of the Belgian flag as a display of support.

Elsewhere in the world, U.K. Prime Minister David Cameron also shared a message online, writing that he was "shocked and concerned by the events," and pledging to do everything to help.

I am shocked and concerned by the events in Brussels. We will do everything we can to help.

U.S. President Barack Obama commented during his speech Tuesday in Cuba, where he is travelling on a historic visit.

"We will do whatever is necessary to support our friend and ally, Belgium," he said. "This is yet another reminder that the world must unite, we must be together, regardless of nationality or race or faith, in fighting against the scourge of terrorism."

In Germany, Chancellor Angela Merkel's chief of staff, Peter Altmaier said in a statement that "terrorists will never win."

Donald Tusk, the president of the European Council, wrote on Twitter that the European Union "returns Brussels' solidarity" and vows to help the city counter terrorism.

The official Twitter accounts for the European Parliament and the European Commission also issued messages, expressing worries about the situation, and pledging to stand united against terrorism. 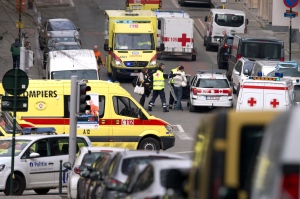