OTTAWA -- Current Justice Minister and Attorney General David Lametti said there has been no evidence to justify a committee investigation into whether or not Prime Minister Justin Trudeau or anyone in his office tried to have former justice minister Jody Wilson-Raybould abandon the prosecution of a case against SNC-Lavalin.

"All we've heard are allegations in a newspaper," Lametti, who replaced Wilson-Raybould when she was shuffled into the Veterans' Affairs portfolio last month, told CTV's Question Period host Evan Solomon.

"The prime minister has said that these allegations are false. We haven't had any corroborating evidence there. There hasn't been anything to my mind that justifies a committee investigation."

Despite this stated view, Lametti said that "it's up to the committee to do what it wants to do."

The opposition parties are pushing for an emergency meeting of the House Justice Committee to consider a motion that would call on Wilson-Raybould, Lametti, and several other high-profile government officials to testify.

"I'll let the committee decide. The committee is the master of its own docket. But certainly from what I have seen, and what the prime minister has said, I can reassure Canadians that there has been nothing inappropriate that has happened," Lametti said.

The call for this study was prompted by a bombshell Globe and Mail report that the Prime Minister's Office tried to get Wilson-Raybould to ask prosecutors to make a deal in the corruption and fraud case against the Quebec-based engineering and construction company.

According to the Globe, Wilson-Raybould was unwilling to play along and did not follow through despite the high-level pressure. CTV News has not independently verified the story.

The bombshell report prompted intense backlash in the House of Commons, with the Conservatives framing Wilson-Raybould's ministerial move as a demotion for not following the PMO’s orders, while the NDP said the Globe’s report proves that the Liberals offer special treatment to their wealthy friends.

Among the staffers that the Conservatives and NDP want to hear from at the committee: Principal Secretary to the Prime Minister Gerald Butts; Senior Advisors Elder Marques and Mathieu Bouchard; and Wilson-Raybould’s chief of staff Jessica Prince.

"Given the disturbing reports of political interference by the Prime Minister's Office in the functions of the Attorney General of Canada, and given the minister of Veterans Affairs recent comments that ‘It is a pillar of our democracy that our system of justice be free from even the perception of political interference and uphold the highest levels of public confidence, the committee hold no fewer than four meetings," reads the motion.

On CTV's Question Period, Conservative Deputy Leader Lisa Raitt said that because these allegations have been made, it's incumbent that the committee hears from those believed to be involved to get a full picture of what happened.

NDP MP Nathan Cullen echoed this, calling the committee vote on the motion "the moment of truth."

He said if nothing happened, they should be comfortable coming before the committee and saying so.

"Until we get answers we need to try every tool in the toolbox to try to pull those answers out of government," Cullen said. 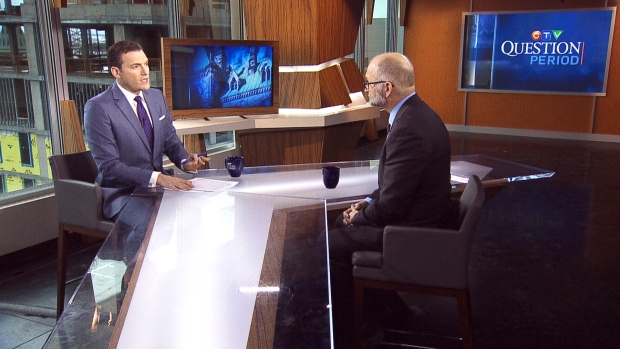 No need to recuse, yet

Lametti said he is basing his denial -- and the denial repeated from various Liberals over the last few days -- that there was "no direction and no pressure" on the words of the prime minister.

"The prime minister has said that he did not direct my predecessor, so I'm basing it, I'm basing it on what he has said publicly," Lametti said.

Asked if he thinks he should recuse himself from the matter as the current AG, Lametti said he sees "no reason."

"There hasn't been any reason to recuse myself in any discussions that I have privy to up until now. Obviously, if there is ever a case where I feel that there's some sort of conflict, personal conflict on my part, or situational conflict, I'll recuse myself. But I don't see any now. I certainly haven't seen any yet," Lametti said.

The NDP have asked Conflict of Interest and Ethics Commissioner Mario Dion to investigate this case.

"Obstruction of justice charges have been brought against Canadians with far less evidence than we already have here," Cullen said.

In an email to CTV News, former ethics czar Mary Dawson said that while the time it takes to complete an investigation can vary based on the circumstances, "it usually, but not always, takes more time than six or seven months" for an investigation to be completed.

Hasn't spoken to his predecessor

Cullen said that Wilson-Raybould's silence so far has meant many outstanding questions have remained unanswered.

"Who spoke to Jody Wilson-Raybould about this SNC-Lavalin case? Did they ask her to take this plea option out which would give the opportunity to the company for billions of dollars in contracts? And was it because of that refusal… was she then fired?" Cullen said.

On Friday Wilson-Raybould said as the former AG she is "bound by solicitor-client privilege in this matter."

Asked if he had spoken to his predecessor about whether or not she felt pressured regarding this case, Lametti said he hasn't, and doesn't plan on doing so.