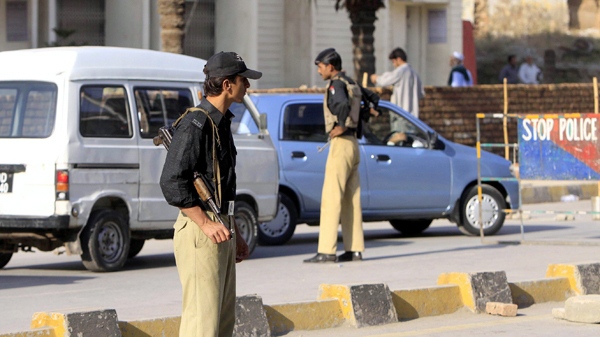 A police officer searches a car as another observes the area at a checkpoint in Peshawar, Pakistan, on Saturday, Oct. 31, 2009. (AP / Mohammad Sajjad)

ISLAMABAD, Pakistan - Pakistani soldiers closed in on two major Taliban strongholds in South Waziristan on Saturday, officials said, as government jets pounded insurgent hide-outs and the prime minister said the country had no choice but to defeat the militants.

"We are at war," Prime Minister Yousuf Raza Gilani told a press conference in the city of Peshawar, where a militant car bombing a few days ago killed more than 115 people. "Our civil leadership, our military leadership and political leadership ... we are on the same page that we have to fight the militancy. We do not have any other option because their intentions are to take over" the country.

Pakistan, which years ago helped nurture the Taliban's rise in neighbouring Afghanistan, is now involved in an escalating fight with the militants. Two weeks ago, the government launched the offensive in the South Waziristan tribal region, viewed as the main stronghold in the country of both the Taliban and al-Qaida. The offensive has drawn retaliatory militant attacks across Pakistan.

On Saturday, seven paramilitary soldiers driving through the Khyber tribal area were killed in a roadside bomb planted by suspected Taliban militants, said local official Ghulam Farooq Khan. The area is famed for the Khyber pass, the main route for ferrying supplies to U.S. and NATO forces in Afghanistan.

That attack came as Pakistani jets bombed three hide-outs of Pakistani Taliban leader Hakimullah Mehsud in the Orkazai tribal region, killing at least eight militants and wounding several others, intelligence officials said. Another airstrike, about 70 kilometres from the first and near the Afghan border, killed seven militants in the Kurram tribal region, the officials said.

The veracity of the reports could not be confirmed. Authorities have effectively sealed off the tribal areas, semiautonomous regions where the central government in Islamabad has long had only minimal authority, and it is all but impossible to independently verifying such claims.

Pakistan appears eager to prove that it is moving aggressively against the militants after a three-day visit earlier this week by U.S. Secretary of State Hillary Rodham Clinton.

Clinton said she found it "hard to believe" that no one in Pakistan's government knew where al Qaeda's leadership was hiding and warned that once the current offensive is finished, "the Pakistanis will have to go on to try to root out other terrorist groups, or we're going to be back facing the same threats."

American officials have long said al Qaeda leader Osama bin Laden and his top lieutenants accused in the Sept. 11, 2001, attacks operate out of the region along Pakistan's border with Afghanistan -- a region that includes South Waziristan.

Pakistan has publicly reacted to Clinton's chiding with a mixture of acceptance and resentment.

"If we are honest, we cannot deny that much of what she said was true," The News newspaper said in a Saturday editorial, but added that U.S. policies -- like foreign policy anywhere -- stem from self-interest.

"There is nothing noble about Washington's focus on Islamabad. But it is possible that at this particular moment in history the interests of both nations coincide," the newspaper said.

In South Waziristan, the army said it had surrounded the key Taliban stronghold of Sararogha on three sides and had reached the outskirts of Makeen, which it called "the nerve centre" of the Pakistani Taliban.

Government soldiers had killed a total of 33 militants over the past 24 hours, discovered a factory for making roadside bombs and seized a handful of weapons, the army said in its Saturday statement.

Pakistani forces were facing stiff resistance in the village of Kaniguram, with soldiers fighting house to house and taking mortar and sniper fire as they searched for more militants.

Four Pakistani soldiers had been injured in fighting in South Waziristan over the past day, the report said.

In Karachi, police arrested three suspected militants Saturday and seized 30 kilograms of explosives and other weaponry. The men were involved in kidnappings for ransom and bank robberies to help fund the Taliban, said senior police officer Fayyaz Khan.

In North West Frontier Province, the local government said it was reopening schools starting Monday, two weeks after schools across the country closed when the offensive set off a string of retaliatory attacks.

"There are (general) security threats, but we will fight back," Mian Iftikhar Husain, the provincial information minister, told reporters in Peshawar. Most of Pakistan's schools reopened last week.