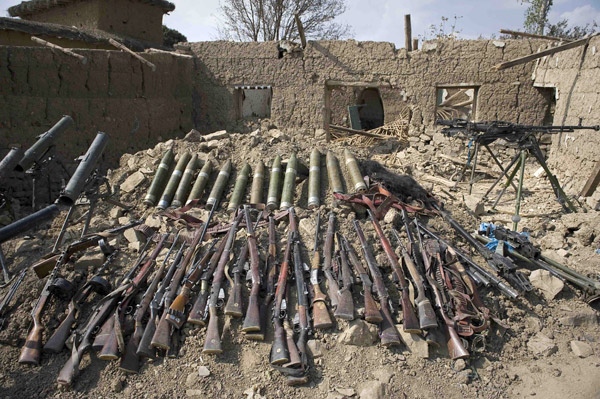 Seized weapons and ammunition recovered during Pakistani military operations against Taliban militants are displayed on the ground at the Sherwangi Tor village in South Waziristan, Pakistan on Thursday, Oct. 29, 2009. (AP / Nicolas Asfouri)

ISLAMABAD, Pakistan - Pakistani forces are closing in on a major Taliban base inside the militant stronghold of South Waziristan, the army said Friday, while announcing it had killed 14 militants in a day of fighting.

The reported advances came as visiting U.S. Secretary of State Hillary Rodham Clinton, in a series of public appearances, saw firsthand how angry many Pakistanis are about America's military policies in the region.

The Pakistani military launched a ground offensive earlier this month in the rugged, tribally controlled region of South Waziristan, where the Pakistani Taliban are based and are believed to shelter al Qaeda leaders.

It has deployed about 30,000 troops against some 5,000 to 8,000 militants, a top general said Thursday during a rare visit to the battle area by journalists. His estimate included up to 1,500 foreign fighters, most of them Uzbeks.

In a statement, the army said its soldiers now control the hills above the village of Sararogha, a reputed base where Taliban leaders have long operated openly -- occasionally even using it for news conferences. The army said 14 militants had been killed, along with two Pakistani soldiers.

A total of 289 militants and 34 government soldiers have been killed in the offensive, according to a tally of army figures. Six more militants have been arrested.

Access to South Waziristan is heavily restricted, so independently verifying death tolls from fighting is all but impossible.

Clinton's Wednesday arrival in Pakistan coincided with a market bombing in the northwestern city of Peshawar that killed more than 100 people and underscored the threats posed by militants to the stability of the nuclear-armed nation.

On Friday, Clinton held a number of public meetings, including one with a group of residents from the tribal region and another with prominent women TV news anchors. Many lashed out over America's military policies, particularly the use of U.S. drones to attack militant targets.

During one live broadcast interview with Clinton, an audience member said the drone attacks amounted to "executions without trial" for those killed.

On Thursday, during the journalists' visit to South Waziristan, the army displayed a German passport apparently belonging to a suspect in the 9/11 attacks. They showed off another passport, from Spain, bearing the name of a woman who Spanish media have reported is married to an alleged al Qaeda member from Morocco suspected in both the 9/11 attacks and the 2004 Madrid train bombings.

On Friday, Maj. Gen. Athar Abbas, the army's chief spokesman said the passports "have been handed over to the intelligence agencies for further investigations."