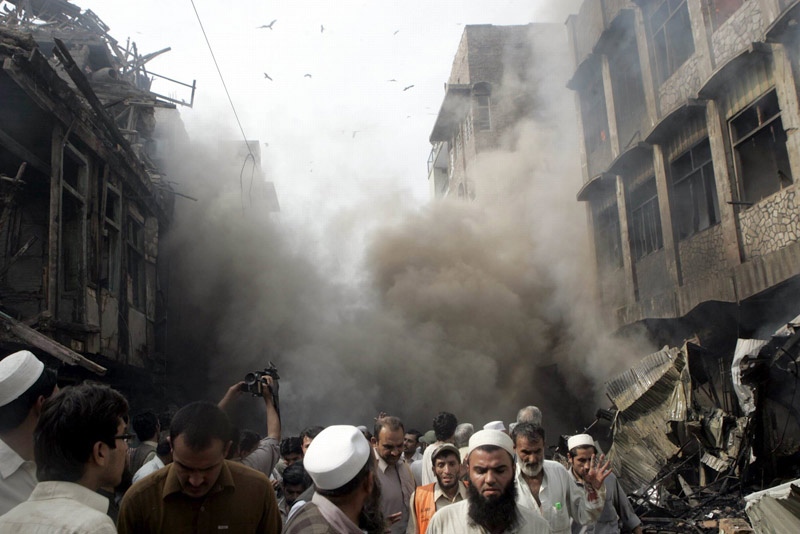 People gather at the site of a car bomb explosion at a market in Peshawar, Pakistan on Wednesday, Oct. 28, 2009. (AP / Mohammad Sajjad)

Just hours after U.S. Secretary of State Hillary Clinton arrived in Pakistan on her first diplomatic mission there, a car bomb ripped through a crowded market killing 100 people.

The powerful blast in the city of Peshawar in northwestern Pakistan also wounded more than 200 people.

The attack targeted a large market that sells products mostly geared to women, and it is believed that most of the victims were female.

Dozens of shops were set on fire by the blast, some buildings collapsed and a massive cloud of grey smoke floated over the city.

At the scene of the attack there was chaos as the wounded struggled in the debris and wreckage from the blast, and others tried to pull survivors from the twisted wreckage of buildings and shops.

The Pakistan government blamed militants for the attack, saying it was likely meant as revenge for a recent army offensive against al Qaeda and the Taliban close to the Afghan border.

The attack occurred just a few hours drive from the capital, Islamabad, where Clinton was visiting in a demonstration of U.S. support for Pakistan's anti-militant campaign.

She told reporters that Pakistan is on the right track in its efforts to combat extremist Islamic militants, and said Pakistan and the U.S. are entering a new era of positive relations.

No group has claimed responsibility for the attack.

Peshawar has seen its share of violence in recent days. This month alone, three bombs have claimed scores of lives -- including one that killed 50 people.