No injuries after Canadian frigate collides with U.S. ship 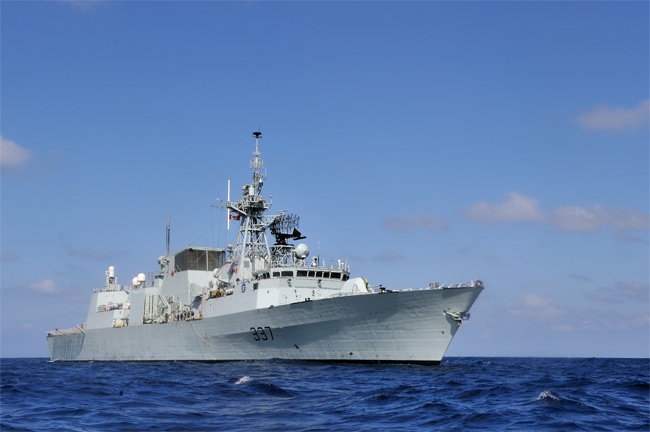 HMCS Fredericton in the Gulf of Aden during counter-piracy operations on Dec. 1, 2009. (Department of National Defence)

HALIFAX - A Canadian navy frigate was headed for a Florida port Friday to assess damage after it hit an American navy supply ship during a joint training exercise.

Canadian navy spokesman Maj. Paul Doucette said no one was injured when HMCS Fredericton and USNS Kanawha scraped during a routine manoeuvre east of Miami on Thursday night.

"They were just about to go into a replenishment at sea, which is basically where two ships come alongside and one is refuelled by the other," said Doucette.

"Somewhere in that process the two vessels touched ... the damage appears superficial -- some dents, scrapes."

Doucette said he had no information about the sea state or weather conditions at the time.

"How the incident evolved, how the ships made contact, for me to say anything would all be very speculative right now," he said.

After a basic inspection, HMCS Fredericton was able to continue on with the exercise overnight before steaming toward Port Everglades, Fla., for a scheduled stop.

Doucette said he wasn't sure what form an investigation into the incident would take.

"At this stage of the game, it's just getting all the accurate information and then go along from there," he said.

HMCS Fredericton was carrying a full crew of 225 but was without a helicopter unit at the time it hit the U.S. navy vessel.

Doucette could not say if any pollution had resulted from the incident or whether fuel lines had disengaged during the replenishment.

USNS Kanawha was returning to its home base in Virginia on Friday.

HMCS Fredericton as well as other Canadian ships involved in the exercise are scheduled to return to Halifax in early December.