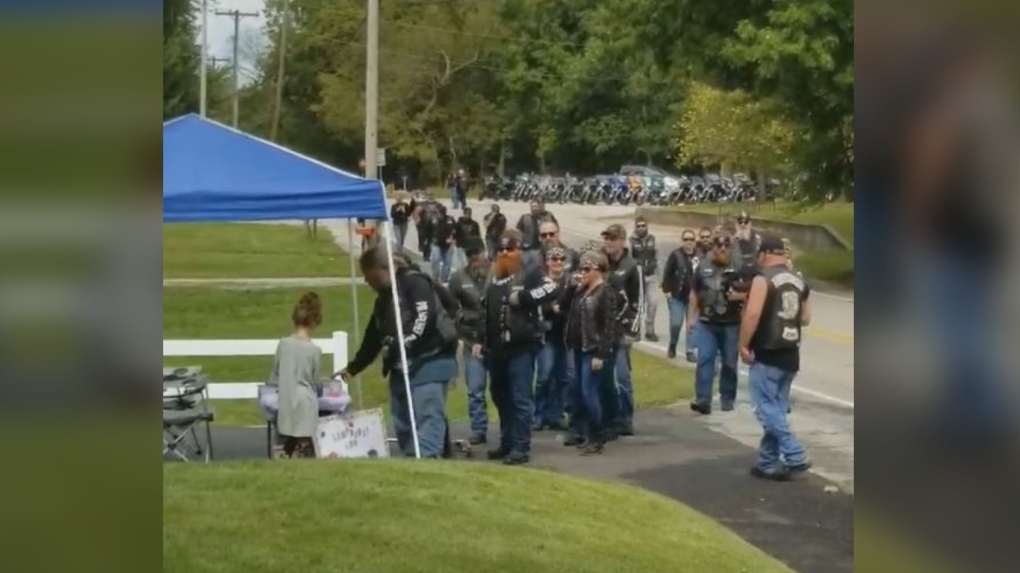 A little Indiana girl running a lemonade stand got quite the surprise from a large group of bikers who stopped by for a drink of the 'best lemonade in the state!' (Phil Shrock)

TORONTO -- An Indiana girl running a lemonade stand got quite the surprise from a large group of bikers who stopped by for a drink of the “best lemonade in the state!”

But these weren’t just a random pack of thirsty bikers. Last September, multiple members of the Milwaukee Iron motorcycle group had been involved in an accident, according to a post by Bryanne’s mother, Daryn Sturch, on Facebook. Sturch, who is also a nurse, told RTV6 earlier this week that she had seen the commotion and “ran up to assist.”

In her Facebook post, Sturch said men and women of this group had been injured in the crash. Turns out, the bikers never forgot about her assistance.

So the bikers came back earlier this week to repay the favour to Sturch and her family.

Bryanne’s grandfather Phil Shrock recorded video of the bikers lined up at the 8 year old’s lemonade stand. He shared the video on Facebook, writing that ever since the accident, the bikers have “been so wonderful to my family.”

Shrock told CTVNews.ca over Facebook Messenger that “the bikers were good people just wanting to show their thanks. And Bryanne was completely surprised.”

Shrock turned to an old adage for what he wants people to take away from the outpouring of love.

“Like the old saying ‘you shouldn't judge a book by its cover,’ it's obvious these people are good people,” he wrote to CTVNews.ca.