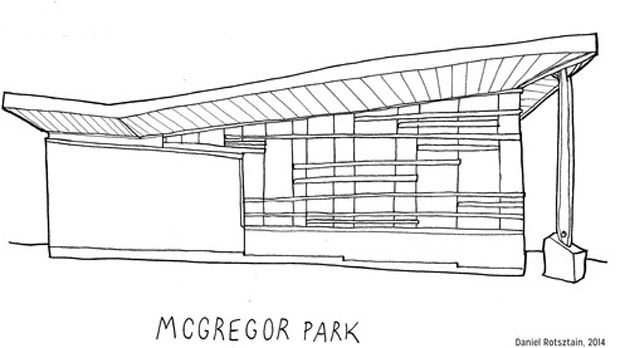 A sketch of the McGregor Park Library is shown. (Daniel Rotsztain)

TORONTO -- In a city with no shortage of significant cultural landmarks, Daniel Rotsztain headed off the beaten track to explore Toronto. The CN Tower was not on the agenda.

Over the course of two months, he visited all 100 branches of the Toronto Public Library, the largest system of its kind in Canada. It's also billed as one of the busiest urban library systems in the world, with more than 18.5 million visitors and more than 32 million items borrowed each year.

Rotsztain took public transit or rode his bike to each location as part of the experience. And rather than simply perusing the shelves, he opted to document each library by drawing the exteriors.

"More than a photograph, there's more character in an illustration," said Rotsztain in an interview at the Wychwood branch in midtown Toronto, which was featured in the 2010 film "Scott Pilgrim vs. the World" starring Canadian Michael Cera ("Arrested Development").

Rotsztain's illustrations -- which also include sketches of two bookmobiles -- are featured in his new book "All the Libraries Toronto" (Dundurn Press).

Readers can also take creative liberties with the guide, which is billed as "yours to colour and explore," yet another entry into the ever-expanding catalogue of colouring books geared towards grownups.

"Adult colouring books are really popular right now -- and I think for a good reason," said Rotsztain, who is an artist, writer and cartographer.

"Social media, the Internet, everyone is jammed with information all the time, and I think people are recognizing the meditative and mental health opportunities in colouring books. It's just this slow analogue process.

"I think everyone's creative, but not in the way that they want to paint their own painting. And I think there's a lot of creativity you can find in colouring books, whether you fill the lines with patterns or you don't colour them perfectly, or -- as some are wont to do -- draw outside the lines."

The book's black-and-white images are accompanied by notable nuggets about each branch, including key geographical details, historical facts and informative tidbits about the buildings and visitors who frequent them.

Among Rotsztain's favourite locations are the Runnymede branch in the west end -- described as "Ontario Gothic meets Harry Potter Hogwarts" -- and Malvern in the northeast, reminiscent of a "Swiss ski lodge -- all blond wood beams, high ceilings and bay windows."

Rotsztain said he was taken aback by how architecturally diverse each location is and how they serve as symbols of their neighbourhoods and communities. He was particularly struck by how many of the city's libraries were housed within malls.

"To me, that shows just how adaptable the library is as an idea. It can meet the people where they're at."

Rotsztain said he thinks the library is among "the most important spaces of the modern 21st century city."

"There's this architectural theory called the third place. It's not home, it's not work, it's a third place that you can meet people -- and I think the library has really filled that role.

"Also, the library's changing. It's less about being this quiet, hush-hush place of study.... They're becoming these gathering spaces, and they're being recognized as neutral and accessible places that people in the community can gather in."